Buss utilizes postponed season as she prepares for freshman campaign 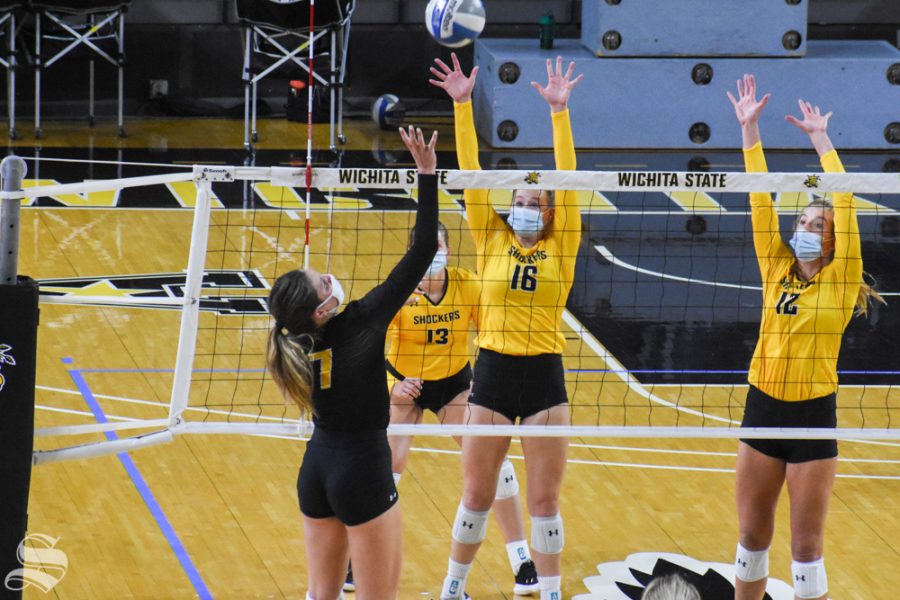 Wichita State sophomore Nicole Anderson attacks the net while freshmen Marriah Buss and Lauren Mcmahon prepare to block during the Black and Yellow Scrimmage on Saturday.

From Lincoln, Nebraska to Wichita, Kansas, Marriah Buss is the latest addition to the Shocker volleyball program.

Growing up in Lincoln, Buss attended Lincoln Lutheran High School in Lincoln, Nebraska and was a four-year starter for the Warriors.  Her impact on the court didn’t go unnoticed as she was a three time first-team all-state recipient and was a first-team all-conference performer in all four years of high school.

During her junior season of high school, Buss won Nebraska Gatorade Player of the Year.  The following season, Buss helped lead the Warrior volleyball program to a 37-3 record and a state championship in her senior campaign.

Outside of her excellent play on the volleyball court, Buss was also an exceptional athlete in track and field. She set the school record in the triple jump at 35 feet, five ½ inches.

Buss decided to take her talents to Wichita State University and become a member of the Shocker volleyball team. After receiving offers from other Division-I schools including Colorado State, Dayton, Missouri and Nebraska-Omaha, Buss committed to WSU.

Buss said the coaching staff played a huge part in making her decision.

“One of the main things that drew me to Wichita State was the coaches,” Buss said. “They’re knowledgeable and personable.”

On Aug. 25, the American Athletic Conference postponed the volleyball season until the spring.

With no games on tap for the Shockers in the fall, Buss said she has been focused on what she needs to improve on before competition.

“I really want to become a better passer and just more knowledgeable with how I am blocking and kind of how my body is moving while blocking and hitting,” Buss said.

While Buss seeks to improve her playing ability, she also wants to be a great teammate and demonstrate good leadership qualities.

“Just (being) there for my teammates always cheering them on through the ups and the downs,” Buss said.

As one of nine true freshmen on the roster, Buss credits her upperclassmen teammates for helping to make the transition from high school to WSU a smooth one.

“Thanks to the older girls and some of the other returners, they make it really inviting and easy to make that transition.”

Shocker volleyball hosted three Black and Yellow scrimmages at Charles Koch Arena this fall. Buss made an impact in each of the three scrimmages, including a 13 kill performance on Sept. 12 and a match-high 15 kill performance in the final scrimmage on Oct. 16.

Buss said she is encouraged that she has played at a high level against her teammates and that she is excited to see how her high level of play will translate into competition in the spring.

“It’s been really encouraging for me to know that I’m able to compete with some of the girls that have been here for a couple of years.”

Buss said she has enjoyed her experience playing under WSU volleyball Head Coach Chris Lamb to this point.

“He is such a great person to be around and has so much knowledge,” Buss said. “He keeps you on your toes for sure.”

Buss is planning to major in sport management at WSU and has aspirations to be a director of fan experience at a power-five Division I sports program in the future.