34 years at WSU: Joe Kleinsasser reflects on the lessons he has learned 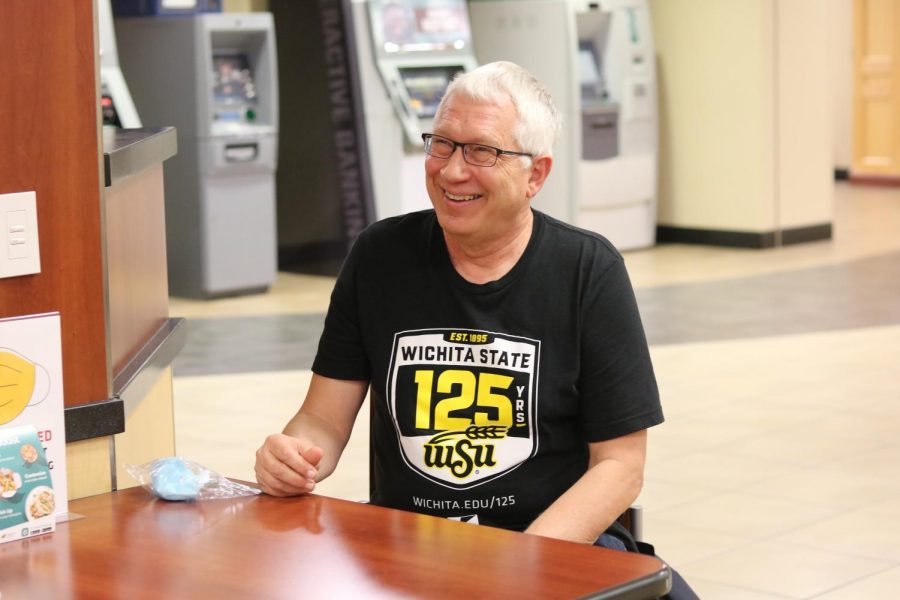 Joe Kleinsasser laughs during an interview with The Sunflower at the Rhatigan Student Center on Monday, Nov. 8. Kleinsasser, the co-director of News and Media Relations at the Strategic Communications office, is retiring in December after 34 years at WSU.

On Joe Kleinsasser’s desk is a book called “The Interesting Things to Remember in Kansas.”

Kleinsasser, the co-director of news and media relations at the Strategic Communications office, makes it a habit to hand it to every new person who walks into his office.

“I tell everybody, ‘Hey, here’s a book I wrote.’,” Kleinsasser said.

When they open it, much to their surprise, every page is blank.

“The joke is that there’s nothing really interesting about Kansas,” Kleinsasser said.

Kleinsasser got the book as a gag gift, but he always finds a way to put it to use— much to his co-workers’ dismays.

“My co-workers always go, ‘No, run!’” Kleinsasser said. “I say, ‘Wait a minute, it’s funny the first time. You’ve just seen it a few times so it’s not as good.’

“When I tell them, ‘I got a million jokes!’ they’ll tell me, ‘No, you have one you tell a million times.’ I say, ‘Well, the key is to have a different audience every time.’”

Kleinsasser is retiring after 34 years at Wichita State. He said during that time period, he’s become known for his humor.

“It helps to have a sense of humor,” he said. “I do like to joke around in the office. I pick on a lot of people, I get picked on a lot.”

Kleinsasser began his college journey at Tabor College in Hillsboro, Kansas. Shortly after graduation, he worked at a Christian radio station in Newton, Kansas for eight years. He soon moved back to Tabor College where he served as the director of information services and publications for three years.

He moved to his job at WSU in 1986. When Kleinsasser initially interviewed, he did not think he was going to get the job.

“When I was hired, I wondered why. I thought, ‘I don’t know how I got here.’,” Kleinsasser said.

He then asked his boss to give him a hint as to why he got chosen over the roughly 70 other candidates.

“She said ‘Frankly, you were one of the only candidates that had both media experience and working in higher education in public education.’,” he said. “So it turns out, the experience I had on both sides, even if it’s small, ended up being a turning point of favor for me.”

Kleinsasser said that he uses that experience to give college students advice.

“Always take the opportunity to do something, even if you don’t know how it’s going to pay off down the road,” he said.

Kleinsasser said in 34 years, he has watched the world change drastically.

“The big invention when I started in ‘86 was the fax machine— we thought that was the greatest thing since sliced bread,” he said. “You can see how much more we’ve come along since the fax machine.”

Working in the news is a hard job, Kleinsasser said. He has to be available for a call 24/7, seven days a week. But through all the long days, he said he believes the local media has grown a respect for him and the Strategic Communications office.

“I have always felt my job is to be as open, accountable, and accessible as possible,” Kleinsasser said. “I think that accessibility with the media has gone a long way towards developing positive relationships with the media and the university because whether they agreed or not they at least knew that someone would talk to them.”

Kleinsasser said that his main job is to give the university a voice.

“I do everything in my power to make sure at least the university has an opportunity to present their perspective, provide background, or whatever the case may be to help people understand,” Kleinsasser said. “If you don’t say something, or if you choose to say nothing, then you leave the media and others to find someone who will.

“I’ve enjoyed it, I respect the media and I think they respect what I do.”

“Within a month and a half after starting in the fall of ‘86, then President Armstrong had my office call a news conference that he would address the media to announce the end of the football program,” Kleinsasser said. “You go from that start to finishing a career in the midst of COVID-19, and of course, the sudden resignation of the president.

“It’s kind of a strange book-end.”

When asked how he built such a good reputation at WSU, Kleinsasser said vulnerability is key.

“It comes about by letting people see when you’re vulnerable, even when you’re hurting or going through challenges in your life,” Kleinsasser said.

Kleinsasser said he believes the way he lives out his Christian faith is another factor in building his good reputation.

“I think my faith has a lot to do with how I live it out, that you love others, you care about them as much as you can knowing you yourself aren’t perfect,” Kleinsasser said.

As he’s in his last month at WSU, Kleinsasser said his main focus is to end on a good note.

“It takes time to build it and you can blow it in a hurry,” he said. “I always told myself when I got to the end, ‘Whatever you do, finish well.’”

Kleinsasser said that he hopes he leaves the office in a place where they can continue to learn and grow.

“You can always build on what the person has previously done … I hope when I leave things don’t go backwards because that means I haven’t done a very good job,” he said.

He said that overall, he is going to miss the people at WSU the most.

“I’ll miss the people, and that’s a good thing because it means that I’ve appreciated who I’ve worked with and what I’ve gotten to do,” Kleinsasser said.

Kleinsasser hopes to spend his retirement spending time with his family, including homeschooling his son.