‘It’s family:’ Amy Schafer closes the door on her time at Wichita State 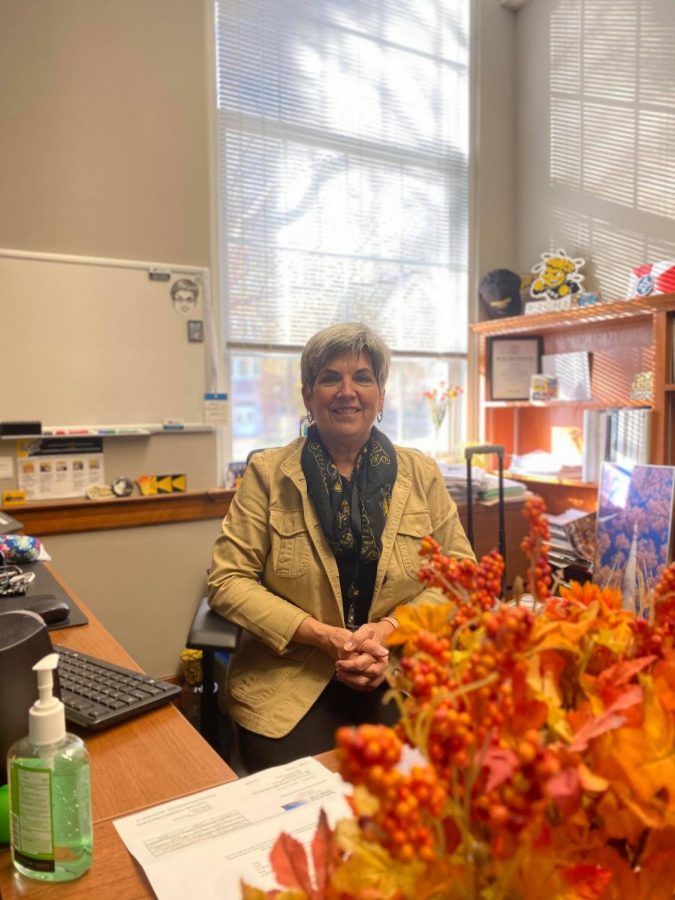 Amy Schafer poses for the camera during her interview with The Sunflower on Friday, Nov. 13.

Amy Schafer, director of advertising for Strategic Communications, had an unconventional start at Wichita State.

Schafer interviewed for a job at the university after she recently had a new baby. She was home alone while her husband was at work and got a call from the university asking if she was still available for an interview that day. Schafer was surprised because she thought that the interview was scheduled for the month after.

She explained that she was stuck at home because her husband had the vehicle and had a newborn with her. They said they’d accommodate her and sent someone to pick her up.

“So I’m getting into a strange car, with a strange man, going to a place I’ve never been before, with my newborn,” Schafer said.

She arrived at the university and the co-op staff watched over her baby while she went in for an interview.

Even though her circumstances were strange, she still dressed to impress and brought her briefcase. While in the interview she realized what she brought.

“In my briefcase was a diaper, a pen, and a resume,” Schafer said.

Once it was finished, she had someone say to her that “anybody who can interview like that, under those circumstances, gets the job.” And that’s what started her career at Wichita State.

After more than 30 years and four different positions at Wichita State University, Schafer is retiring in fall 2020.

“It’s family,” Schafer said about her time at WSU and the people she’s gotten to meet.

Her first job in cooperative relations taught her a lot about the community and the people in it.

“It gave me that networking experience,” she said.

After some time in that position she opted to apply and received the university relations job at WSU where they planned special projects and community relations events. She was in charge of the college’s biggest events and loved meeting the community.

Schafer said she never intended on staying in Wichita this long.

“Five years— that was all,” Schafer said.

But with their kids already in school and not wanting to uproot the family, they stayed.

The next position that Schafer held was in the office of admissions where she got to help students one-on-one but it was definitely a “go-go-go” job, she said.

She took a break from WSU and went to work for KU Med’s university relations but soon ended up back home in the position she is leaving now— Director of Advertising in Strategic Communications.

When she came back her co-workers said “welcome home” and it really felt like it for Schafer.

“It was a very difficult decision [to leave],” Schafer said.

Schafer said she decided to retire after she realized it was time for a change.

“Wichita State will always be very special to me,” Schafer said.