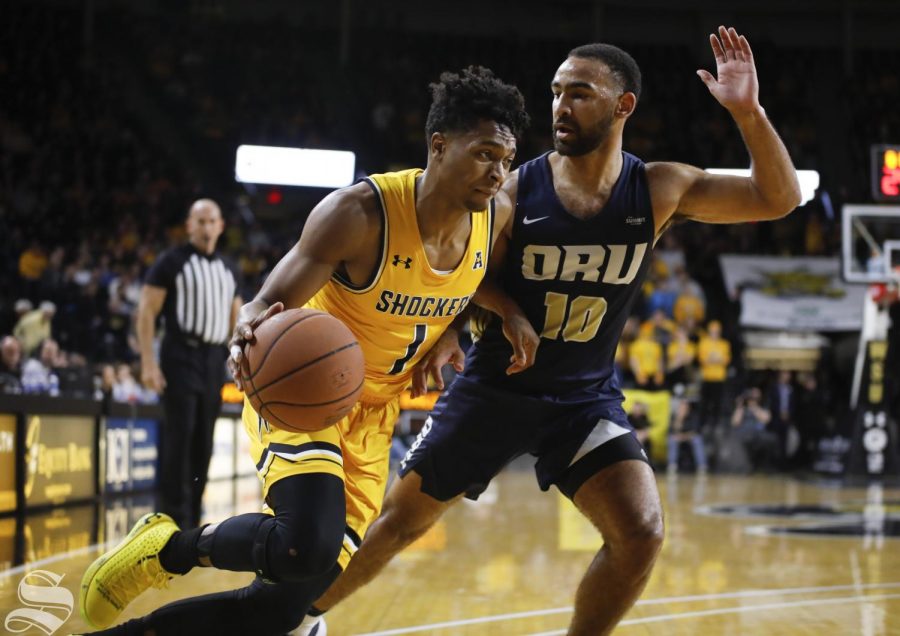 The Wichita State men’s basketball program is set to begin its season on Wednesday evening at Charles Koch Arena against the Oral Roberts.

“With us going to South Dakota and missing three games, everything has been pushed back totally,” Brown said.

The Shockers were supposed to participate in three games last week in the Bad Boy Mowers Crossover Classic in Sioux Falls, S.D., but had to back out of the tournament due to positive COVID-19 tests amongst the program.

Due to the positive COVID-19 tests, the Shockers will have only eight players active for Wednesday night’s affair against Oral Roberts. Brown didn’t go into detail about which players will suit up for the contest.

Wichita State Interim Head Coach Isaac Brown addressed the media on Tuesday to discuss the progress his team has made and preparations for Oral Roberts.

“It’s hard to do five on five, because you only have eight guys available,” Brown said. “So we’ve been doing a lot of four-on-four drills, a lot of shooting drills, trying to run Oral Roberts’ stuff with just four guys.”

The Golden Eagles enter the matchup with the Shockers with a 1-1 record to start off the 2020-21 season. Oral Roberts lost its first game of the season to Missouri 91-64 and won their second game 93-63 against Rogers State in their home opener.

The Eagles and Shockers last played against each other a season ago. The Shockers defeated the Eagles at Charles Koch Arena 68-59 on Nov. 23, 2019. In that matchup, senior Trey Wade tallied a game-high 14 points while going 6-9 from the field.

ORU returns two starters from last year’s team —Max Abmas and Kevin Obanor—who have both gotten off to hot starts this season. The duo has combined to average 35 points through the team’s first two games, while Obanor is currently averaging a double-double.

Brown said that limited the Eagle’s three-point shooting and limited Obanor’s success are keys for WSU to win on Wednesday night.

“Number one, we have to defend the 3-point line, because like I said, they can shoot it one through five and make threes,” he said. “We’ve also got to do a good job getting back in transition, and we’ve got to do a good job of guarding (Obanor) in the low post because he’s a guy that’s averaging a double-double.”

Given the limited numbers available for the game, the program is preparing for a short bench and limited depth. Brown said that his team has to play smart on Wednesday night.

“We definitely will have a short bench,” Brown said. “We’ve got to scout them out and we’ve just got to play smart. We can’t get in foul trouble, because we only have eight guys available.”

Even with positive COVID-19 tests taking away the team’s first three games in South Dakota, the team morale is high, Brown said.

“The eight guys that we have, they’re supporting those guys not around,” Brown said. “They’re coming to practice with a lot of energy, having a lot of fun and they’re picking their teammates up.”

Wednesday night’s matchup between the Shockers and Golden Eagles is still set to go on as scheduled. However, there is always a possibility of a positive COVID-19 test changing the status of the game.

“I think something could always come up,” Brown said. “If the physician said tomorrow we couldn’t play, that’s something that we have no control over.”

The Shockers and Golden Eagles will tip-off at Charles Koch Arena at 6 p.m. The game will be aired live on ESPN+.