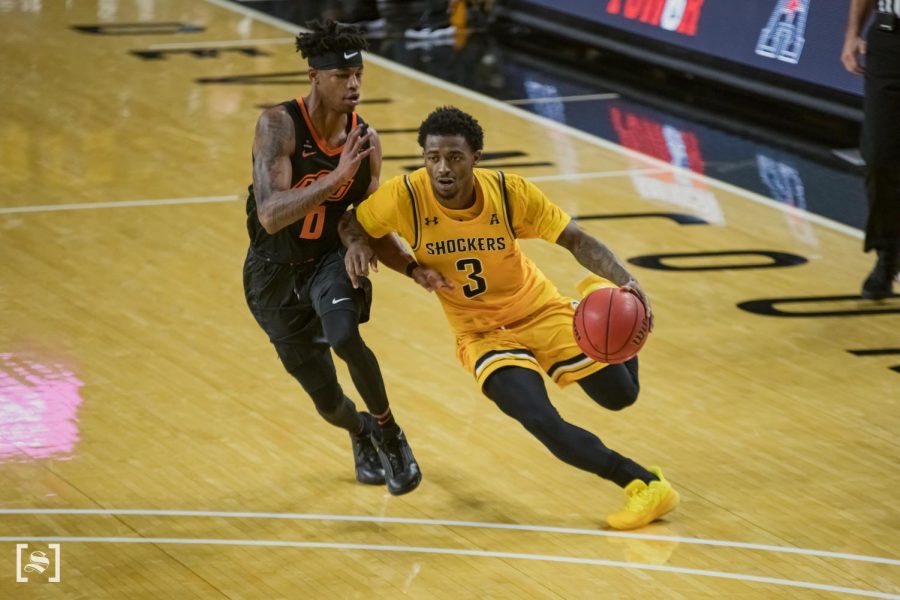 Redshirt senior Alterique Gilbert drives to the basket in WSU's game against Oklahoma State on Dec. 12 inside Charles Koch Arena.

A former five-star recruit and McDonald’s All-American Cade Cunningham sank the Shockers with his three-point shot over the hand of Dexter Dennis with 9.8 seconds remaining in the contest. The Oklahoma State guard finished with 10 points for the contest.

Even with their second loss of the season, there were many bright spots for the Shockers on Saturday. Here are three takeaways from Saturday’s loss to the Cowboys.

After only having nine scholarship players available through the first two games, WSU had a full roster against OSU. Redshirt freshman forward Josaphat Bilau made his Shocker debut in the loss and was effective on the glass, tallying five rebounds in six minutes played. Three of his five rebounds came as offensive rebounds.

Interim Head Coach Isaac Brown said he was pleased with Bilau’s debut and his performance off the bench for the Shockers.

“I thought Josaphat came off the bench and gave us good minutes,” Brown said.

Bilau redshirted last year due to injury. The France native was also able to provide two on 1-3 shooting on Saturday. Bilau collected one steal and the Shockers were plus-one with him on the court.

Junior Craig Porter, Jr. also made his Shocker debut on Saturday and was able to tally two rebounds and two assists in five minutes. Porter comes to WSU after playing two seasons at the junior college level. At Vincennes University, Porter helped lead the program to an NJCAA national championship in 2019.

Freshmen Jaden Seymour and Chaunce Jenkins were available for the Shockers on Saturday but neither received any playing time. Although these players were available in practice this week, they were limited due to COVID-19 protocols.

Backcourt play continues to be a strong point for Wichita State

Sophomore guard Tyson Etienne was the leading scorer for the Shockers on Saturday, finishing with 19 points. Etienne made six of 13 shots from the floor and went 3-8 on three-pointers against Oklahoma State. For the season, Etienne is averaging a team-high 19.7 points per game through the first three games.

Redshirt senior guard and University of Connecticut transfer Alterique Gilbert scored 14 points in the loss. Gilbert made four shots out of eight attempts from the field and also included four rebounds. Gilbert is averaging 15 points per game this season.

Brown said that the backcourt of Gilbert and Etienne has been impressive, especially late in games.

“Those guys have been really good and we put a lot on them,” Brown said. “We want Alterique to create for others, creating on his own. We want Tyson doing the same thing.”

Etienne said that he believes this team will be able to turn it around.

“College basketball is gonna know about us,” Etienne said.  “We’re just putting it together. It’s December. It’s a long season. We were great last year in December and then we took a slide, so you know, this year, I believe is gonna go the other way.”

Shocker Fans are back in Charles Koch Arena

This past week, Sedgwick County allowed Charles Koch Arena to seat 5% capacity for Saturday’s game. 525 fans were in attendance.

Isaac Brown said that he appreciated the fan support in Saturday’s loss.

Next up, the Shockers will begin conference play as they travel to Tulsa on Tuesday. Tip-off is slated for 2 p.m. and can be watched on ESPNU.