OPINION: Universities must defend the right to protest and speak freely 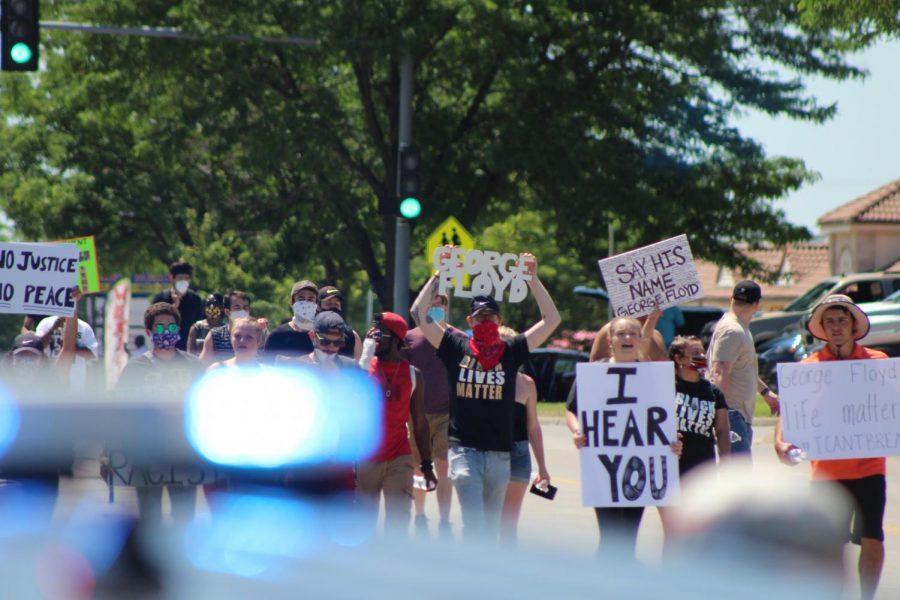 Whether you believe it’s our right to stage protests, engage in unrest, or that people need to give it a rest, Universities must defend the rights of students to assemble and speak freely, both on campus and off.

Fear of disruption, fear of bad press, fear of controversy — these fears drive too many administrative decisions for colleges, universities, and grade schools across the country. Wichita State University and other public colleges in the state of Kansas have a duty as public institutions committed to educating the next generation of great leaders to uphold the tenets of the 1st Amendment.

“Congress shall make no law respecting an establishment of religion, or prohibiting the free exercise thereof; or abridging the freedom of speech, or of the press; or the right of people peaceably to assemble, and to petition the Government for a redress of grievances,” the 1st Amendment states.

We have seen great unrest in the last year — marches, protests and riots have unfolded across the country. The January 6 storming of the U.S. Capitol was a dark day in our nation’s recent history. Should events continue to grow, which raise concerns over safety and security, my concern is that institutions like WSU, local school boards, and the Kansas Board of Regents, will begin to make subtle or overt changes to policies that are meant to guarantee our 1st Amendment rights.

WSU received ample attention in 2019 when the annual report on free speech at U.S. colleges by the Foundation for Individual Rights in Education (FIRE) gave WSU a “red light” rating, indicating the university had “at least one policy that both clearly and substantially restricts freedom of speech.”

In January of 2021, however, WSU updated its policy with “A Resolution Concerning Free Speech, Free Expression, and Academic Inquiry at Wichita State University”.

The resolution states: “Wichita State University will not shy away from exploring uncomfortable topics or discussions on campus but will instead foster an environment where difficult discussions can take place to challenge the University community, to help them grow intellectually, and to allow everyone to fully and responsibly practice and promote freedom of expression and inquiry.”

This is an excellent step in the right direction, and I applaud these changes. But it does not entirely erase my concerns.

In times of great struggle and change, huge decisions get ushered through committees quickly in the effort to maintain decorum. We see this happening in every county, in every state, in just about every country in the world during the COVID-19 pandemic.

Therefore I encourage decision-makers and students to remain vigilant. The answer to our many problems does not lie in restricting individual freedoms but in learning how to engage in difficult conversation, compromise, and defend each other’s rights and liberties. That’s a tall order, and it’s going to be hard.

We should remember that the great Martin Luther King Jr. was arrested 29 times for engaging in the struggle for racial equality. Some of the reasons for his arrests were his participation in the 1956 Montgomery Bus Boycott, disobeying a police order, participating in a sit-in at a restaurant while waiting to be served, and holding a prayer vigil, among others.

Many of Martin Luther King’s most powerful speeches and biggest victories happened on college campuses. Without these places serving as a sanctuary for the disenfranchised, we would never have heard some of King’s greatest quotes.

That’s why we must not forget the greater purpose of academia in this coming year, no matter what happens politically or socially. That purpose is not to amuse or please donors. It’s not to avoid any controversy or all bad press. It’s to educate in a manner that applies to today’s world, not just through theory but through practice.

Demonstration across the nation

I have a friend in Washington D.C. named Lee Ann Hopkins. She’s an attorney and an activist I’ve known for 25 years. She’s originally from Johnson County, KS.

Lee Ann launched a business a couple of years ago called Do Good Soaps and Suds. She said she couldn’t handle seeing turtles with straws up their noses or animals wrapped in plastic and dying from our obsession with plastics. So first, she started her green business, making her bar soaps — plastic packaging free.

She then got involved with something called Fire Drill Fridays.

Inspired by Greta Thunberg and the youth climate strikes and Reverend Barber’s Moral Mondays and Randall Robinson’s often daily anti-apartheid protests, actor and activist Jane Fonda moved to Washington, D.C. to be closer to the epicenter of the fight for our climate. Every Friday last year, she led weekly demonstrations on Capitol Hill to demand action by our political leaders be taken to address our climate emergency.

“I thought, well, let’s go see what Jane Fonda is up to. Let’s see what their little rallies are like,” Hopkins said. “So I went. And then I went again. And then every single Friday, I was there.”

Hopkins says it didn’t take long for her to jump right in and risk arrest every single time they demonstrated. She was arrested three times last year for the citation of “crowding obstructing or incommoding.”

“Here in the D.C. area, you can be arrested three times and not actually have to spend the night in jail,” she said.

What is so unique is that Greenpeace USA and Fire Drill Fridays had a relationship with the United States Capitol Police in such a way that the police knew every single week where the protests were going to be, Hopkins said.

“They knew where we were going to be, and there were always plenty — plenty of police and plenty of transport available and very close on hand.”

Hopkin said that a good protest is highly organized. And when people take a stand that lands them in jail, it’s best if that’s done intentionally. It’s one thing to say, ‘we’re not backing down and are willing to go to jail in protest of these issues. We know what laws that we’re violating, and nobody is getting hurt.’ It’s another to say, ‘we don’t like you or agree with this law or policy, so screw you — we’re here to hurt or kill you.’

That’s what we witnessed on January 6. That’s nothing like that which I defend. I am supporting our right to protest, stand for action, speak up and speak out, and stage demonstrations even if they land us in jail for a few hours.

Hopkins said she noticed a distinct difference in the police during the January 6 rally in D.C. and the many protests she’s participated in over the past five years. The cops were not wearing zip ties on their belts, she says, which they use to restrain people during an arrest, and there were no transport vehicles to be seen anywhere until after the U.S. Capitol had been breached.

“That goes to the deeper problem, which is quite clearly, racism — because that’s what it’s really about —  white folks feel those rules don’t apply to me because I’m a good white person. The rest of you, yes, but not me,” she says.

Hopkins said there is a striking difference between the Black Lives Matter protests she was part of in D.C. and what happened on January 6. At the BLM protests, people were handing out masks and hand sanitizer, food, and water. There were trained medical personnel there. The organizers did everything in their power to de-escalate conflict, Hopkins says.

Nobody minded a police presence, but Hopkins says it does feel like it created “this immediate sense of conflict.” When they showed up without their riot gear, it was fine, but as soon as they showed up with riot gear and shields, “the temperature rose.”

Hopkins said we need to compare that with what we saw on January 6.

It gets to the heart of why millions of Americans protested this summer. It shows us that there’s a lot of work to do in the effort to reach equality and justice for all.

Many believe the recent Black Lives Matter protests may be the largest movement in United States history. Some would rather not face the fact that we, as a nation have a long and violent history of violating, suppressing, and discriminating against Black people.

We also have a long and checkered past with the 1st Amendment. If you take some time to go back and read Supreme Court cases on the subject, you will be shocked and amazed at the many ways our collective freedoms have been violated over the years. But the issue is not put to rest — our freedoms and civil liberties are not guaranteed. We must fight for them.

There are countless cases from students and teachers against their educational institutions waiting to be heard right now regarding 1st Amendment violations. The goal post is ever moving. But if we’ve learned one thing, it’s that the 1960s aren’t as long ago and far-removed as many would like to think. If we do our job as a place of higher learning, our students will learn not just about history and civic issues, politics, and theory; they will learn how to elicit and enact change for the common good. What better place to do so than at a university?

It’s too easy to argue that a decision to impose upon free speech or ban protests is made for the good of the youth or to maintain discipline and decorum at schools. I would rather air on the side of disruption than allow for the suppression of freedom of speech or freedom of assembly at any age and in any location.

Let’s make sure that WSU stays on course and doesn’t revert back to the 1960s, even if that’s where individual members of the community prefer to live.