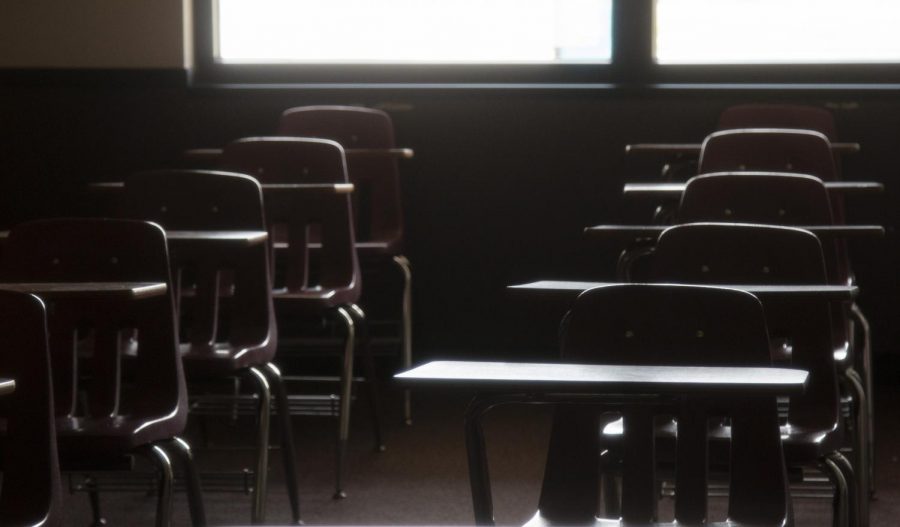 Empty desks in an Elliott Hall classroom on Monday, March 23, 2020.

The Kansas Board of Regents passed a temporary policy that would allow the university president to fire any staff or faculty— including tenured— for budgetary purposes through Dec. 2022, despite concerns shared by Faculty Senate President Aleks Sternfeld-Dunn during the meeting Wednesday.

Despite many regents sharing that they wanted to respect faculty’s worries, the policy passed with nine in favor.

Sternfeld-Dunn said he was discouraged that his concerns were not taken into account.

“These are not just my concerns, when I stand and represent in front of the board I represent all the faculty senates from all the universities,” he said. “I was disappointed that those key points were dismissed.”

Sternfeld-Dunn said the policy could serve as an attack on faculty’s freedoms.

“Tenured provides protection from faculty and their academic freedom to research and teach, and at times when necessary speak in opposition to public thought,” he said.

The emergency policy could lead to faculty being limited to what they do in and out of the classroom, Sternfeld-Dunn said.

“Any policy that revokes tenured faculty puts faculty in a position where they can be terminated just for having opposing viewpoints, they could be fired for being outspoken against a policy or a procedure, they could be fired because their research is considered controversial at the moment,” Sternfeld-Dunn said.

Sternfeld-Dunn’s main worry regarding the policy is not what it means for WSU, but for other universities.

“I actually worry for other institutions that have not done this kind of financial management that WSU has done and what that means for their faculty and staff.”

While Sternfeld-Dunn has been mainly focusing on what the policy might mean for faculty, he said it is important to note that the policy pertains to staff as well.

“That is getting lost a little bit in this … it’s about staff too, it’s about people, people who have jobs,” he said. “I worry about my colleagues and the faculty and staff at other universities that might use this tool.”