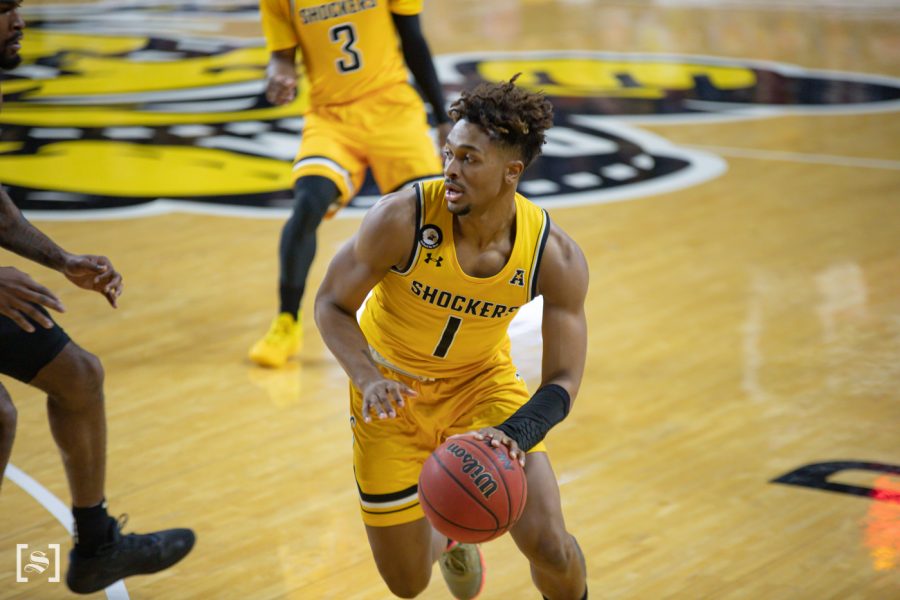 Wichita State sophomore Tyson Etienne drives to the basket during the game against UCF at Charles Koch Arena on Jan. 30.

Wichita State men’s basketball won in nail-biting fashion on Saturday afternoon, defeating the UCF Knights 93 to 88 in overtime. With the victory, the Shockers are 9-4 overall and their record in American Athletic Conference play moves to 5-2.

Sophomore Tyson Etienne matched his career-high in points in the victory, scoring 29 points. Etienne went 9-15 from the floor and 5-10 from three-point distance in the win. Etienne also shot six-for-eight from the free-throw line.

“Early on in the first half he missed a couple of wide-open shots, so I didn’t call a lot of plays for him,” Brown said. “I just let it come to him, but he didn’t force anything. Once he got it going, we just tried to ride him. We just started calling plays for him, getting him the ball, and he started making shots. Once he got to the free throw line and saw the ball go through the net it just gave him a lot of confidence and he’s hard to guard late in the game.”

After a lackluster performance at Memphis, which saw Etienne score a season-low three points, he said that the team had to bounce back and get in the win column, especially playing in a home conference game.

“It just shows that we can win with our backs against the wall,” Etienne said. “You’ve got to win at home in conference, for us to rally back and win on our own floor, especially coming off the game that we just had and games that we haven’t had.”

Etienne is off to a hot start to his sophomore campaign, leading the Shockers in multiple statistical categories. The sophomore guard is averaging 17.6 points per game, which is tied for the American Athletic Conference lead with Houston guard Quentin Grimes.

Etienne’s five triples on Saturday afternoon led him to become the fastest Shocker to 100 triples in Shocker history, reaching the milestone in 44 games. Etienne’s 100th three-point basket in a Shocker uniform came in good timing in overtime as the go-ahead basket to defeat the UCF Knights. Brooklyn Nets guard Landry Shamet was the previous Shocker to reach this milestone the fastest at 50 games.

Etienne acknowledged how special it is to have his name amongst the Shocker greats, such as Landry Shamet, Ron Baker and Fred VanVleet.

“It’s good company,” Etienne said. “To be in a conversation with those guys and a statistic like that is a blessing. I’m thankful to be that and I’m thankful that I’ve played with guys that are able to give me the ball. It’s just a testament to working hard and just listening. It’s a blessing but I don’t really play basketball for accolades.”

After the mass amount of transfers this past offseason, Etienne was the top-returning scorer for this season. The New Jersey native averaged 9.4 points per game with 36 steals, 62 triples on 38.8 percent shooting from three-point distance. Etienne posted one of the best freshman campaigns by a Shocker guard in program history.

Etienne has six games of 20-plus points with four of those coming in the month of January. Even with his increased scoring load, Etienne is shooting 38% from three-point distance which is only a .2% decrease from a season ago.

The Shockers will look to continue their winning ways on Wednesday, Feb. 3 against the Tulane Green Wave at Charles Koch Arena. Tip-off is scheduled for 7:00 P.M. The game will be live to watch on ESPN+.