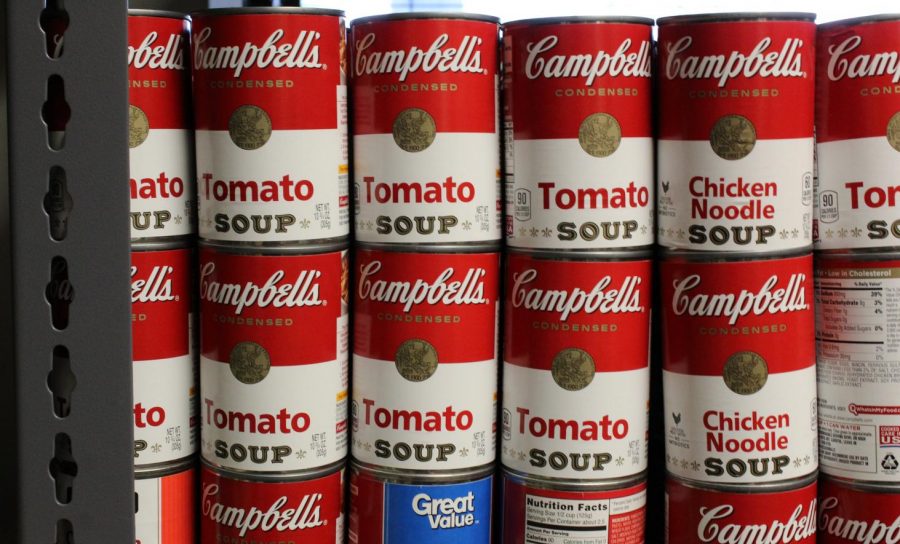 Stacks of soup cans line one of the shelves in the Shocker Support Locker. Besides non-perishable food items, the pantry also offers hygiene products, clothing and textbooks.

After five years of dedication to the well-being of campus, the Shocker Support Locker began its anniversary celebration this month.

Growing from simply a food pantry to a place where people can access food, toiletries, clothing, and even baby products, the Shocker Support Locker has helped combat food insecurity within the Wichita State community. The Locker is open to all WSU students, faculty, and staff.

Gabriel Fonseca, Assistant Director of Student Involvement and Student Government Advisor, has provided his service and general oversight for the Shocker Support Locker for three years.

Fonseca said one of the biggest changes the locker has undergone is changes with how the service is provided.

“When it first started it was on the honor’s system. You would come in, grab what you need, and leave,” Fonseca said. “We recognized that we had to figure out a way to organize it differently, so three years ago we brought on staff to provide more of a connection with the person.”

As the Shocker Support Locker has progressed over the past 5 years, it has had to switch locations multiple times.

“When [the Locker] first was founded, it was in the Heskett Center and then it moved to the student government office,” Fonseca said. “Then 3 years ago it was moved to its current location, which is in Grace Wilkie Hall.”

Fonseca said that support, both financially and through donations, has also evolved since the locker’s inception.

“We’ve been very fortunate to have the support of amazing partners and donors and sponsors who have helped fill the gap,” Fonseca said. “We rely on fundraising; we rely on people donating items. We’ve been grateful for our partnership with places like the Kansas food bank and Dillons to help us fill the needs that we experience during high peaks of the year.”

To kick off the Shocker Support Locker’s anniversary celebration, they launched a fundraising campaign asking people to donate $5 to honor their five years of service.

“The rest of the month, we are going to be highlighting some of our big partners and some of our big community agencies that work with us to show our appreciation to them,” said Fonseca.

To close out the month of celebration, Fonseca says the locker will be publishing data from the last five years to show the growth and need behind what they are doing.

“At the end of the month,” Fonseca said, “we’re going to be putting out a video that will look at the Locker from the eyes of the people who started it.”

With five years of hard work and dedication, Fonseca said the Shocker Support Locker’s impact can be felt around campus.

“To do what you can to help your students, faculty, and staff continue to be academically successful and try and take away that burden— we can see the impact we’re making and that makes it all worth it,” said Fonseca.