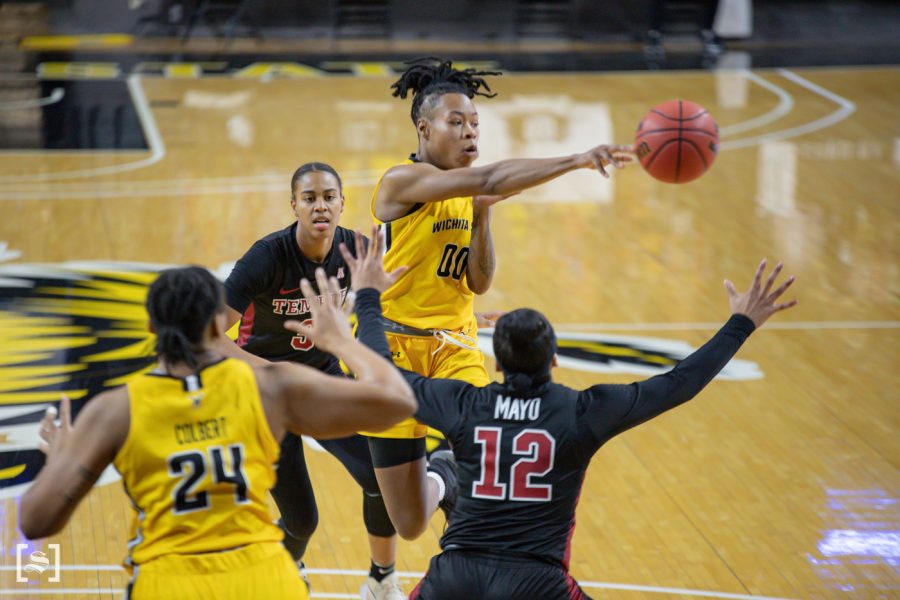 Wichita State junior Asia Strong makes a pass during the game against Temple on Feb. 5 at Koch Area.

The Shocker women’s basketball team lost to the Temple Owls 65-57 on Saturday afternoon. With Temple’s victory over Wichita State, the Owls sweep the season series over the Shockers.

Wichita State falls to 4-8 overall and 1-6 in American Athletic Conference play. With the victory, Temple moves to a 7-7 overall record and 7-4 in conference play.

Mariah McCully scored a season-high 18 points along with three rebounds in the loss. The senior guard shot 7-14 from the floor and 2-3 from three-point range.

McCully scored the team’s first seven points of the contest.

Head Coach Keitha Adams hopes that McCully can continue to handle the scoring load and give the team a better chance to win.

“Hopefully that is a good sign for us,” Adams said. “When she’s really good and in good shape that’s going to improve and help our chances.”

Junior guard Asia Strong recorded a second double-double of the season in the loss. Strong had 12 points and ten rebounds. Seraphine Bastin scored 12 points on 6-12 shooting to go along with seven rebounds.

Temple dominated the first half, leading at the intermission 34-23. Wichita State shot 36% from the floor making nine shots out of 25 attempts.

Wichita State has a tough stretch of basketball coming up against UCF and Memphis this upcoming week. Both teams are near the top of the American Athletic Conference standings.

The Shockers are scheduled to play against UCF in the next game at Charles Koch Arena on Wednesday Feb. 10 at 6 p.m. The game will be broadcast live on ESPN+. The previously scheduled matchup between the Shockers and the Knights on Jan. 30 was postponed due to COVID-19.