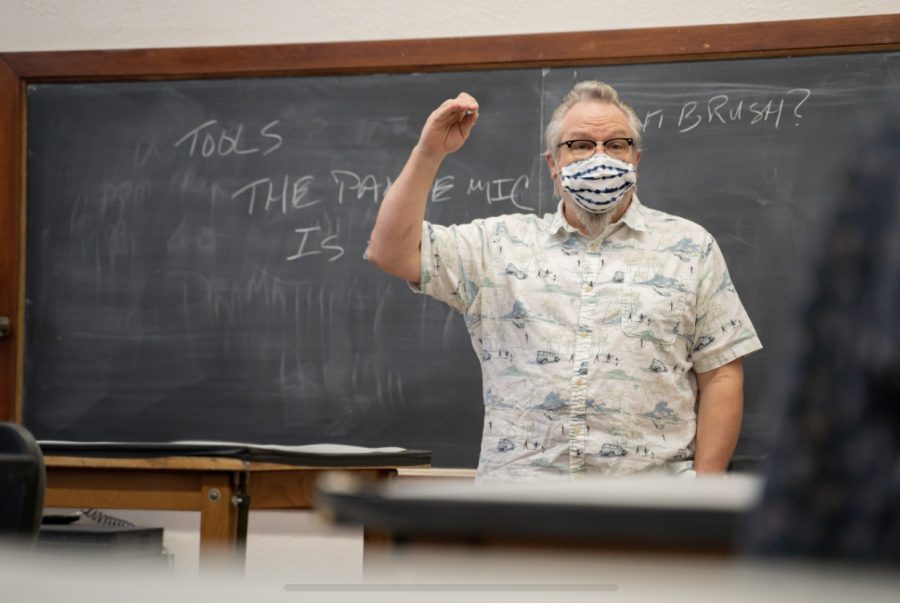 Change is inevitable. It always has been and will be. Most people resist change, but some embrace it.

Ed Baker, Wichita State University’s Associate Professor and Technical Director of School of Performing Arts, understands that things in the world happen, most of the time without our control. It is how we react and the following actions we take afterwards.

Baker started his career in the acting business and made a living for himself in New York. But after being in the industry for a while, he decided to come back home to family.

“It was a high stress industry and it required more spoons than I owned,” Baker explained. His next passion is carpentry, which he pursued a job in and became high up in the chain within the first month.

He soon realized that while working with wood was intriguing, he wanted something else. It didn’t strike him until he was talking to his mentor, Dick Welsbacher that being a teacher is right up his alley.

“Why didn’t anyone ever tell me I could be a teacher? ‘Cause this is what I’m meant to do.” Baker found this position at WSU and said he enjoys every minute of it.

Both are growing and expanding, but are stuck in the past.

“They have lots of different moving parts, and they are not easy to change. . . . Yes, there are always changes, but they are usually very small.” In these industries people are expected to focus on work 100%, instead of their own lives.

Newer generations are understanding life isn’t just working their lives away, but about doing things that make them happy. Baker acknowledges and wants to teach more people that life shouldn’t be wasted, but fully experienced.

2020 brought many changes as everyone knows. However, it did teach people that “we had to face that change.”

Baker is very adamant about being respectful to his students, co-workers, and everyone in general. He said he believes words can be used as a weapon, but can also be a blessing.

On the first day of Baker’s Stagecraft class, he told his students that he wanted to call them by the name they go by, not their legal name. He said that this lets students know that his space is a safe and respected one.

It’s important to change with the times, Baker said. If people don’t, society stays stuck in past ways that end up hurting more people than doing any good.

“I can only speak freely if I’m willing to listen closely,” Baker said, speaking on the fact that some people might not deal with change as nicely as him.

“I do try to use neutral references for everybody,” Baker said. He wants people to know that he’s learning and growing, and that he respects them fully.

Baker also uses his platform in the classroom to preach about consent.

“I believe that every human has a story, every story has a place where it belongs, and my entire job is to help people find the place where their story belongs,” Baker said. “I just help people tell their stories.”