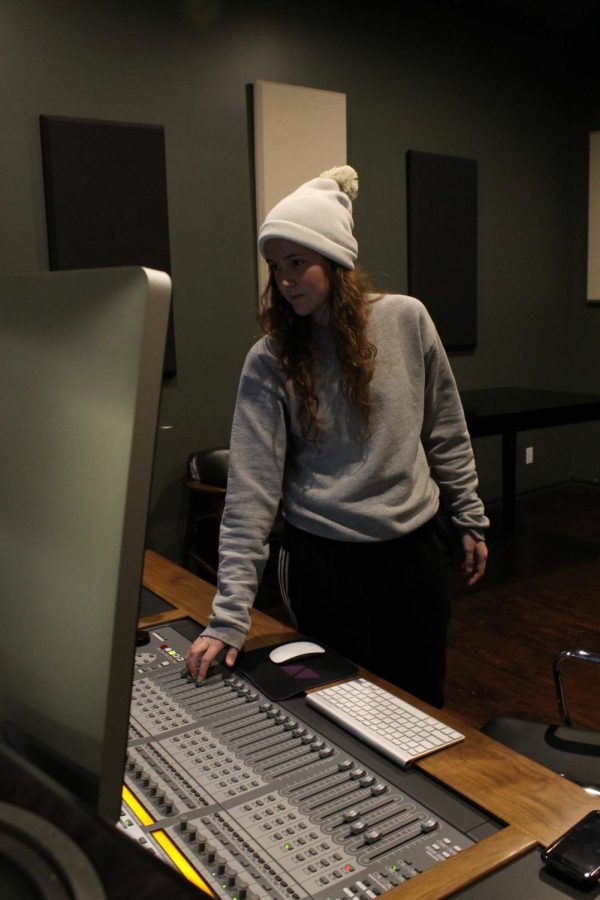 Courtesy of Ciara Duarte. Ciara Duarte adjusts levels on the board for one of her productions.

Ciara Duarte is a senior majoring in media arts with a concentration in filmmaking. Her passion didn’t start until her last semester at Butler Community College when a teacher mentioned WSU’s new media program.

When she joined, she didn’t exactly know where she was going, but she found something that she enjoys. Now that she is in her final semester of college, she has figured out what her passion is.

“I love pre-production. I know the end goal of what I want to do . . . I love organizing and getting everything ready before shoots happen,” Duarte said.

This is Duarte’s last semester in college, then she will take steps to make film her full-time career.

“I think my goal is to stay in Wichita for a little bit . . get a little bit more experience,” she said. “Then go to Kansas City, get experience there.”

Duarte said that one of the reasons she believes she will be successful in the career is because of her ability to take risks.

“I know with filmmaking, with any kind of creative degree, you kinda just have to make a big leap,” she said.

Duarte said she is open to failing, and will use those failures to shape her.

“You just have to fail,” she said. “Because when you fail, it’s a big learning opportunity. I want to stick to my safety net, but there’s also a part of me that just wants to make a big leap to a big city and just fail and learn and just get better.”

COVID-19 impacts the media and film industry drastically. Some of the largest movie companies shut production down when the pandemic started. Now with a little bit more knowledge and planning, film shoots are starting to begin.

Duarte herself has had to postpone a shoot because a crew member was still getting over COVID.

“Not everything is going to be perfect, and I think that’s something huge that people need to know,” she said. “Even if the pandemic wasn’t going on, there are still going to be things that don’t go as planned.”

Going forward, Duarte wants her cast and crew to know that she is taking care of their health.

Change is inevitable, and Duarte is going with it.

“I think the biggest reason for staying motivated on this project is knowing that it is my senior project,” she said. “I want to make it something I want to remember. And it’s something that my crew mates want to remember too . . . We can finally make something and be creative.”

Duarte is in the process of production on a short film she wrote called “Dead Harvest”.

“I’m a huge Zombie lover,” she said. “It’s kind of ironic that I’m making this during the pandemic and it sort of relates.”

She described it as being similar to “Black Summer”, but has more of a “Walking Dead” approach. She is utilizing lack of sound in her short to make it seem more suspenseful like “Black Summer” does.

During an apocalypse, two women, one which is pregnant, are trying to go further East where it is supposedly safer and out of zombie territory. “

Some interesting things happen. I won’t say what, you’ll have to watch the film,” Duarte hints at.

It was originally an hour length film, but she took about 50 pages out and made a short.

“I had help from my professors and some students,” she said. “We did maybe 10 rewrites.”

For art students who are struggling during this time, Duarte says that the best piece of advice she has is to “start as early as you can” on your projects.

Overall, Duarte said she is making the most of the situation.

“It’s been fun,” she said. “This semester, I’ve really enjoyed the process of it. It’s a lot and covid really sucks but it’s definitely a learning experience. I think a lot of people can learn during this time on how to get creative.”