Baseball wins its first series of the year 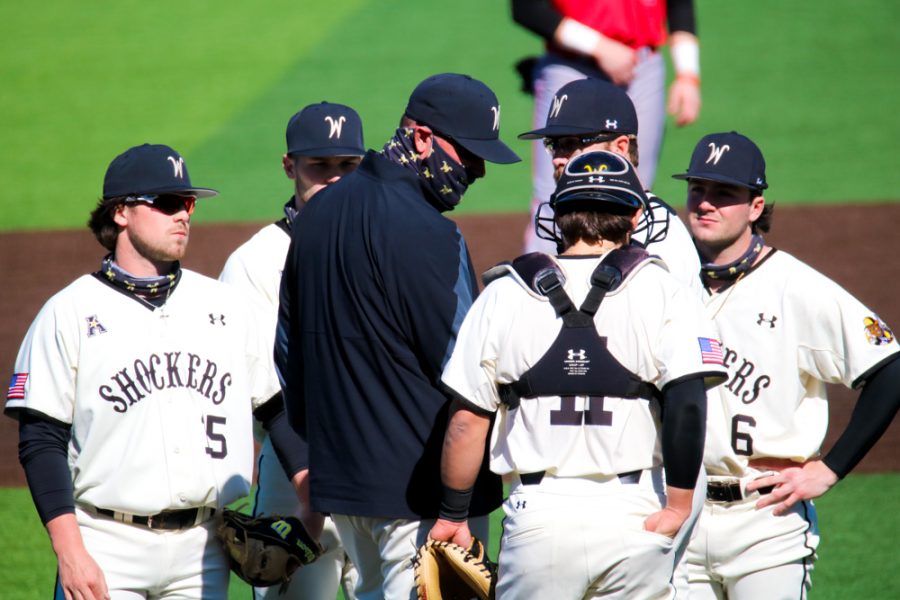 Wichita State picked up its first series win of the season, this weekend, winning two out of the three games against Southern Illinois-Edwardsville.

The Shockers defeated the Cougars 10-4 in game one of the series on Friday. Junior Paxton Wallace led the way in a historic performance, where he became the first Shocker to drive in seven runs since Johnny Coy in 2012. Sophomore David VanVooren also had a career day at the plate, collecting a career-high three hits in four plate appearances.

WSU dropped its lone game of the season on Saturday, falling to SIUE by a score of 9-7. The Cougars used a late ninth-inning rally to take a two-run lead but WSU was unable to counter with a response of their own. Garrett Kocis led the team offensively in the loss, collecting two home runs and three RBIs.

In the rubber match of the season, the Shockers picked up the series victory by a score of 7-5. Three different Shockers tallied two RBIs in the victory, with Wallace, Kocis and VanVooren all reaching that benchmark. Tommy Barnhouse inherited two runners in the ninth innings but he was able to pick up the final two outs to secure the victory.

Head Coach Eric Wedge said that after the disappointing loss on Saturday he was pleased with the response on Sunday.

The Shockers’ pitching staff struggled throughout the weekend, allowing 15 earned runs across the three games, which was good enough for a 5.00 ERA in the series. Early on in the season, the starting pitching hasn’t gotten too deep into the games, which has made WSU rely more on its bullpen.

Liam Eddy had the longest start of the series, in which he went six innings while also allowing four runs. Spencer Hynes also had a solid start, as he went five innings while only allowing two earned runs.

Wallace said setting the tone with the bats was a focus following Saturday’s loss.

Last season, Wallace was out due to a back injury and was unable to suit up in the abbreviated season. This weekend, Wallace went 8-13 (.615 batting average) at the plate while also driving in 11 runs.

Wallace said that he’s feeling the best he has in his career after recovering from his injury.

“Being out for so long, now I’m feeling what it’s like to be back on the field with the guys, competing as a team, it doesn’t get any better.”

The Shockers will be back in action Tuesday as they travel to Tulsa, Oklahoma to take on Oral Roberts. First pitch is scheduled for 3 p.m. at L.J. Johnson Stadium.