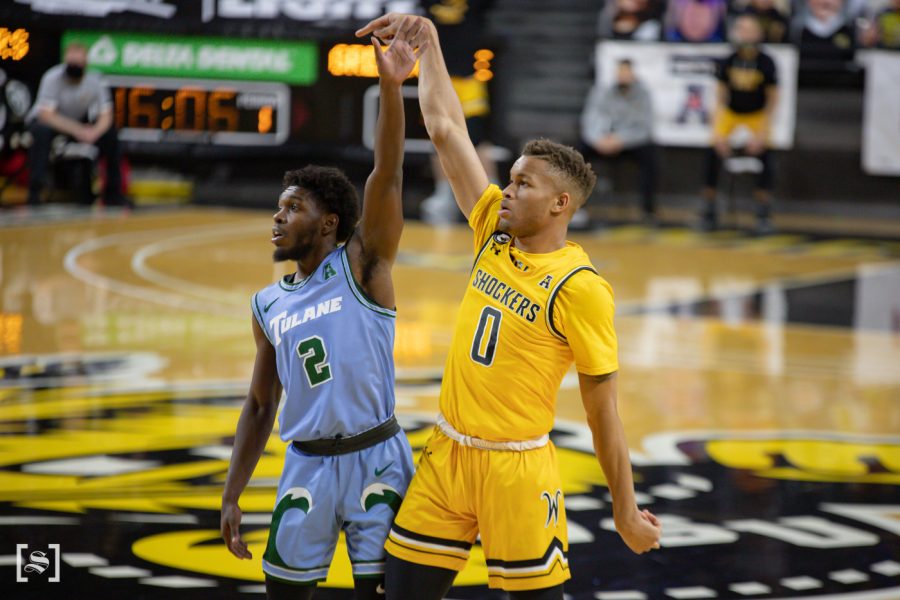 Wichita State junior Dexter Dennis shoot a 3-pointer during the game against Tulane at Charles Koch Arena on Feb. 3.

After 13 days of waiting between games, Wichita State returned to action Thursday, and defeated Tulane by a score of 78-70. The win extended the Shockers’ winning streak to five games.

Despite the long layoff, the Shockers’ offense came out firing in the first half and went into halftime with a 46-33 lead. The 43 points scored by WSU were the most in a half since the first half against Newman on Dec. 30.

The second half was a different story, however, as the Green Wave battled to cut the deficit to five points with 14 minutes left in the game. The Shockers were able to hang on, but were outscored 37-32 in the second half.

“These teams in this conference will keep battling,” Head Coach Isaac Brown said. “We played Houston, they jumped out and all of a sudden it’s 14 and we battled back. This is a tough basketball league, any time you come on the road and play, the other team is going to fight. I felt they made some tough shots and they battled back in the game. I’m just so excited about the leadership on this team and those guys continue to fight and win the game.”

Brown said that getting contributions from up and down the roster was a key to tonight’s victory.

“A lot of games we play, people key on Tyson,” Brown said. “Tyson was a little off tonight, not making shots that he normally makes. All five starters played great tonight. I thought those guys were able to execute even though they were in different positions.”

Senior Trey Wade was crucial in the victory, scoring a career-high 23 points. Wade was off to a sluggish start in his senior season but looks to have turned it around of late. On Thursday, Wade went 9-12 from the field and 4-5 on three-pointers. Entering Thursday’s game, Wade was shooting 26.5% from deep.

Brown said that Wade’s shooting performance doesn’t come as a surprise because of the work he puts in.

“Even when he wasn’t shooting the ball well, he put in the work after practice, he would stay and shoot 200-300 jumpers,” Brown said. “I’m just so happy for him that he was able to put in the work and go out there and make some shots tonight.”

Junior Dexter Dennis turned in his second double-double of the season with 20 points and 13 rebounds. Dennis’ impact was once again felt on the defensive end, holding Tulane’s leading scorer Jalen Forbes to a season-low five points. Forbes was coming off a 37-point performance against Cincinnati but Dennis had the answer defensively.

“I think he deserves a lot of attention,” Redshirt senior Alterique Gilbert said of Dennis. “He does a lot defensively that goes unnoticed for this group. With his length and his size and his ability to guard just about one through four, really. He’s a great defender, an NBA defender without a doubt.”

Point guard Alterique Gilbert set a career-high in assists on Thursday, collecting 12 in the victory. Those 12 assists were the most by a Shocker in the last 30 years, when Robert George collected 12 assists against Drake.

Gilbert said that with more players stepping up and making shots, it has allowed the offense to thrive.

“I just think guys are making shots now,” Gilbert said. “Dexter had a good night, (Trey)’s shooting the ball well. Now, a lot more guys on the team are starting to come along and it’s just going to be harder for guys to defend us with everyone making shots.”

With the win, the Shockers move one game closer to their first American Athletic Conference since joining the league in 2017. A win on Saturday would clinch the regular season title while also giving WSU the one-seed for the looming AAC Championships next week.

“It’ll be super special,” Dennis said. “We have an opportunity to do something that’s never been done so we know it’s not going to be easy. South Florida’s definitely going to come in with some type of motivation but we’re locked in. We’re trying to get this one for a lot of reasons because of what we’ve gone through this year. It’s going to be a special event for us.”

WSU’s game against USF on Saturday is slated to tip-off at 12 p.m. inside Charles Koch Arena. The game will also be broadcast on ESPN+.