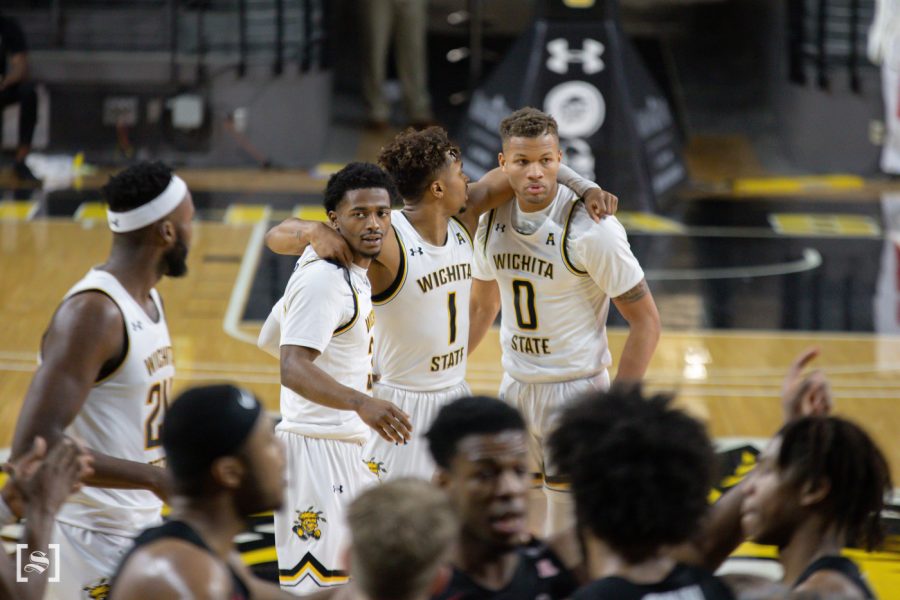 Wichita State players gather together at crunch time during the game against Temple at Charles Koch Arena on Feb. 7.

CBS Sports’ Jerry Palm is a bracketologist — someone who predicts the NCAA Tournament field — that has WSU in the field of 68. Palm projects the Shockers as a 10-seed in his latest bracket.

Palm said that in order for WSU to keep their spot in the field, they need to avoid bad losses in the final week of games.

“Wichita State’s task is simple,” Palm said. “Beat everybody not named Houston. That’s the only team Wichita State can afford to lose to and still have a chance to make the tournament.”

If WSU can pick up a victory on Saturday, the Shockers will clinch their first American Athletic Conference regular season championship since joining the conference in 2017.

Palm said that regular season championships will not impact the committee’s decision making for at-large teams.

Palm said that WSU will be a difficult team for the committee to judge because of how few games they have played this season.

“They’ll be comparing a Wichita State team that played 16 games with teams in this part of the bracket that have more wins than that,” Palm said. “When I talk about their resume being thin, it’s thin the sense of the actual accomplishment but it’s also thin in the sense that they haven’t had much of a chance to show.”

Currently, the metrics aren’t in favor of WSU as their NET (NCAA Evaluation Tool) currently stands at No. 63 in the country. The Shockers are 2-3 in quadrant one games and 2-1 in quadrant two games.

Palm said that those metrics shouldn’t impact WSU’s chances of returning to the tournament.

“The metrics don’t matter and Wichita State people should know that,” he said. “In 2017, Wichita State fans and Gregg Marshall were killing me because I said they had to win the conference tournament to get in even though they were top-ten in KenPom and they a 10-seed in the tournament. If you’re counting on that good luck.”

The general consensus around the Shockers’ tournament chances is that WSU is in the field at the moment. According to BracketMatrix, WSU is a 12-seed in the tournament with the Shockers appearing in 90 of the 107 brackets.

John Gasaway, a college basketball insider for ESPN, said that number for WSU can be a scary one.

“It’s a solid 12 and this is true to a lot of teams, most teams this year,” Gasaway said. “There’s not a lot of disagreement of people trying really hard to get this right, not a lot of disagreement that Wichita State is one of the last teams in the field. There is the danger in other conference tournaments taking at-large bids off the table. It certainly looks a world better and more solid than it did before the Houston win.”

In the Shockers’ first two losses against Missouri and Oklahoma State, they were held to only eight players due to COVID-19 issues. The losses won’t be viewed as “bad losses” by the committee but would’ve been helpful in building their resume.

Gasaway said that WSU’s limited number of players for its first two losses will be something the committee factors in when comparing other at-large teams.

“The thing about the committee is they are people and if you go through the mock selection exercise and to the best of my knowledge, they still do it this way,” Gasaway said. “If you know the team only had eight players for the three games or you know Illinois didn’t have Ayo Dosunmu or VCU doesn’t have their leading scorer then that drives how you rank those four or eight teams. It drives it more than any official policies or procedures than the NCAA might have.”

With the AAC having a down season this year, the tournament provides chances for WSU to suffer a bad loss on their resume.

“The danger with the American, especially with a No. 1 seed is that it can expose you to bad losses. It is bad loss avoidance at the American tournament or conversely winning the tournament is the task at hand and then you don’t sweat this whole at-large discussion at all. You just go.”