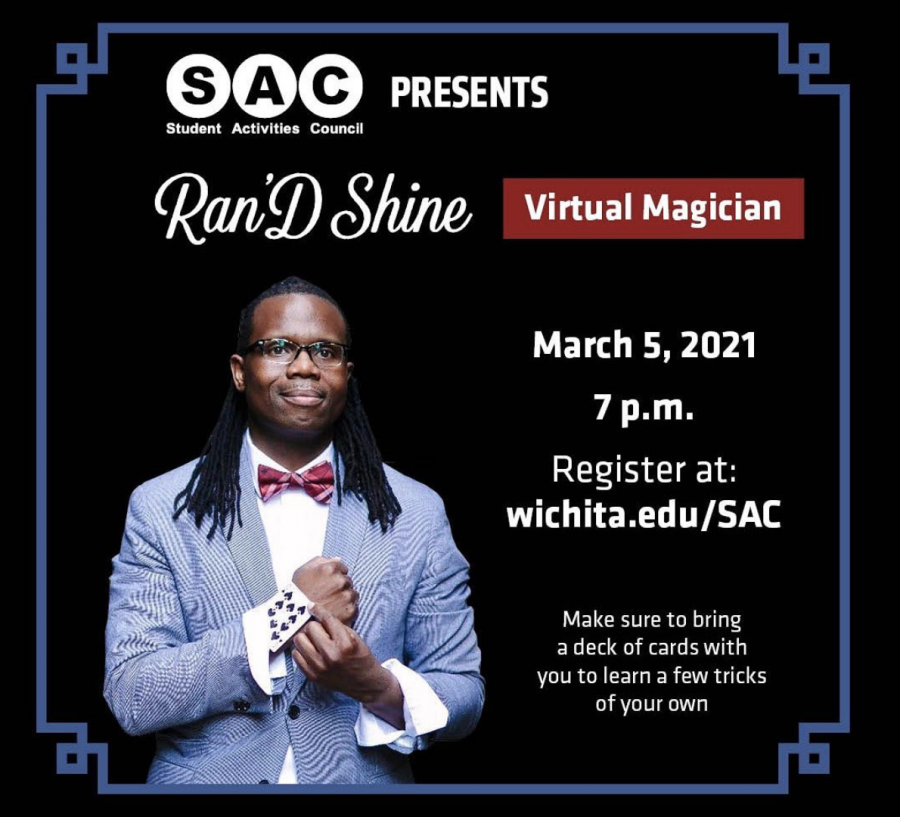 The Student Activities Council hosted a virtual livestream on Friday, March 5, with the host Ran’d Shine, a world-renowned magician who has performed at colleges as well as at the 44th Presidential Inauguration Banquet and Ball.

Shine performed a variety of tricks, and started out the live show by performing some warm up exercises. By expertly moving a thimble from one finger to another on different hands, the audience was quickly drawn into the show to see the rest of his skills.

Shine also demonstrated his hypnotizing skills, by controlling the audience’s fingers to move closer and closer together just with the sound of his voice. Even though the event was not in-person, he was still able to connect with the audience throughout the entire show. Many tricks involved having audience members participate, such as when he asked an audience member to pick his favorite card out of a deck.

Shine also took some time to tell the audience how he got into magic. Shine got interested in magic when he was in college at Penn State University. He was in the graduate program studying health education research, and every Tuesday he and his friends would meet in the Student Union and do card tricks, just for fun in between classes.

After he received his Master’s Degree in health education research, he moved to South Africa and worked doing research. After a year, he came back to the United States and started working for the University of Pennsylvania doing behavioral intervention research on drug inheritance. At the same time, he was also working on his PhD at Drexel University.

“Many people ask me, how did I get started with magic . . . After a year and a half of doing all that I said, ‘I want to do card tricks for a living,’ and I quit my job, left the PhD program, and for the past sixteen years I have been performing card tricks. Twenty-seven different countries, three TV shows and more importantly I paid off all of my student loans doing card tricks,” Shine said.

Shine said he has been living by the same three principles ever since he became a magician; luck, faith, and skill. He represented those principles with three quarters, which he then made disappear and reappear with the snap of his finger.

As a magician, he also took the time to perform tricks that are mathematically impossible, without being able to predict the future. He had the audience pick numbers on a grid and then count them all up, and then impossibly pulled out the same number from an envelope that had been sitting on the table the entire show.

Shine also took some time to talk about the history of magic, and incorporate it into his trick of moving holes on a card around just with his two fingers, with no possible explanation of how he did it.

“In the early, early, early formation of this performance we call magic, magic and science coexisted. It was over the years that they separated, during the dark ages. It’s a real fascinating history . . . This is the science part. Simply by rubbing my fingers together, that creates friction. Friction creates heat. Heat creates energy. Basic science,” Shine said.

He saved one of his most suspenseful tricks for last, and effectively caught the attention of the audience for a grand finale.

Shine then put an unsolved miniature Rubik’s cube in his mouth, and after having the audience count down from five and wriggling it around in his mouth, he pulled it out completely solved. Just like magic.