Shockers advance to quarterfinals with victory over Tulsa 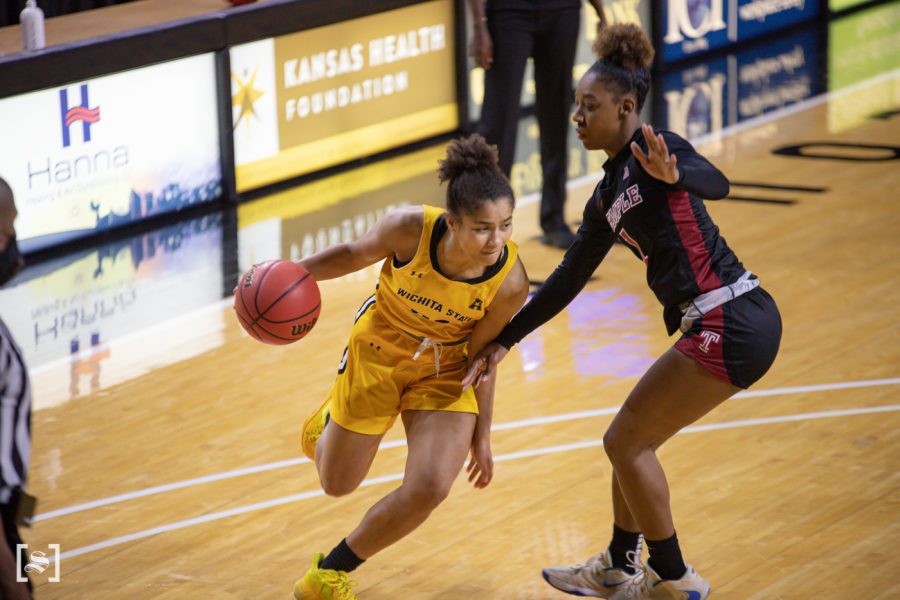 Wichita State junior Seraphine Bastin drives to the basket during the game against Temple on Feb. 5 at Koch Area.

Wichita State Women’s Basketball advanced to the quarterfinals of the American Athletic Conference Championships on Monday with a 76-64 victory over Tulsa.

The first half was even on both sides with no team able to gain a lead greater than three points. At the half, Tulsa led the game by a score of 32-30.

The second half was close once again with both teams trading baskets. With the game tied at 50 with 8:36 left to play, WSU went on a 9-0 run to help finally gain some separation in the game. Asia Strong would nail a three-pointer in the final minutes, which sealed the first-round victory for the Shockers.

Throughout the season, the program dealt with COVID-19 issues which caused postponements and a low amount of players available for practice. Now, the Shockers have a healthy ten players and are reenergized in the conference tournament.

“For our team, we feel like we’re in a situation that we’ve not been in really all year,” Head Coach Keitha Adams. “We’ve had eight players, seven players. For us to have ten players, it feels like a million bucks. We literally have not experienced having ten players healthy this season.”

Adams said for this group to even be at the conference tournament and advance to the quarterfinals shows how resilient they are.

“For us to have ten and for us to be here, showed a lot of resilience and mental toughness throughout this season and we didn’t quit even though we were facing adversity,” Adams said. “So, we’re here and now it’s just go play ball. ”

Some teams around the country that have dealt with similar COVID-19 issues decided to end the season including AAC foe, Southern Methodist.

Adams said even with their struggles they wanted to find a way to get back out on the court.

“I know we had situations this year that we could have shut our season down,” she said. “We had two weeks that we had five players practicing. That’s pretty deflating and it’s hard but the idea of quitting our season, we’ve got players that want to play, players that need to play and the thing is thinking about watching other people play. If you love the game and you want to play, it’s going to really stink that you’re watching other people play and you’re not getting to play.”

Junior Asia Strong was one of two Shockers to collect a double-double in the victory and finished with a career-high 24 points and 12 rebounds. Junior Seraphine Bastin also tallied 11 points and 11 rebounds.

Strong said that even though a loss could end their season, her mentality hasn’t changed entering the conference tournament.

“My mentality never changes,” Strong said. “I just know I’ve got to work hard, there’s always room for improvement, getting better every day, taking it game-by-game, day-by-day just scouting players and working on ourselves as a team.”

In the quarterfinals, the Shockers are set to face off against South Florida, who they lost to in their lone matchup this season. In that game, WSU was held to six scholarship players and one walk-on and could’ve canceled the game based on the amount of players they had available. But Adams and the Shockers traveled to Tampa and battled with the Bulls before USF ultimately came out on top.

Adams said that with the team now fully healthy it gives them some confidence heading into the second matchup.

“We had seven and we went and played them,” Adams said. “We had a very competitive three quarters and then they hit three threes in a row and kind of got away from us. With seven of us, we competed hard. We’ve got a lot for their team and their program but it feels great knowing we’re going to be playing with ten players tomorrow.”