Shockers hold on for one-point quarterfinals victory over South Florida 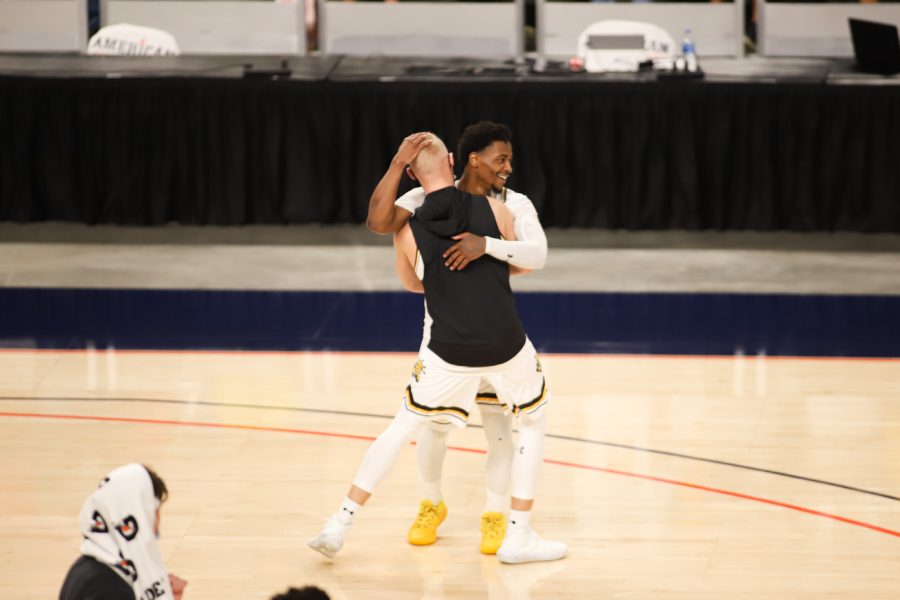 Wichita State redshirt senior Alterique Gilbert celebrates with Brycen Bush after their win against USF at Dickies Arena on Mar. 12.

The Shockers will now advance to the semifinals of the American Athletic Conference Tournament after a close one-point victory over South Florida on Friday. Wichita State won the game by a score of 67-66.

WSU trailed by as many as 12 points with 12:26 left in the game but cut into the deficit down the stretch. Sophomore Clarence Jackson drilled a pair of threes and junior Craig Porter Jr. collected a steal and a layup which cut the deficit to four points with over eight minutes left to play.

The Bulls pushed their lead up by seven points with 6:00 left to play, but the Shockers utilized a 10-2 run to seal the victory. In the final 5:08 WSU missed all of its shot attempts but connected on its free-throw attempts to complete the comeback.

“You can blow teams out early in the season and then when you get to a close game, you don’t know how to close it out,” Brown said. “The fact that we’ve played 10-12 games that were under five and two minutes to go, I think that experience helps us. Our guards are really good at taking over the game late and we’ve got guys stepping up and making free throws when we need them.”

In the final minute, WSU regained its lead as Tyson Etienne connected on a pair from the free-throw line to take a one-point advantage.

Etienne said he took it upon himself to score when his teams needed him the most, just as he’s done all season.

“I just had to make a play, I had to get something at the rim,” Etienne said. “If they slid over again, I’d get a dump down but I just felt I needed to make a play and get us a bucket.”

Morris Udeze drew a charge with 4.1 seconds remaining, which proved to be the play that sealed the victory. The Bulls had one more chance to win the game after Tyson Etienne missed the front end of a one-and-one but Caleb Murphy’s half court heave didn’t fall.

“Huge and he had some offensive buckets that were huge too,” Etienne said. “That charge is not the first time he’s done that but I’m glad that a lot of big men don’t want to step in and take a charge, they’d rather be at the rim blocking. But he sacrifices his body for us in crunchtime. That was the play of the game in my opinion, for him to do that is a great thing and that’s what Shocker basketball is.”

With Etienne’s improvement over the offseason, Brown said that it was a focus to give him the ball and create something off the bounce.

“Tyson is a player of the year in this league and I wanted to get his hands on the ball. He did a great job of driving the basketball and picking up the foul. That’s where he’s improved. Last year, he was more of a catch and shoot guy. Now, he can break you down off the bounce and get his own shot or create a shot for someone else.”

Etienne led the way for the Shockers offensively in the contest with a team-high 20 points on 6-17 shooting, including four three-pointers.

Etienne said that WSU’s experience in close games throughout the season has allowed them to feel more comfortable even if they get to a slow start.

“You attest what you go through off the court and you apply it on the court,” Etienne said. “It looked shaky for a long time for us on the court. South Florida had an amazing game, they made shots, they got second chances but at the end of the game you have to have the wherewithal to stay present and know it’s eventually going to shift. If you stay positive and stay at the grind you’ll come out victorious and I believe we did that.”

Last season, the American Athletic Conference Tournament was canceled due to COVID-19. So for many players on this year’s team this is their first taste of postseason basketball.

Etienne said that being able to play in the tournament this year has been exciting after missing out last year.

“It’s so exciting,” Etienne said. “I was a freshman last year and to have our season cut short, I didn’t get to experience postseason play. Just to be out here for the first time is an amazing feeling. I’m excited to do it with my teammates and my organization.”

The Shockers will advance to the semifinals of the AAC Tournament and will face off against the winner of Cincinnati-SMU. The game is slated to tip-off at 2 p.m. inside Dickies Arena.