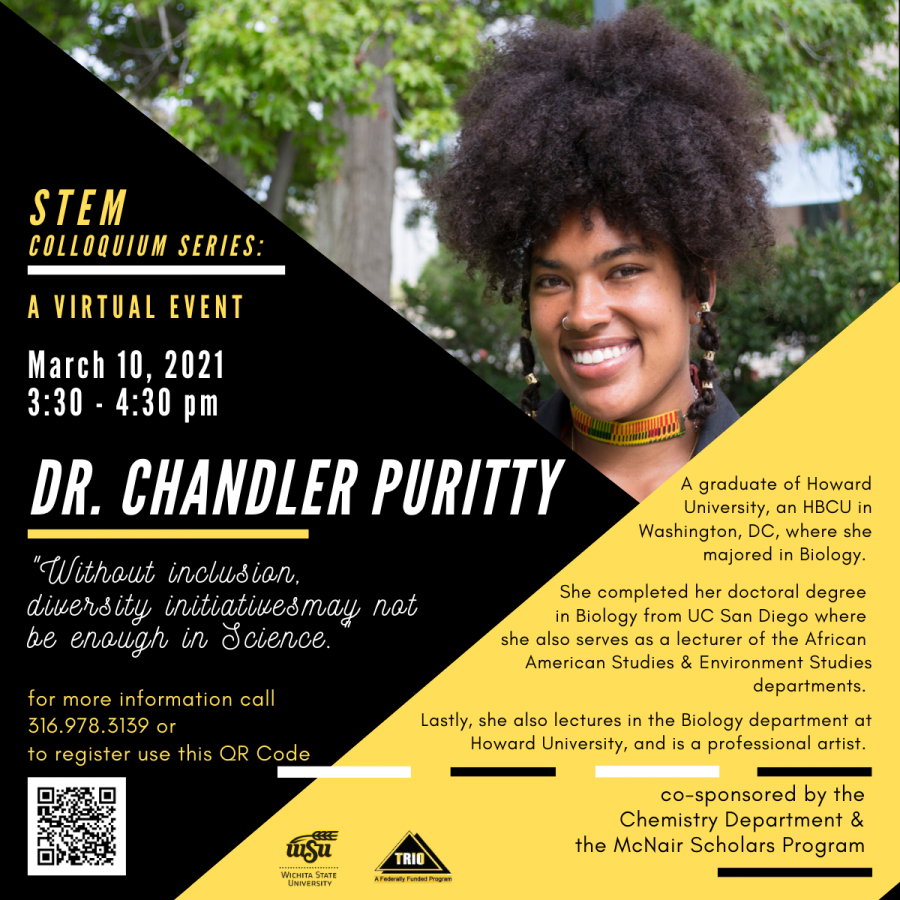 Dr. Chandler Puritty hosted a virtual chat on March 10, that was about diversity and inclusion in the science field.

As part of the Stem Colloquium series, Dr. Chandler Puritty hosted a virtual chat on March 10, that was sponsored by the Chemistry Department and the McNair Scholars Program. Puritty hosted a discussion with science students and faculty from WSU about diversity and inclusion in the science field.

Puritty completed her doctoral degree in biology from UC San Diego, where she now serves as a lecturer of the African American Studies and Environment Studies department as well as lecturing in the biology department at Howard University.

Puritty went to high school in Wichita, and said that there are only 2% of African Americans in the environmental sciences field.

“The first year of graduate school is the leakiest part of the pipeline, and so most students of color, not because they aren’t capable or not interested . . . choose to not continue,” Puritty explained.

Puritty said that this ‘awoke a fire in her belly’ and she became passionate about figuring out why she felt more stressed and less confident in predominantly white spaces, at a historically Black institution.

Puritty wrote an article for Science magazine titled, “Without inclusion, diversity initiatives may not be enough in Science,” that was inspired by her attendance at a panel for recruitment and retention of students of color. All of the members on the panel were white, and she was only left 30 minutes at the end to join into the conversation.

“I actually wrote that paper out of necessity, and not for fun, not for prestige, not for glory . . . I couldn’t think of a better way to express how uncomfortable, repressed, and unseen I felt,” Puritty said.

After completing graduate school, Puritty said she was tired of science performance, and was still really interested in diversity and inclusion, but most of the positions that she was looking into did not include both of those things.

“For me, I was like, ‘no thank you, I would rather do both,’ and now I develop courses where I teach on intersectional environmentalism, mostly through the lens of systemic racism,” Puritty said.

Puritty said that diversity is being notified about a school dance, where inclusion is being invited to the dance. Puritty said it is important to feel wanted in a space.

“What we have going on here in the western world, because of our history and the people who have historically led science, which is largely cis-gender white men . . . there is a culture and a way that things are done and because it was such a siloed thing for so many years, what we understand as modern science is very much inseparable from western patriarchal cultures,” Puritty said.

Puritty spoke about how people from low-income backgrounds are sometimes unaware of federal funding and scholarships for college education, as well as science as a career option.

Communities of color are the most impacted by environmental issues around the world, and in the science field they are missing their perspectives and experiences.

As a woman of color, Puritty said she feels that science is clearly biased towards people who have privilege to explore the unknown for the sake of knowledge.

“Of course we need to save the planet, but I can’t focus on these grasses while my timeline is blowing up with news of Black men getting shot in the street,” Puritty said.

Puritty said that colleges need better representation, where students of color can feel safe and empowered in their positions as scientists.

“With respect, I think we need to make more room for critics, because in my eyes critics are the only true optimists, because we are well behind on our evolution . . . We have a lot of work to do and we need to welcome these criticisms and these conversations,” Puritty said.

Puritty said that she felt more confident performing in science spaces when she stopped trying to blend in to a program where she was the first Black woman in 15 years , and instead dressed as feminine as she wanted and wearing whatever made her feel strong.

“Being the change that you want to see is the best way to advocate for yourself . . . I deserve to take up space here,” Puritty said.