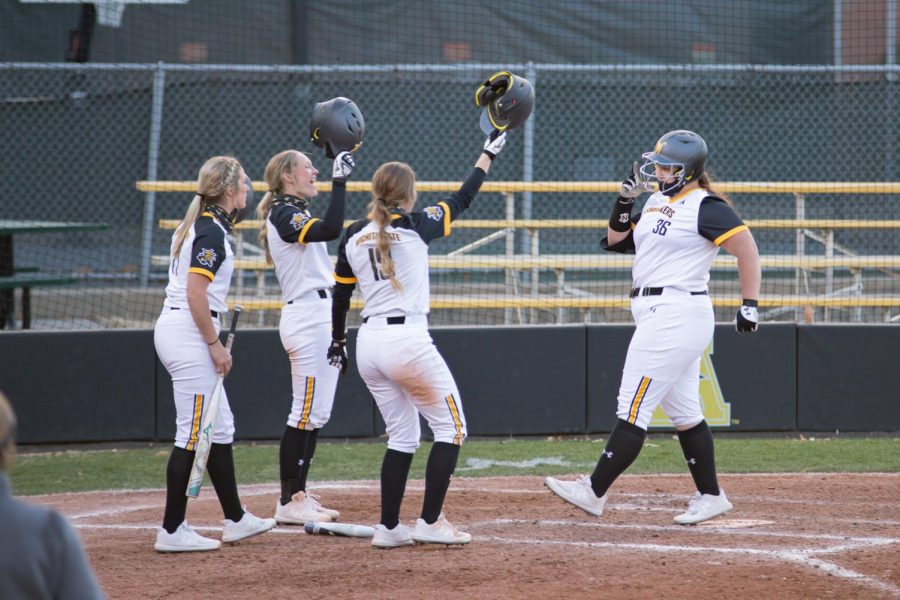 The Wichita State Softball went 2-0 at home on Thursday, March 11. The Shockers beat Omaha 1-0 in game one. The Shockers then went on to beat Missouri State in game two by run – ruling them 13-2.

In the first game, there were no runs scored until the bottom of the 6th inning. Senior third baseman Ryleigh Buck got a hit out to left field. Freshman center fielder Lauren Johnson scored the lone run of the game, all the way from second base after a throwing error from Omaha’s right fielder.

Senior pitcher Bailey Lange gave up four hits, and struck out six batters in a complete game shutout, while recording her sixth win of the season.

Offensively, senior catcher Madison Perrigan led way as she went 2-3 at the plate along with a double.

In WSU’s second game of the day, this one coming against Missouri State, sophomore second baseman Sydney McKinney and freshman right fielder Addison Barnard both got on base in the bottom of the 1st inning. Perrigan then hit a home run, giving her an RBI and the Shockers scoring three runs. Both Barnard and Perrigan collected homers in the victory along with four RBIs each.

Head Coach Kristi Bredbenner said she was glad to see the improvement on offense compared to game one against Omaha.

“I felt like we really had to focus on hardline drives,” Bredbenner said. “Much better offensively.”

The Shockers continued to pull ahead in the bottom of the 2nd inning, this time scoring 10 runs in the inning. Barnard launched her first career grand slam in the inning, while also giving her eight total home runs so far this season. McKinney, junior left fielder Wylie Glover, and senior second baseman Kaylee Huecker scored runs as well.

Later on in the inning, Ryleigh Buck and Bailee Nickerson walked and Bredbenner went to Lauren Mills off the bench to pinch hit for Camryn Compton. Mills went on to launch a three-run home run to complete the 10-run inning. The Shockers would add one more run to the scoreboard with a bases loaded walk from Perrigan.

Missouri State scored two runs each at the top of the third inning with an RBI groundout and an RBI single.

On the pitching side, junior pitcher Caitlin Bingham pitched all five innings while she allowed only two runs on three hits, and struck out three batters.

Next up, the Shockers will travel to Stillwater, Oklahoma for the Mizuno Classic. WSU will start the tournament on Thursday with a game against Oklahoma State at 5 p.m. inside Cowgirl Stadium. The Shockers will play five games in Stillwater including doubleheaders on Friday and Saturday.