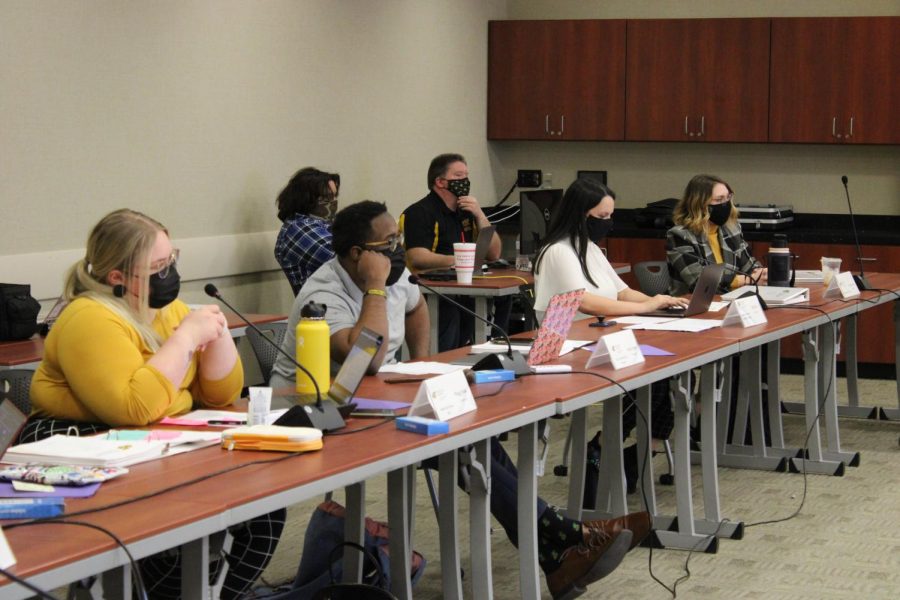 The Student Fees Committee’s proposed budget includes a 1% student fees increase, which is an increase of $4.07 per tier one student— an undergraduate student enrolled in 9 credits or more.

The committee met  last week to finalize a proposed budget that will be sent to the student government’s budget and finance committee for review, then SGA’s student senate for a three-read process before being sent to the university president to be signed.

Model UN’s entire student fees request was rejected. The request,  $18,863, got cut down to $0 after some committee members cited that since Model UN was a completely student run organization, they did not meet the qualifications to be sent through the student fees process. The only two exceptions to that rule is the Student Government Association and The Sunflower.

Speaker of the Student Senate Olivia Babin also cited that the majority of their proposed budget would be used for travel, and claimed that student fees should not be responsible for funding any sort of student travel.

“We do not pay for travel for any of these groups [that ask for student fees],” Babin said. “That is not fair.”

After much deliberation, SGA Advisor Gabriel Fonseca recommended that if the committee chose not to allocate money to MUN, that they would block their reserves from being swept for a year, so the group had enough money while they transferred to a different funding process.

Budget and Finance Chair Maggi Hole made the motion, and it was passed with no votes against.

The CSG Visiting Artist series also left the process with no money allocated in the proposed budget. Babin made the motion to allocate none of its $3,122 request, citing that there was not enough attendance at these events to allocate money for. The motion passed with one vote against.
Federal funding

Babin moved to only allocate $4,500 to Student Support Services out of their $17,000 educational opportunity fund request, arguing that EOFs should only go towards money that ends up straight in students’ pockets — like scholarships.

When representatives brought up concerns that a big cut could harm the program that many students around campus utilize, Babin argued that this service gets federal funding, and would be okay without student fees money to pay for their operations.

The motion carried with a 7 to 1 vote.

Similar conversations surrounded the Office of Disability Services, it requested $20,000. After a motion was made by Representative Rexhd Martin to fully fund the program, Babin argued that the office was federally mandated to exist. Therefore, if need be, they could find the funding elsewhere.

“I do not believe student fees should be used for things that are federally mandated,” Babin said.

The original motion to fully fund passed with a 5 to 3 vote, but was later revisited. A new motion was made by Babin to allocate $10,000 to the Office of Disability Services, that was passed with no votes against.

The Student Government Association’s budget was one that involved much debate and discussion surrounding a proposed raise to SGA workers’ salaries, which was passed by the senate earlier this year.

After discussing their proposed office expenditures budget, Vice President of Student Affairs Teri Hall voiced concerns that cutting other organizations but fully funding their request and using it for raises could reflect poorly on the association.

Many representatives disagreed, with Student Body Vice President Mackenzie Haas saying raising their own workers’ compensation could set an example to other organizations.

However, other representatives disagreed with funding the full request. Martin argued that raises should start at the bottom— not with the student government.

After tabling the line item, the committee revisited and decided to lower the office expenditures budget to $255,197, in order to allocate $244,803 to the Student and Organizational Fund— a fund that goes straight towards student groups and individuals who need funding.

Even though many requests saw big cuts, many organizations and scholarships received exactly what they asked for.

Out of all the Educational Opportunity Fund requests, the ones who received their full request were:

Out of Student Support Services, those who received their full request were:

The Office of Diversity and Inclusion was the only line item to receive more than their request. Their original request was for $112,912, and they received $137,912 — in order to be able to fund their Passage2Success program.