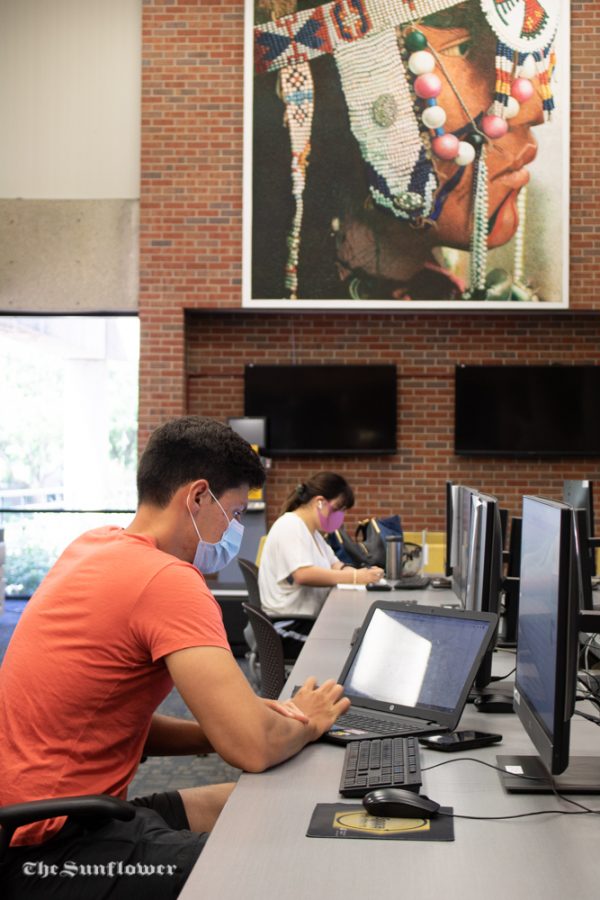 Senior, Elio Lago is using his laptop at the Ablah Library while practicing social distancing. Certain computers in the library have signage that prohibits students from working side by side with each other.

The online class fee has been a forum of much discussion recently due to many students having to take more remote classes than they would a normal semester. With the extra online fee, many of those classes end up costing more than normal in-person classes would.

“It was really a burden for students to have to enroll in online courses when they weren’t expecting those additional costs,” Lefever said. “So, in response, faculty then were listing their classes as hybrid even though they were online to save their students that extra fee but the problem that created was students thought they were enrolling in a hybrid class, which really wasn’t a hybrid class. Good intentions, but  it kind of backfired.”

Lefever said the university came up with two separate models.

The first model would increase the $7.75 campus infrastructure fee for all courses to $34.25. This fee would be the same for every class, no matter what college.

The second model would increase the campus infrastructure fee to $21.75, with specific course fees adjusted for each college. This fee would give different colleges more input on class costs for their students.

Lefever said spreading the fee across all classes made the most sense.

“53% of those fees really go to support every student on this campus,” Lefever said. “So from an equitable point of view, it really makes much more sense for it to be distributed across campus to all students.”

Lefever spoke in public forum during Wednesday’s Student Government Association Meeting to get student’s input. The majority of student senators spoke in favor of model b.

“If they’re having a semester where their finances are really tough and they need to have a semester that’s cheaper, to have the option to [take classes] that might have no fee, as opposed to [classes] that have a higher fee,” Speaker of the Senate Olivia Babin said. “As opposed to all classes costing the same, there’s no way you can have a cheaper semester.”

The selected model will go to the president’s executive team before ultimately requesting the Kansas Board of Regents’ approval.