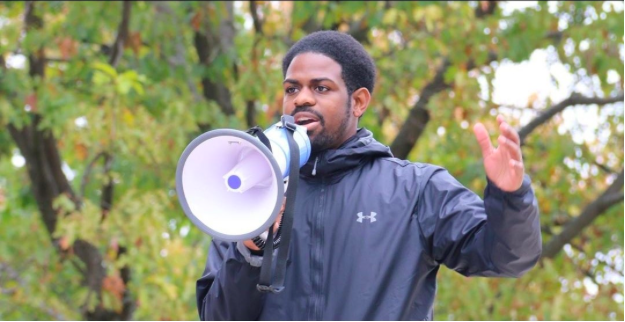 Travis Washington started a petition to change the way we hold law enforcement accountable for the shootings of unarmed individuals. To date, the petition, called the Hands Up Act, has 2.7 million supporters.

In December 2018, Travis Washington created the ‘Hands Up Act,’ a policy that would require police officers who shoot unarmed citizens to serve a mandatory 15-year- sentence. As of today, Washington’s petition has 2,738,750 signatures.

Washington joined the Wichita State community in January after receiving both a B.A and M.A. from Southern Illinois University Carbondale. He came to WSU to receive his teaching certification before beginning a position teaching sixth-grade math.

“I was listening to a speech by Dr. (Martin Luther) King Jr. about how he woke up one morning, and he was receiving death threats from white supremacists saying they were going to blow up his house and hurt his children,” Washington said. “And he sat down, and he prayed, and he said ‘Lord, I am trying to do what is right. Give me a presence, give me a feeling to know what is right.’

Washington said he felt this presence in his stomach and all around him, saying he should fight on.

“That’s why I published the petition,” Washington said. “It was a spiritual experience that’s hard to describe.”

Washington is hopeful but not convinced.

“People will put you on TV. They will give you a platform, but that does not mean that they support you,” he said. “I’ve had six Governor’s call me, and they did not pursue me. We have to keep this pressure up. There have been so many names that we can just move onto the next name instead of having accountability.”

“I said this in my Ted Talk — by punishing somebody,” he said. “If we hear cops using racial slurs or see them beat somebody, what’s the punishment?”

Washington said for him, accountability means making sure that the individual is held responsible for their words and actions. The individual, not the police department.

He said when a family receives money in a settlement after a loved one has been shot, it’s essential to realize that they don’t want money. They want justice.

“Money can never replace a life,” he said.

NPR reports that since 2015, police officers have fatally shot at least 135 unarmed Black men and women nationwide. NPR reviewed police, court, and other records to examine the details of the cases. At least 75% of the officers were white.

In the last year, the United States has seen protests in every major city and the Black Lives Matter movement nominated for a Nobel Peace Prize.

“We’re getting there because every day is the moment,” Washington said. “All it takes is for one more person to be murdered in front of our eyes for us to start protesting again.”

Washington said he feels that what’s holding the movement back a little bit is COVID-19.

What needs to happen now, Washington said, is passing the Hands Up Act. It will confirm that change is happening, he said.

As for personal validation, Washington has had some great moments in this pursuit which have given him the strength to keep going.

“Meeting Michael Brown’s mother, Lesley McSpadden and meeting Tamir Rice’s mother. That did it for me,” Washington said. “Antwon Rose’s mother signing my petition — I remember her saying ‘thank you for never giving up.’

When he graduated with his Master’s degree, Washington carried Antwon Rose’s picture across the stage with him. He said when those three mothers gave him their blessing, that was all he needed.

He has since gotten Breonna Taylor’s mother and Jacob Blake’s father to sign the petition as well.

“This was before I had a million signatures, and at the time, their support was everything,” Washington said.

“The senators — it really doesn’t matter—the mothers who felt the pain that means more to me than anything else. Nobody can tell me that I’m wrong. They confirmed it,” he said.

The last year has seen the petition grow by leaps and bounds. At the start of 2020, Washington’s Hands Up Act petition had 410,00 signatures. He then gave a Ted Talk in Carbondale, Il about the proposal. But the Ted Talk took a few months before it was posted.

It wasn’t until George Floyd was murdered that the numbers boosted, Washington said. He got a million new signatures in one week. Then local news agencies started to pick up the story. Washington was happy with that but said he was more excited when these media outlets began showing and sharing the petition on their websites.

“When a conservative local news organization posted the petition, and then I got invited out to Chicago to speak in front of a crowd of 5,000 people, it was like ‘whoa.'”

He said he feels like the process was moving, but then COVID got the best of it. Like many things.

So what keeps him motivated?