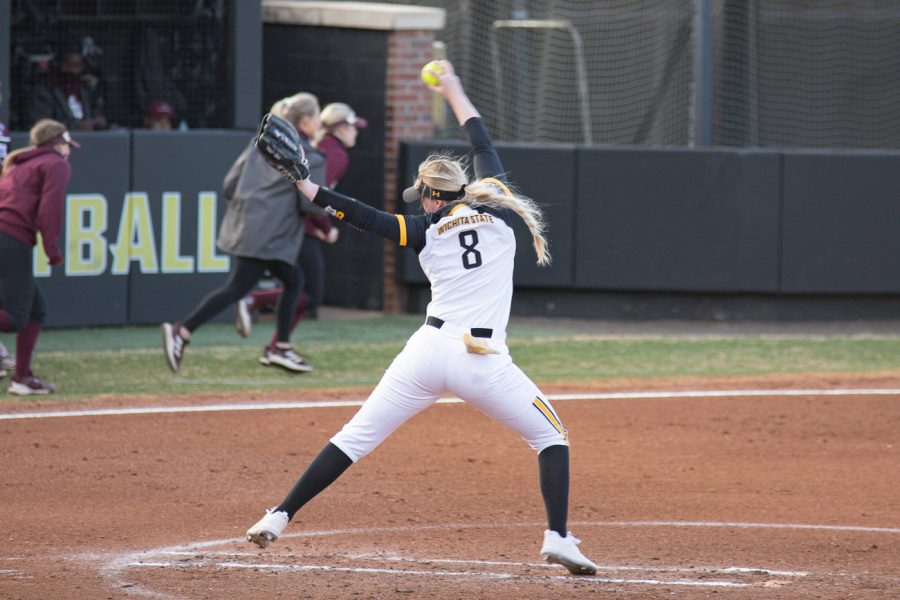 The Wichita State Women’s Softball Team took part in the Mizuno Classic, hosted by Oklahoma State this weekend. WSU finished off the weekend with a 4-1 record, including the highest win against a ranked team in program history.

The Shockers started out hot by beating No. 6 Oklahoma State team in game one of the tournament on Thursday.WSU scored five runs in the 1st inning. Junior designated player Neleigh Herring started the scoring for the Shockers with an RBI single, which led to more runs scored. In the 2nd inning, senior catcher Madison Perrigan hit an RBI double, followed by an RBI single from center fielder Bailee Nickerson.

Oklahoma State’s two runs scored came from two home runs in the 4th inning. Perrigan got another solid hit in the 5th, and freshman utility player Jesscia Garica scored the final run of the game in the 7th.

Senior pitcher Bailey Lange started for the Shockers in game one and allowed only two runs on six hits, two walks, and three strikeouts.

In game two against UTSA, the Shockers continued their winning streak from a strong performance the night before.

The first two innings remained scoreless. However, at the top of the 3rd, the Shockers pulled ahead. Perrigan scored two runs in this inning, including her 8th home run of the season. UTSA responded in the bottom of the 3rd with another run scored.

In the 6th inning, sophomore shortstop Sydney McKinney hit an RBI single driving in freshman first baseman Camryn Compton to score a run for the Shockers. UTSA scored another run as well in the 6th.

The last run of the game came in the 7th inning when senior 2nd baseman Kaylee Huecker got a run that led to Herring scoring.

Junior pitcher Erin McDonald started for the Shockers and delivered 4.2 innings, and allowed only one run on three hits. She also walked three and struck out eight batters. Lange pitched the rest of the game by pitching 2.1innings.

In the final game of Friday, the Shockers continued to pull ahead on their winning streak against UMKC. The game remained scoreless until the 3rd inning, until Compton hit an RBI double to score the first run. Huecker, and Herring then followed with runs scored. UMKC then scored a run at the bottom of the 3rd.

The Shockers didn’t let up though after scoring five runs in the top of the 5th. UMKC scored their final runs of the night with two home runs in the bottom of the 6th. In the 7th inning, Freshman right fielder Addison Barnard added an RBI double.

WSU wrapped up the Mizuno Classic on Saturday with two more games and the first coming against UTSA. The Shockers defeated the RoadRunners in a low-scoring game, 3-1.

Bailey Lange received the start and collected her ninth complete game after allowing one run while tallying a career-high 10 strikeouts in the victory.

On the offensive side, the Shockers took an early two-run lead after a bases-loaded single from Bailey Urban drove in two runs. UTSA would load the bases in the fourth inning but were only plated a run.

In the tournament finale, WSU’s winning streak was snapped at the hands of the No. 6 Cowboys, 5-2. OSU’s five runs came from the home run as the Cowboys launched a two-run homer in the third and three-run in the fifth.

The Shockers’ lone runs would come from Ryleigh Buck who delivered a two-run double in the top of the sixth. On the mound, Caitlin Bingham suffered the loss after giving up five runs in 4.2 innings pitched.

Overall, the Shockers went 4-1 on the weekend and are now 2-2 on the season against ranked opponents. WSU will return home next weekend as they open up American Athletic Conference play against East Carolina for a four-game series. The series will start on Friday and first pitch is scheduled for 5 p.m.