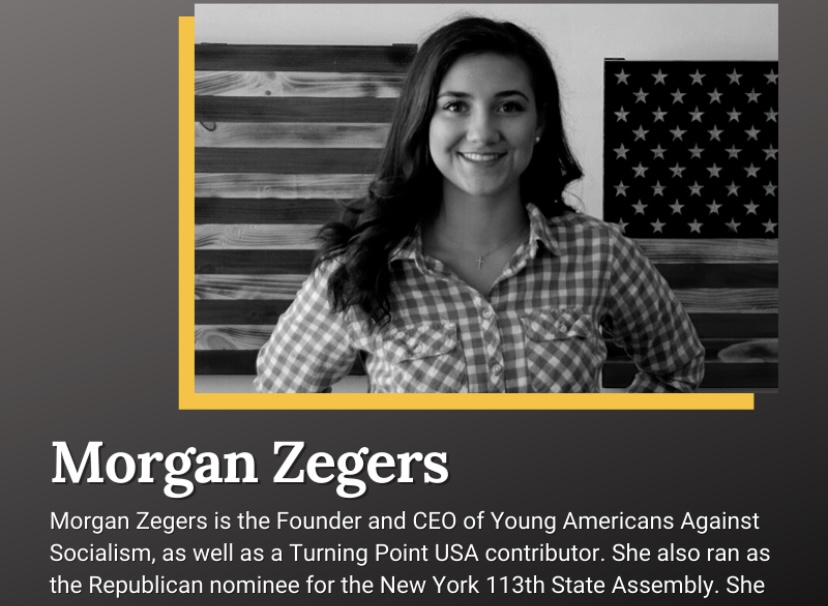 In honor of Women’s History Month, three members of SGA’s Diversity, Empowerment and Inclusion committee selected one woman each to highlight in a social media post. Along with Zegers, the post highlighted Janet Jackson and Shoshana Zuboff.

“Please don’t let people with communist hammer and sickle sign in their bio convince you that I’m evil just because I’m an average conservative,” Zegers said.

Gallegos said that her decision to highlight Zegers was made after conversations regarding a need for a conservative to be included in the post.

“The Diversity, Empowerment, and Inclusion committee of the Wichita State SGA asked each member to submit a global woman to highlight for Women’s History Month. It was discussed by other members of the committee that a conservative woman be highlighted,” Gallegos said in an email sent to The Sunflower. “Knowing this, I chose to highlight Morgan Zegers and followed the instructions set forth to do so. My selection and bio on her was approved as it ended up being posted on social media.

“Since the post on Wednesday, I have received an email requesting I resign from my position as senator and member of the DEI committee, as well as backlash from fellow senators in and out of my committee.”

SGA’s Director of Public Relations David Garcia spoke in a public forum during Wednesday’s meeting to address social media’s role in the situation.

“The SGA social media accounts are for all members of the association, whether individuals agree or not,” he said. “We support the right for all senators to state their opinions and share their points of view as duly elected members of the senate.

“Only statements coming from elected head of the branches or association resolutions are recognized as formal stances of the association as a whole.”

Multiple senators voiced their opinions regarding the situation during the remarks and announcements portion of the meeting. Senator Calvin Pomeroy said that as a member of the committee that was involved in the post, he was disappointed to see who was highlighted.

“I was personally very frustrated to see the inclusion of Morgan Zegers in our women’s history month celebration,” Pomeroy said. “Her organization Turning Point USA has multiple documented instances where a leader or organizer was outed as a white supremisists.”

In 2019, a leaked video showed a college chapter leader of Turning Point USA shouting “white power” and other offensive phrases. Shortly after, the organization fired the individual and released a statement condemning his actions.

Several other employees of Turning Point USA have also been called out for racist comments, Huffpost reported.

“I believe every action should be taken to delete this post and remove any person from this organization who actively supports this belief,” Pomeroy said.

“White supremacy is an awful and prevalent thing in our society and the fact that this organization went out of their way to promote someone who is an advocate for homophobia .. and white supremacy is shocking to me,” Mounts said.

“I can’t believe the organization has let itself come to this point.”

Mounts said if he did not see a resignation from the senator by 5 p.m. Friday, he would submit a letter to the senate review board, citing that the senator broke the association’s code of ethics.

“This space has to be a space that promotes the ability and the opportunity for different minded people to be able to be able to engage in discussion and debate on policy that impacts and affects students on a day to day balance,” Fonseca said. “What’s hard about it is balancing our personal thought and personal values to the creation of what this body was intended for 109 years ago.

“We have to remember that whatever your peers and my students are saying on social media, it is not a place for us to undervalue that perspective and that opinion.”

Fonseca said that in order to represent the entire student body, SGA had to listen to all sides of issues and welcome healthy debates and conversations.

Senator Ella Ihrig argued that discussing it during the meeting would not lead to anywhere productive, and encouraged the senators to make their statements and opinions known elsewhere.

“[It is better if we] just let this be, we have had our official stances and we are all free to make our personal stances elsewhere, I just don’t think bickering about whether this is a good idea back and forth or not is productive,” she said.

EDITOR’S NOTE: This story has been updated to add a statement from Senator Olivia Gallegos.