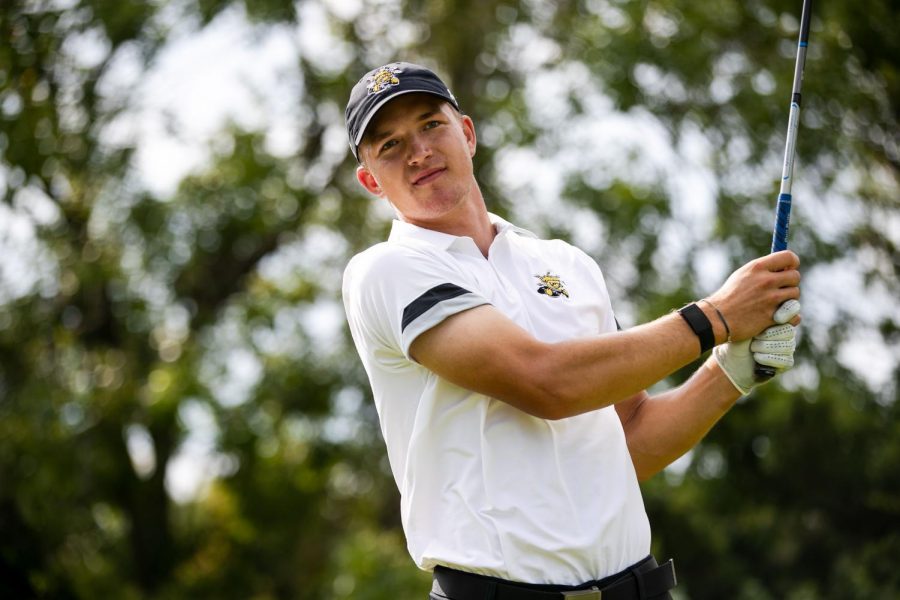 Marcus Wochner has quickly found a home at Wichita State, despite being almost 5,000 miles away from his hometown of Holte, Denmark.

Wochner originally made the defection to the United States two years when he decided to continue his golf career at Odessa Community College in Texas. Wochner has adjusted to the new culture, which he said has been a difficult transition.

“It’s been very different, especially the culture,” Wochner said. “The most different thing has been mostly everything basically.”

Wochner said he tries to stay in touch with his family daily.

“It’s not too bad,” Wochner said of the adjustment. “I’ve been kind of used to it now that it’s my third year in the U.S. and they’re used to it too.”

During his time at Odessa CC, Wochner caught the attention of Wichita State Head Coach Judd Easterling at the Herb Wimberly Invitational in Las Cruces, New Mexico. They both kept in contact and ultimately Wochner signed to play golf at WSU in November.

Wochner said that Easterling’s ability to help him reach his full potential was crucial in his decision.

“They wanted to show me off and give me the right kind of opportunities to get my full potential out,” Wochner said. “That’s why I kind of felt that especially Judd would do all this and try to get us going and get our full potential out. That was the biggest game changer for me.”

Wochner finished in a tie for eighth place, helping lead the team to the Grand Canyon University Invitational title, in his first tournament as a Shocker.

Wochner, like many of his teammates, was finally able to get back on the course after last season’s premature ending due to COVID-19.

“The last nine holes I could get that nervous feeling, you’re playing a tournament now, you’ve got to get yourself up and now it’s counting,” Wochner said. “That feeling wasn’t new because I’ve played tournaments before but it’s getting that feeling again, it’s actually counting now.”

Wochner followed up his eighth place finish in the first tournament with a better performance the following week. At the Twin Oaks Intercollegiate in Springfield, Missouri, Wochner finished in sole possession of a third place, leading the Shockers to a runner-up finish at the event.

Wochner was awarded as the American Athletic Conference Golfer of the Week based on that performance. He became the first Shocker to win that award since the university joined the conference in 2017.

“I didn’t really feel that I played my best golf but it just all came together. I made a good shot here and there and made up for some of the bad shots. I’m learning so much from the past two tournaments from how to score, what to think, what to feel. Basically, it’s very nice to be in competition again.”

Head Coach Judd Easterling said that Wochner’s performance in these two tournaments has exceeded his expectations for him.

“I really knew he was going to come out and have an immediate impact,” Easterling said. “He’s really come in beyond our expectations. He’s come in, worked hard, pushed a lot of our players that have been here for a couple of years. He’s just a good guy to have on the team, for the culture and environment. He’s just a really good teammate.”

Throughout this offseason, Wochner and his mental coach talked about one simple question. ‘Why do you play golf?’ The answer was simple.

“I play golf because it’s fun.”

Wochner said that this mindset has paid dividends in his early season success.

“I don’t want to be overfocused on the golf course but I’d rather have fun and just play golf. Either you hit a good or a bad bad shot so why not get it over with quicker instead of thinking about a whole lot. Just hit the shot, it’s either a good one or a bad one. Basically, just have fun with it. That’s the biggest difference I’ve had over the last three weeks.”

Easterling said that as long as Wochner continues to work on his craft and listen to the coaching staff, he’ll have a chance to play on the professional level.

“If he continues to do what we expect and what we ask of him and continue to put in the same amount of work that he’s doing now, he’s got all the chances of playing golf professionally,” Easterling said. “He’s got everything that those guys you see on TV have already. He just needs to continue to develop and get better. He’s going to have a great career at Wichita State.”

Wochner and the Shockers will next be in action on Sunday during the three-day Hootie at Bulls Bay tournament.