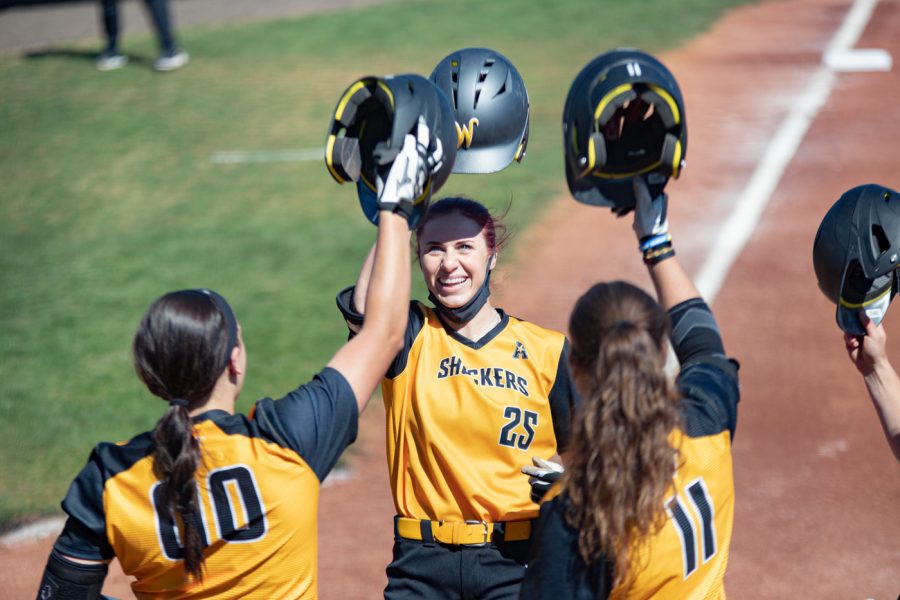 Wichita State sophomore Sydney McKinney celebrates after hitting a home-run during the game against ECU at Wilkins Stadium on Mar. 28, 2021.

Wichita State started off their first conference series with a series victory against East Carolina at Wilkins Stadium. With the victory, the Shockers’ record sits at 20-5.

On Friday, Wichita State defeated the Pirates, 16-1, and led consistently throughout. The Shockers started off with four runs scored in the bottom of the first.  Junior designated hitter Neleigh Herring hit a home run straight to center field. With her home run, Herring also got a four-run shot with the bases loaded.

In the second inning, senior catcher Madison Perrigan, and senior center fielder Bailee Nickerson both scored runs. In the bottom of the third, runs were scored on a bases-loaded walk from Perrrigan and a two-run double from senior third baseman Ryleigh Buck.

Senior pitcher Bailey Lange gave up one hit and one run, and senior pitcher Hailey Martinez closed the game out.

On Saturday, the Shockers started out hot again with 4 runs scored in the bottom of the 1st. Herring hit a single with the bases loaded. The rest of the runs scored came from McKinney’s RBI, and a double from Buck.

The Shockers took the lead again at the bottom of the 5th with two runs scored from freshman Jessica Garcia and McKinney, giving them a 7-4 victory.Junior pitcher Erin McDonald had ten strikeouts, and allowed only four runs on seven hits in the win.

In game two on Saturday, the first two innings remained scoreless until freshman right fielder Addison Barnard recorded her 10th home run of the season in the bottom of the 3rd. ECU tied the game in the top of the 5th with a run scored tying the game 1-1. The Shockers responded at the bottom of the 5th with three more runs scored. ECU then took the lead at the top of the 7th, giving them the 8-4 win.

Barnard said she is not worried about hitting home runs or setting records, and that her main focus is to do whatever it takes to help her team win.

“I’m just really focused on trying to find a way to get on base,” Barnard said. “It could be an error by them, I mean as long as I get on base that is what means the most. Just trying to drive the ball up the middle. We’re a great hitting team and when the home runs happen we don’t really think about any records or anything. So when it happens it’s just awesome.”

The Shockers started out strong in the bottom of the 1st with homers from McKinney and Barnard. At the top of the 2nd, ECU scored their only runs of the game. However, Barnard hit a home run making it a three-run shot for the Shockers. This put the Shockers ahead 5-2.

Bredbenner said that their plan is to offensively not just hit home runs but to get up to the plate and make something happen.

“I thought today we had much more energy,” Bredbenner said. We know that we’ve got power and if we can get a good pitch or barrel it up we are giving ourselves a really good chance of having some success. It’s not our plan every single time to get up and hit a home run, we are just trying to hit solid contact and if it goes it goes, if it doesn’t go you know hopefully it’s a double or a single then we can make something else happen with it.”