Shockers look ahead to bright future after 9-8 season 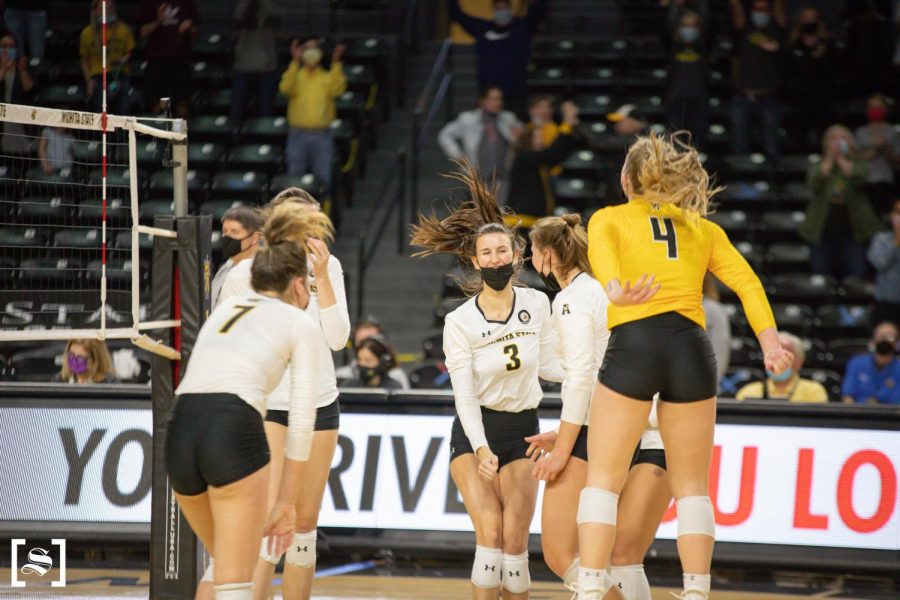 Wichita State celebrates after snapping an eight-match losing streak during WSU's game against Houston on March 26 inside Charles Koch Arena.

Despite an up and down season for Chris Lamb’s Wichita State volleyball team, things are looking up for next season and beyond.

After starting off the season on an eight-game winnings streak, the Shockers struggled down the stretch, finishing with a 9-8 record. WSU’s season was in doubt throughout the offseason, following the postponement in the fall.

The Shockers ended the season with a split against division-leader Houston. On Friday, WSU picked up a victory against the Cougars in four sets, while also handing Houston their first loss in conference play.

Sophomore Kayce Litzau said that even with the disappointing finish, this season can be viewed as a positive one.

“It shows the potential that we can play at,” Litzau said. “We never stopped fighting. I think it’s eye-opening for everyone on our team to realize that if we keep working hard and keep buying into the system, we are going to be so good.”

During the team’s 8-0 start, WSU’s pin attackers led the way to the team’s success, but faltered late in the season.

Lamb said that their opponents made adjustments which was a key reason to their struggles.

“Something that reared its ugly head here down the stretch is ‘Where’s scoring going to come from on the pins?’” Lamb said. “During that seven-game losing streak, when the middles weren’t scoring, we were in trouble.”

Lamb said that the Shockers have done well according to the statistics but have struggled to translate that into victories. WSU struggled in particular with closing out matches, losing three matches after leading 2-0 or 2-1.

“What Houston’s good at it is winning,” Lamb said. “When you out-hit teams, you out-dig teams, you out-assist teams and you don’t win, like Memphis here, like Tulane there . . . I’m glad of the production, but what about all these crazy little errors that occur? Those are all worth points. When those go away, we will be on the good side of 22-25, not on the bad side.”

One of the bright spots in the final games was the performance of freshman Natalie Foster. Against Kansas hit .385 along with seven. Foster also collected a career-high 17 kills in WSU’s victory over Houston.

“Natalie Foster has great arm talent,” Lamb said. “And she wants to be good. When she gets stronger, and a little more experience as a blocker, we probably have a four-year starter. Way ahead of schedule.”

Freshman outside hitters Morgan Weber and Mariah Buss both made an impact this season. Weber collected a career-high 18 digs on Friday while Buss collected six kills across the weekend series with the Cougars.

Freshman Morgan Stout sat out the spring with an injury but Lamb has high expectations for Stout upon her return.

“She’s the most talented, by position, of any of the freshmen,” Lamb said. “I would like to say in a year or two there’s nothing on the volleyball court she shouldn’t be able to do – she’s just that fast, she’s just that physical.”