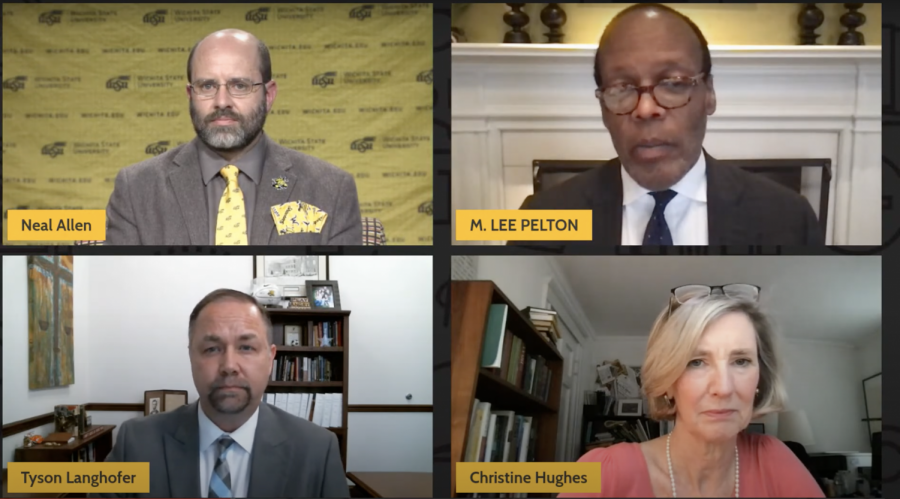 On Wednesday March 31 Wichita State hosted a virtual panel discussion titled “Speaking Freely on Freedoms of Expressions” discussing the right students have through the First Amendment to share their viewpoints without retaliation from the university.

Not only does Wichita State’s campus hold a wide range of students from different places, backgrounds, and interests, but it also holds a wide range of ideas and political leanings. While many people feel led to stating their viewpoints in a public space, a lot of students might feel uncomfortable sharing their ideas.

On Wednesday March 31 Wichita State hosted a virtual panel discussion titled “Speaking Freely on Freedoms of Expressions”. The panel discussed the right students have to share their viewpoints without retaliation from the university.

In a short introduction video, viewers were informed that it is inappropriate for a university to censor— instead, it’s important to vigorously debate these issues in order to maintain a free society.

“The First Amendment isn’t always celebrated, is it? Not when it forcefully refutes our personal beliefs or substitutes opinions for facts or when it offends our most cherished principles,” Pelton said. “At those times, it tests our human capacity for tolerance and forbearance and what it means to live in a free society.”

When asked what exactly the limits on free speech are, Hughes said that someone can not use free speech to incite someone to take immediate violent action.  She also said it is important to remember that it’s a limitation on government.  Slander and defamation are also limits on freedom of speech.

“The best approach is to do your own research and bring better research and engage with the idea that way, rather than censoring,” Langhofer said.

Allen said that it’s important to focus on a realistic understanding on what universities are able to do.

“What do our students want or need in terms of building their later careers and life goals?” Allen said.  “What ideas do we need to be talking about to have an informed citizenry that is able to be flexible and understand ideas that they might not have a lot of experience with?”

Langhofer said it’s important for students to have the opportunity to understand that just because someone has an opposing viewpoint does not mean their opinion isn’t valid.

“One thing to keep in mind is that most people, even if they say things that some of us would find objectionable, are likely doing it from at least partly non-objectionable motivations,” Allen said.

Langhofer said in the light of conspiracy theorists— such as flat earthers— it is important to note while they do have the right to share their ideas, at the end of the day, facts and truth will hold more than any theories with no evidence.

“When we create an environment where you allow students that disagree with speech to determine who gets to come speak, it doesn’t stop at Holocaust deniers,” Langhofer said. “It moves onto things like tariffs and immigration, which are debates that we need to have as a society … The students who don’t want to pay for the Holocaust denier, there are a lot of students with different views paying for the other side’s speech all the time.”

Hughes said that in private institutions across the country, first amendment rights are woven throughout all of their policy statements.

Hughes said that students should know that even though freedom of speech is protected by the first amendment, people are accountable for the reactions that they generate from their community— unless the response has stirred up real danger.

“When students say they feel unsafe and what they really mean is they are uncomfortable, I think it’s incumbent on us to give them tools to move past that point of discomfort and engage,” Hughes said.

Last week, a Student Government Association senator found herself in hot water when she decided to highlight Republican Morgan Zegers in a social media post. Many students did not agree with her viewpoints and called for the senator’s resignation— citing that anyone who shared those viewpoints should not be representing the student body.

In regards to that situation, Allen said that students want to be involved in broader discussions and that it is impossible to include all perspectives.  Allen said that people need to accept that there will always be disagreements, especially when anything of value is being decided.

Langhofer said that the idea that anyone can call for someone’s resignation whenever a disagreement occurs is a dangerous idea because it is not how it happens within real government positions.

“You are going to have people that you disagree with, and the goal is not to remove them, but to debate them and beat them with your ideas,” Langhofer said.