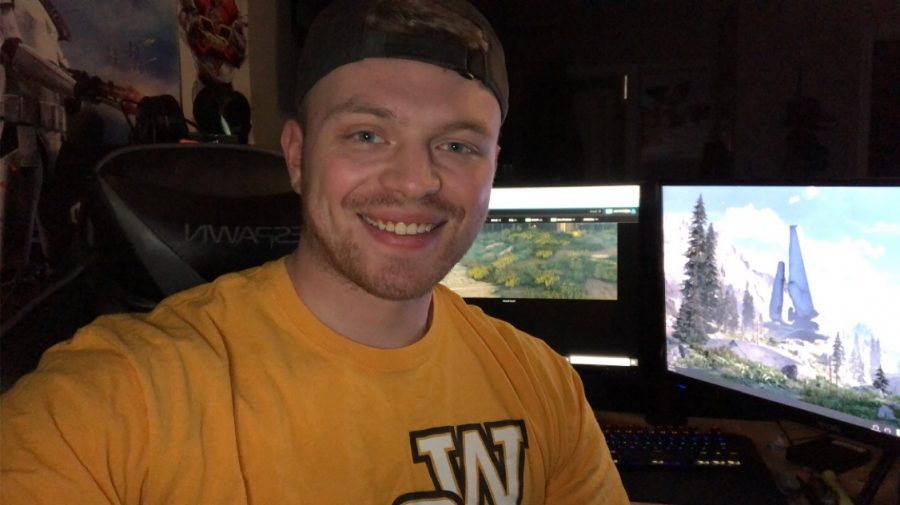 The video game industry has become an expansive outlet for creativity and artistic vision. While one may not realize it at first, there is actually an incredible amount of hard work that goes into creating an immersive game. When designing a game, all things must be considered, such as level design, textures, character details, etc. Even games like Fortnite have had a monumental amount of thought, planning, and love poured into them. The process of creating a video game is a collaborative effort that involves thousands of individuals giving every single pixel their utmost care; Zachary Sewell is well on his way to becoming one of those individuals.

Sewell has lived in Kansas his whole life. Raised in Salina, Sewell spent a good part of his childhood playing video games. Like most children, Sewell loved playing video games. However, while others would enjoy a game purely for entertainment, Sewell would get swept away by the details of an immersive online world.

Over time, Sewell’s love for gaming became his passion, and so, after graduating from Maize South High School, he pursued an Associate’s Degree in game design at Butler Community College. After earning his degree, Sewell transferred to Wichita State in 2019 to earn a Bachelor’s Degree. It’s taken a great deal of hard work, but all of it led him to a career-expanding opportunity with one of the most prestigious gaming companies on the scene.

Blizzard is a game development company that is most famously known for its popular massively multiplayer online game, World of Warcraft. Blizzard awarded Sewell with an internship that will grant him access to the best resources in the industry and will have him working with Blizzard’s immensely talented game designers. Sewell does not know what he will be working on specifically, but he does know that he will be involved with Warcraft’s level design team.

The internship was quite exclusive; thousands of individuals apply every year and Sewell was one of the lucky few who were granted the opportunity.

“I’m at a loss for words any time I bring it up. It’s a massive multiplayer game that’s out there and I get to be able to make stuff for it, and learn how they do things there.”

Sewell’s path towards his internship did not take place in a few days. The process was drawn out and required a fair amount of patience.

“Their application process was only from September to December. So last year there was that monthly set time where I applied. It was a simple process through Linkedin; just follow the questionnaire, apply portfolio, and a resume and cover letter, which I did,” Sewell said. “A couple months went by after the application process until finally I woke up and the first thing I saw on my phone was an interview request from a hiring manager at Blizzard.”

All of Sewell’s hard work had led up to his accomplishment. While at Butler, Sewell met a friend who currently works for Blizzard. It was this friend who told Sewell about the internship and convinced him to apply. After he transferred to Wichita State University, Sewell had access to more resources than ever before, as well as more advanced courses than what Butler provided. This allowed him to create projects that caught the attention of the hiring personnel at Blizzard. Sewell’s connections and experiences assisted him on his way to landing the highly coveted internship.

It takes a village to complete a video game that can connect with the masses; Sewell is now a member of that village and he could not be more honored. Sewell’s passion for game design is apparent. The amount of work that he put into his craft has started to pay off and the opportunities available to him are plentiful. Sewell hopes that his new internship will blossom into a career that he can live on and love doing at the same time.