Tennis continues hot start with victories over SMU and Pepperdine 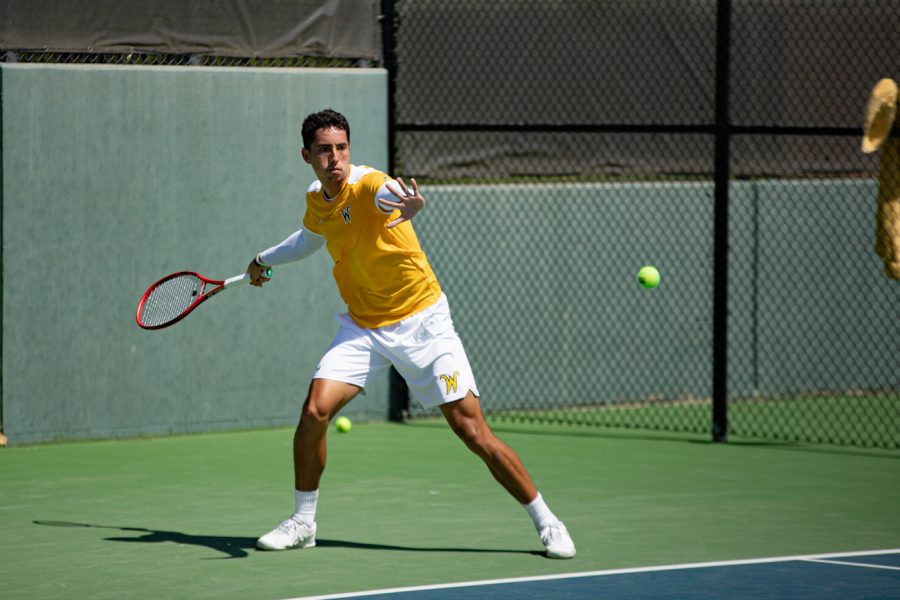 Wichita State Redshirt Senior Murkel Dellien returns the ball during the game against Pepperdine at the Coleman Tennis Complex on April 4, 2021.

The Wichita State Tennis team picked up a pair of ranked victories over the week against No. 48 Southern Methodist and No. 28 Pepperdine.

In their conference victory over SMU, the Shockers defeated them 4-1, picking up the series sweep over the Mustangs.

Murkel Dellien and Marius Frosa picked up a doubles victory in their first match since rejoining the rankings at No. 72. The pair picked up their fourth straight match victory.

The Shockers were able to secure the doubles point on Sunday against Pepperdine as the pairings of Stefan Latinovic / Nicolas Acevedo and Orel Ovil / Luka Mrsic both collected 6-2 victories.

The Shockers started off slow in singles, as Marius Frosa and Ray Lo both dropped their matches. But WSU responded as Dellien clinched the match victory by defeating No. 52 Adrian Oetzbach in three sets. Stefan Latinovic and and Orel Ovil also picked up three-set victories, leading to their third straight ranked win.

“We struggled at times closing it out,” Head Coach Danny Bryan said. “I think the guys believe in themselves but they still need to get used to being in these big matches and coming through. We have a lot of confidence and I’m really happy they were able to get over the hump.”

The Shockers have now collected their fourth top-50 win on the season. Coming into this weekend, WSU was the No. 34 in the rankings and should see a move into the 20s after a pair of ranked victories this week.

Bryan said that this has been something the program has building towards since he took over.

“I think the last four years we’ve been building to this point of the season and obviously with Murkel (Dellien) and Marius (Frosa), they were All-Americans two years ago, they’ve really been the cornerstone of our program and I think they’ve given the guys a lot of belief and they’ve been leading our team so it’s great,” said Bryan.  “It’s great for our program. They’re a legit team so that was a great win for us.”

The Shockers have a pair of ranked matches upcoming for this week against No. 27 Tulane and No. 29 South Florida. Both matches are on the road and WSU will travel to New Orleans and Tampa.