What the Shockers’ roster looks like for the 2021-22 season 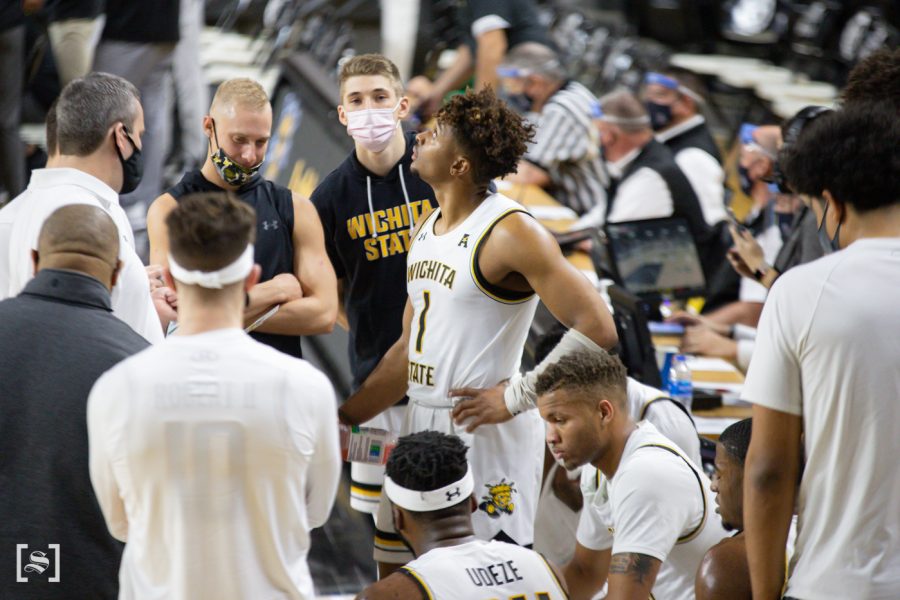 Wichita State sophomore Tyson Etienne looks up during a time out during the game against USF on March 6 at Charles Koch Arena.

Wichita State’s mass exodus grabbed many headlines last season when many young, promising players entered the transfer portal. This year has been a different story.

Last season saw WSU’s top three scorers all depart while this year they are slated to return four of their top-five scorers. Just like many other teams across the country, the Shockers are dealing with players opting to transfer to another school. WSU has six players from last year’s roster in the portal in hopes of finding a new basketball home.

Here is how next season’s roster is taking shape following the offseason departures:

The Shockers are waiting for a decision from redshirt senior guard Alterique Gilbert as he is yet to announce his plans for next season. Gilbert’s scholarship would not count against the 13-limit.

Head Coach Isaac Brown mentioned during his coaches’ show that Etienne could play more of the point guard position after still playing mostly off the ball last season.

“Now he can break you down off the bounce, he can get in the paint, he has deep range and you’ll see him next year playing a lot more point guard,” Brown said. “He’s proven that so we can put him at the one some, move Dexter to the two and Ricky to the three and I just like that lineup.”

The Shockers have had six scholarship players transfer so far this offseason, with only one announcing their next destination. Junior Trevin Wade was the first Shocker to enter the portal – one day after the end of the season – and has already announced his commitment to Eastern Kentucky.

The most sizable of the transfers was senior forward Trey Wade who entered his name in the portal instead of returning to WSU for his final season. Wade arrived at WSU after playing at UTEP and South Plains College. In his first season as a Shocker, Wade averaged 7.4 points and 5.4 rebounds per game. Wade started 27 of the team’s 31 games, a team-high.Wade had similar success this past season, averaging 6.7 points per game along with 5.6 rebounds per game.

There are currently 1,191 names in the transfer portal, according to Verbal Commits. Brown said in recent years he has tried to tell players the importance of staying with the program, even if they’re playing limited minutes.

“I tell kids all the time, ‘if you want to play more, go work on your game’,” Brown said. “Don’t just be one of those guys that when it doesn’t work out here, you want to jump and go somewhere else. Because that’s not how life works. It’s going to be tough, you just have to fight through it.”

WSU has already landed its first commitment of the spring recruitment period as junior college prospect Matt McFarlane announced his decision to play for WSU.

McFarlane, a 6’10 center, opted for the junior college route coming out of high school and played his first two seasons at Colby Community College. He averaged 10.7 points, 6.8 rebounds and 2.1 blocks per game while shooting 53.7% from the field this past season. McFarlane averaged 11.2 points, 6.4 rebounds and 1.8 blocks, the year prior.

Brown said that there has been a focus on adding length and size, and McFarlane would help fulfill that goal.

“We want to get more athletic inside. I think in this conference, you’ve got to have big time guys inside that can block shots, that can finish around the basket, so we’re always looking for that. You need guys off the perimeter that can create off the bounce, they can’t just be catch and shoot guys.”

The Shockers have been active recruiting players out of the portal including a couple of high-profile names. Duke transfer Jordan Goldwire has been reached out to by WSU. Goldwire averaged 5.8 points anf 4.0 assists per game last season with the Blue Devils and would be a graduate transfer.

Within the high school ranks, the Shockers have formally extended offers to two players, Kuluel Mading and Dondre Watson. Both players are forwards and are three-star recruits.

Prior to McFarlane’s commitment, Brown hinted at a couple recruits being close to finalizing their decisions.

“We’ve got a guy or two that’s ready to commit. Hopefully early next week we’ll get that done. We have weaknesses at certain positions that we need to get longer and more athletic at. So we’re trying to get more length and athleticism.”