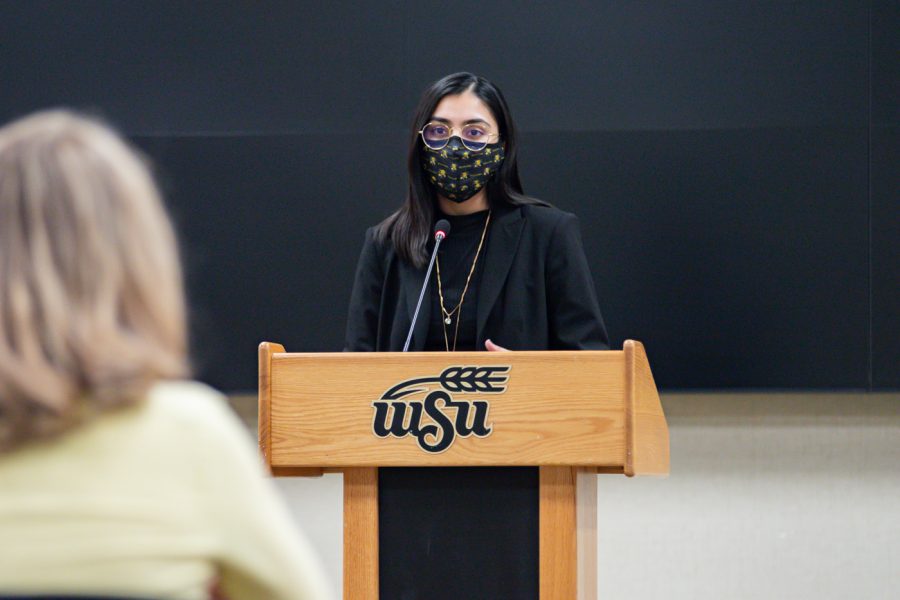 Student Government President and Vice President candidates Rija Khan and Kamilah Gumbs spoke at a town hall on Thursday, April 1 to discuss their campaign promises and goals. The event was held at the Rhatigan Student Center and was streamed to a virtual audience.

Khan is running for her second term as student body president and has served in SGA since she was a freshman. Khan previously served as freshman senator and ways and means chair.

Gumbs is in her first year as a senator for SGA and currently serves as the diversity, empowerment, and inclusion committee chair.

Gumbs and Khan met during an american politics class. From there, they were able to build a bond through their similarities as international students.

“From there we kind of clicked because we realized we were both not from the united states … our stories were different but similar in a sense,” Gumbs said.

One of their main goals for next session is to address food insecurity. The problem of food insecurity is a problem that needs multiple solutions, Khan said.

Khan signed an executive order creating a task force earlier this session. She said one task force wasn’t enough, so her and Gumbs are working to do more next year.

“We personally believe that this issue is more so than just for our students, it affects our community directly,” Khan said. “We know that the university is wanting to present changes, we want to make us the students present at the table to engage in those conversations, to present our ideas, and to further this goal of making sure that everyone has food or a plate.”

Khan and Gumbs both said their international background helps them as leaders.

Khan said that her background helps her to relate to students at a different level.

“I’m a woman of color, I’m an asian immigrant to this country, I am also a muslim,” Khan said. “I carry these titles that make me the first in the student body president role. This position already has so much that one requires. Like the amount of work, meetings, and everything else. But I believe when it comes down to the opportunities provided, I see my experience, myself as an individual, being able to empathise with other folks.”

Gumbs said that her background has given her a louder voice that she can use to stand up for the underrepresented groups.

“My background gives me the opportunity, I would say, to stand out in the crowd a little bit,” she said. “That way my voice is different, it’s unique, it’s allowed me to be a little louder in certain situations.”