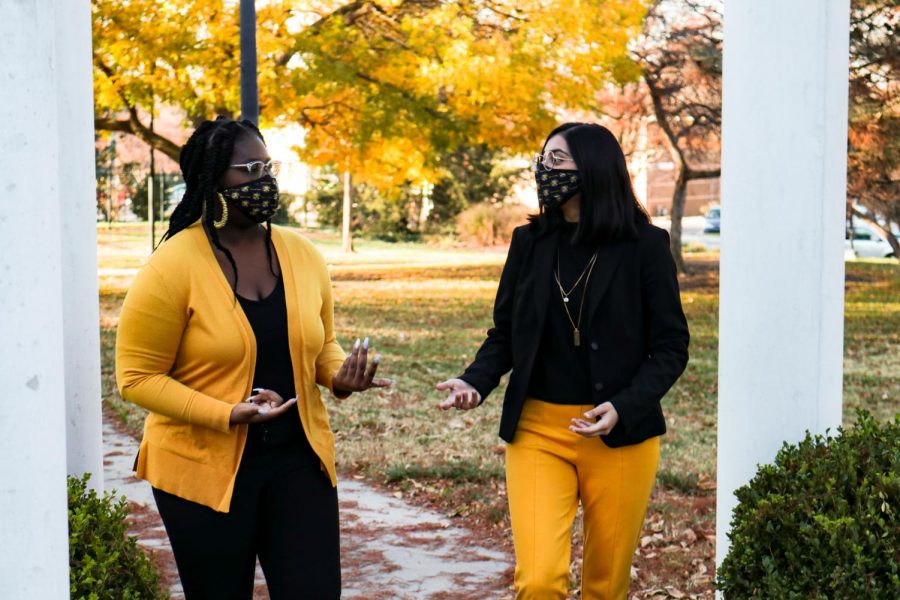 Courtesy of Khan and Gumbs

Rija Khan and Kamilah Gumbs were elected student body president and vice president, respectively, with 95.6% of the vote.

This will be Khan’s second year serving as student body president after first being elected last year with current vice president Mackenzie Haas. She said she is humbled to get another chance to serve.

“The first thing was the feeling of humbleness … it’s very much on the side of people believe the work I did was good that they wanted to see me in this role again, that feeling was the most humbling one,” Khan said.

“Yes, I’m happy, I’m excited— but first and foremost I am humbled to get to do the work I do.”

Khan said that getting to spend more time in office to complete the work her session has started is crucial.

“365 days, that is all I had in my first term, but now the time has doubled … now I have 730 days in office,” Khan said. “I’m ready to move into this next session and expand on the work that has been started to start those new initiatives.”

This will be Gumbs’ first year as vice president. Gumbs said that as an international student, she was even more honored to be elected.

“I take it as an honor because I feel like, it’s really cool especially since I’m not one of your traditional students as an international student,” Gumbs said. “It’s kind of awesome to see that I’ve made it into this position.”

Gumbs said she is excited to use her role as vice president to be a voice for the students who sometimes feel voiceless.

“I’ll be in a lot more meetings, be in a lot more spaces that students aren’t usually in and I’m excited to be that representative in those different meetings … and just doing the work that needs to be done,” Gumbs said.

Before Khan and Gumbs launched their campaign they spent a large amount of time listing issues the student body faced. Khan said that through that process, her and Gumbs became even more excited about the work they hoped to do.

“When we were writing these down, I still remember the initial process of talking about issues and talking about how frustrated we were,” Khan said. “We have many goals we ended up with, but when we wrote down the solutions … we became even more passionate about every single one.”

Gumbs said she will be a vice president that is always available for discussions with the student body.

“I will always be a champion for them, even if they see me in person, even if I don’t recognize them, please don’t hesitate to contact me,” Gumbs said. “I’m always willing to have conversations with anyone about any issue. Of course, we’ll try to work to make it better because the end goal is to make sure WSU is better for all students.”

Khan said that the student government office will remain open to any student.