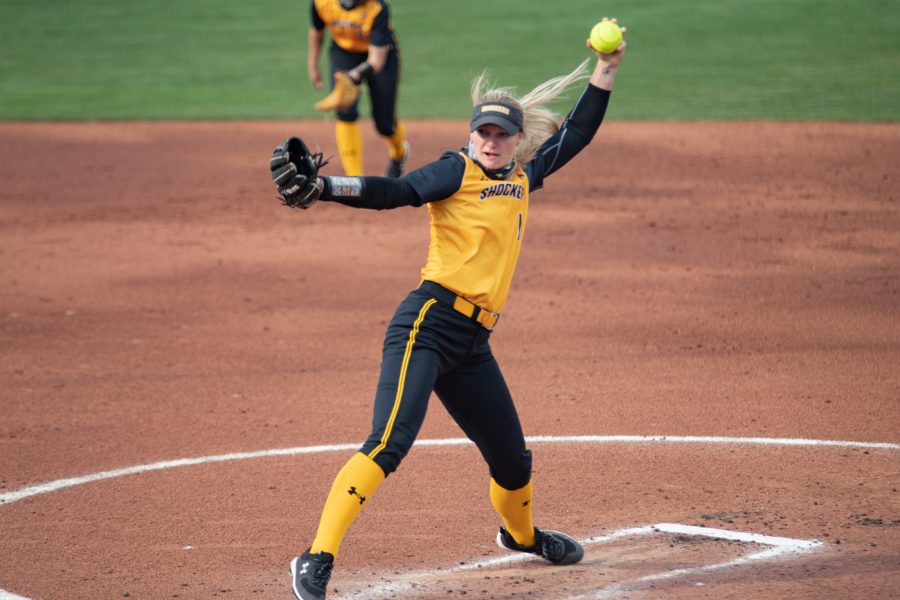 Wichita State senior Bailey Lange pitches during the game against Houston at Wilkins Stadium on April 9, 2021.

The Wichita State women’s softball team clinched another conference series sweep against Houston this weekend. Their overall record is 28-5 and they are 11-1 in conference play.

The Shockers got close to breaking the single season home run record in game one of the doubleheader on Friday as they went on to defeat the Cougars, 13-5 with a run-rule. The Shockers currently have a team combined 59 home runs. Senior catcher Madison Perrigan got her first grand slam of the season in game one. Sophomore designated hitter Lauren Mills hit a grand slam as well.

Despite Houston scoring the first run of the game in the opening frame, the Shockers responded quickly in the bottom of the first with a single from freshman right fielder Addison Barnard and an RBI triple from Perrigan.

Senior pitcher Bailey Lange, started in the circle for the Shockers. She allowed five runs on three hits. She struck out seven batters and had four walks.

In game two of the doubleheader, the Shockers started out hot in the bottom of the 1st. Sophomore shortstop Sydney McKinney started the scoring for the Shockers by scoring on a single. Perrigan finished off the 1st with a solo home run.

The Shockers scored one run in the bottom of the 5th, and three in the 6th to give them the 8-3 victory.

In game three of the series on Saturday, the Shockers won their eight straight game, 11-2.  Perrigan started it off for WSU by scoring on an RBI double. The Shockers scored six runs in the bottom of the 2nd. One of those runs came from a solo home run from McKinney. This gave McKinney two home runs on the day.

Head coach Kristi Bredbenner had a lot of positive things to say after starting out 3-0 in a conference series.

“We’ve done a great job of battling back after some of those misses. I think hitting wise we are doing a great job of executing our plan and barreling  balls up,” Bredbenner said.  That’s probably the thing that I feel best about between everything, our offense is just exploding. If you look at it, our defense has just been great .. made some great plays.”

The Shockers scored four runs in the bottom of the 5th to set the run-rule. Barnard hit a home run in the bottom 5th. Junior first baseman Neleigh Herring hit a walk-off two-run shot to seal the win.

Lange got the start again in the circle. She allowed two runs on three hits and struck out five.

In the final game of the series, the Shockers continued with good offensive play at the plate, with a 10-7 win.

Senior center fielder Bailee Nickerson hit a grand slam in the bottom of the 1st, to give the Shockers a 4-0 lead.

Nickerson said the environment of the team this year is fun to play with, and leads to them being successful.

“We are so in the groove,” Nickerson said. “It’s really fun to play with a team that’s ready to go all the time.”

Houston tied the game up by the top of the 5th. However, the Shockers scored four runs in the bottom of the 5th. WSU scored two home runs in the 5th.  Mills, and senior second baseman Kaylee Huecker both had a home run each.

Lange started for the Shockers in the circle. She threw for 4.0 innings. Lange allowed three runs on five hits, and struck out two.

Bredbenner said that she is glad to see her team doing so well to starting off hot early in the season, and hopes they are still in a groove.

“You hope so,” Bredbenner said. “We worried in this season that we were peaking a little too soon.”

The Shockers will play the University of Missouri Kansas City in a double – header on Tuesday, April 13 at Wilkins Stadium. The first game will start at 4 p.m.