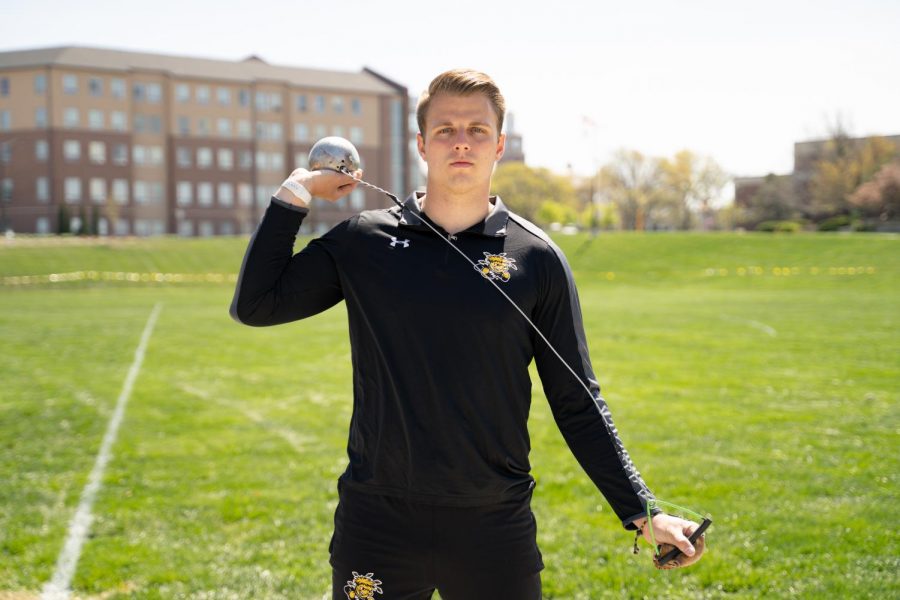 Michael Bryan had lost his roster spot after one season as a walk-on for Wichita State and he didn’t even know it.

Bryan redshirted the year prior and competed in six meets as a walk-on, but WSU no longer had space for him on their roster.

“He was cut without him even knowing but it worked out where we could fit him onto the roster so he kind of got added back on without him really knowing he was off of it,” Assistant Coach John Hetzendorf said. “To go from a guy that was kind of cut from the team to top-five in the NCAA, it’s kind of crazy. I think it’s a good story for people to look to see what’s possible.”

Before Bryan was off WSU’s roster, all he just wanted was an opportunity.

Bryan had just spent two years as a thrower on the Hutchinson Community College Track and Field team and described himself as below average and not getting much better. He was desperate for an opportunity even if it meant no scholarship. After one of his coaches at HCC talked with the Wichita State coaching staff, they decided to take a chance on him.

Bryan got his opportunity as a walk-on for the Shockers.

“It was kind of a situation where I’d love the opportunity to throw for you guys, I understand that I’m not that great,” Bryan said. “You don’t have to give me a scholarship, just as long as I have an opportunity to throw. I could easily tell they weren’t impressed with my form, with how far my throws were going but they took me on as a walk-on.”

Before Bryan arrived on WSU’s campus he was still unsure of his abilities. At one point, he thought about using this possible walk-on opportunity to further his education.

“In all reality, I wasn’t improving at Hutch, so I was like maybe I should start thinking about my future in academics and see what happens if I do come to WSU for track,” Bryan said. “I knew I was pretty average, I really wanted to be really good. I’ve always had an Olympic goal but being an Olympic athlete, you have to be genetically gifted as well.”

During Bryan’s first summer at WSU, he was motivated to seize this opportunity. Bryan’s work ethic eventually caught the eye of Director of Track and Field and Cross Country Steve Rainbolt.

Rainbolt said he remembers seeing Bryan outside his old office and consistently showing up in hopes of improving his craft.

At the end of Bryan’s first season with the Shockers he had a goal of 70-80 meters for the hammer throw. Bryan approached assistant coach John Hetzendorf about what it would take for him to reach that milestone.

“At the end of the first year, I asked him what I needed to do to be a 70-80 meter thrower and he laughed at first saying you’re joking aren’t you,” Bryan said. “I wasn’t joking obviously but he really just said I need to be a little obsessed with it.”

Bryan became obsessed with the sport and stayed committed to his goal throughout the offseason. Bryan continued to pick Hetzendorf’s brain and wanted to know everything he could do to improve.

Hetzendorf would send Bryan PDF files and journal articles to keep him busy.

“It’s important for an athlete to take advantage of a coach’s knowledge, so that’s what I did,” Bryan said. “Coach Dorf is really open with that if he has an athlete that wants to work and really wants to know the sport, he’ll give you everything he has.”

In his senior season at WSU, Bryan’s hard work has paid off. After a nearly two year wait for the outdoor season, Bryan broke the school record for the hammer throw. Bryan threw a personal-best 66.72m/218-11 to take home first place at the Shocker Spring Invitational.

Even after his historic performance, Bryan was back out at the practice field working to get better, despite rain and cold temperatures.

“It was rain and wind and cold and his butt was out there throwing the hammer,” Rainbolt said. “I’m walking around the building and going ‘is that Michael Bryan out there?’ This is right after he set the school record. You’re thinking maybe he’ll take some recovery time. The guy is absolutely on it all the time.

In the weeks that followed, Bryan broke his own school record two different times, finishing in first place in both events.

Hetzendorf said Bryan’s work ethic and motivation have been key to his success now.

Based on Bryan’s constant improvement, Rainbolt has found himself talking about him at every team meeting. He said that Bryan’s story can be a lesson to younger athletes no matter what their situation may look like.

“It’s just unbelievable the amount of work and time and energy that the guy has put into it and it goes to show that if a person is prepared to do what’s necessary to master their craft, they can do it,” Rainbolt said.  “He was nothing special but he is now. It’s an extremely impressive story and I’m really proud of him.”

Bryan’s latest personal best mark of 70.15 meters puts him top-six in the country, which could qualify him as an All-American. That mark should also be good enough for Olympic trials later this summer.

“(Coach Hetzendorf) wants me to get to 72-75 (meters), because that’ll settle it. My goal is to get through the Olympic trials and place top-15. That would be an astonishing goal for me. None of my immediate family had ever gone to college, yet alone be a college athlete.”