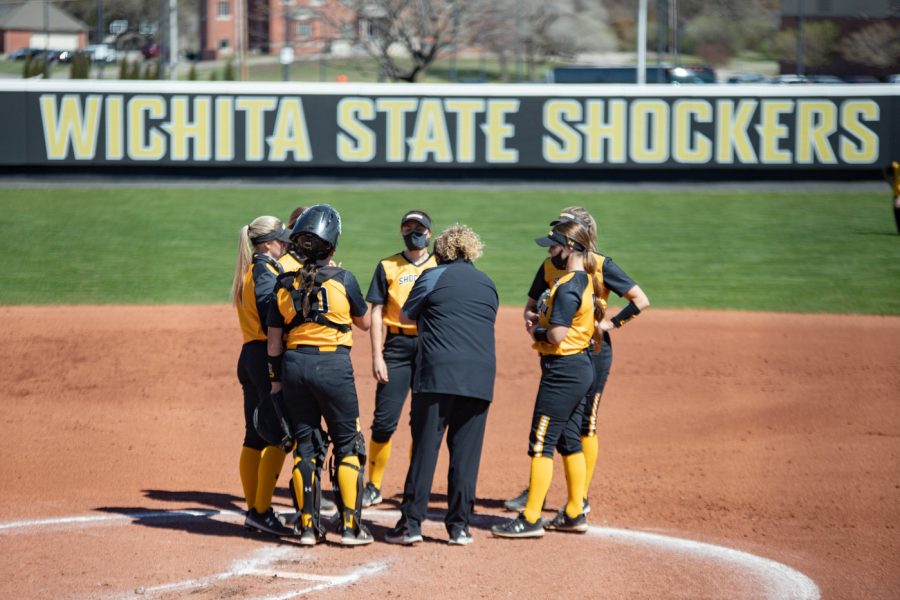 Wichita State players talks with head coach Kristi Bredbenner during the game against ECU at Wilkins Stadium on Mar. 28, 2021.

A lot happened for the Wichita State women’s softball team on Tuesday.

Head Coach Kristi Bredbenner collected her 600th win, freshman right fielder Addison Barnard broke the single season home run record for Wichita State. To top it all off, senior third baseman Ryleigh Buck hit a solo home run to in the bottom of the 6th inning to seal the win for The Shockers.

“I felt like my at bat with her beforehand, she was living on the outside corner and I wasn’t real happy with how it went the first time,” Buck said. I was just sitting out looking for that pitch I like to hit and  then I just went with it.”

Bredbenner said she is excited for all the records that were set during and after the game. However, she is focused on having her team be prepared for the things they can control during their season.

“Just like any other win,” Bredbenner said. “I’m excited for them that they are breaking records and making history but you know that stuff to me… you can’t control it and we can control how hard we come in every single day and getting prepared for our opponents and just taking it one game at a time. It doesn’t matter if you are ranked in the top 25 or not, the team you are playing against is ready to beat you every single day so we have to be ready to beat them.”

The Shockers beat the University of Missouri Kansas City 4-3 on Tuesday, improving their overall record to 29-5. They are also 11-1 in conference play.

Barnard started things off for the Shockers with a homer to right field. She was excited about breaking the single season home run record after her homer. However, she is excited to move on to their next opponents that the team will face.

“I’ll probably think about it a little today and it’s pretty cool but I’ll move on, and go to next weekend,” Barnard said. “It was just a really outside pitch and I was kind of expecting it because she had been going out the whole count, and so I was really early but I got my hands out there and just stayed through.”

To finish the inning out, junior first baseman Neleigh Herring scored a run from an RBI single from senior center fielder Bailee Nickerson. UMKC scored a run in the top of the 2nd to make it a 1-2 game. In the bottom of the 4th inning, the Shockers got their second homer of the game from Nickerson.

By the top of the 5th, UMKC tied the game 3-3. Despite their efforts to make a comeback, the Shockers pulled away with the win from Buck’s homer in the bottom of the 6th.

Junior pitcher Caitlin Bingham pitched 6.0 innings, allowing three hits on nine runs. She walked zero batters and struck out four. Senior pitcher Bailey Lange came in  and collected the save in the 7th.

The Shockers will play another conference series at the University of Central Florida starting on Friday. This matchup is predicted to be one of the best matchups the Shockers will have all season. UCF is currently ranked No. 23 in the nation according to NCAA Softball. The Shockers sit a few steps below them at No. 25 in the nation.

“This will be a fun one this weekend,” Bredbenner said. “It’ll be great to see how the outcome is.  They’ve got great pitching, great defense, good hitting team, and you know it’s going to be a dog fight. I think it was a nice win for us today to kind of shake off a little rust and soreness from the weekend.”