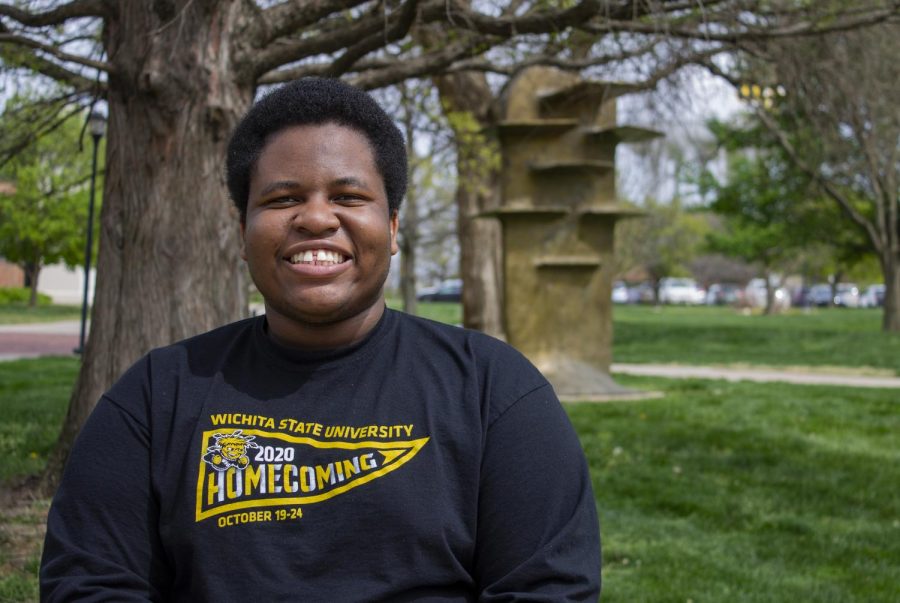 Wichita State Junior Omarian Brantley poses for a photo. This year Brantley was elected the president of the Black Student Union. He also currently works as an intern in the Office of Diversity and Inclusion, an underserved senator in Student Government and is an RA in housing.

Brantley, a social work major, transferred to WSU from Pittsburgh State and was offered a role as an intern in the office of admissions. He accidentally accepted the position over the phone.

“The person I was on the phone with was telling me there was this opportunity as a diversity intern, and I was thinking it was for the Office of Diversity and Inclusion, and I accepted the job without really knowing what position I was getting into,” Brantley said.

Although he enjoyed the people he worked with and mentored him at the office of admissions, he wanted to become more involved in advocating for diversity and inclusion on Wichita State’s campus. This drive began during an incident at his past school.

“At my previous school I was also involved in their Office of Student Diversity and there was an incident where I walked out of the community bathrooms and saw a group of white students and they yelled the n word at me,” Brantley said.

Brantley said that even though the situation was resolved, it led him to feel the need to transfer. He said the groundwork laid by his mentors there inspired him to continue to be a leader and be an advocate for positive change.

This year Brantley was elected the president of the Black Student Union. He also currently works as an intern in the Office of Diversity and inclusion, an underserved senator in Student Government and is an RA in housing. Brantley says all of these positions he holds intersect because at the end of the day, he said he wants to create a comfortable environment for all students, especially Black students.

“Me and Ms. Danielle Johnson started this program called ‘Black Excellence’ or BE which inspires black students to be unapologetically black, feel comfortable and safe on campus,” Brantley said.

Brantley explained how he was inspired by the University of Iowa and their program “Young, Gifted, and Black” which is a program that surrounds Black students with fellow Black students and resources to exceed and learn from each other in an environment that feels proudly Black. Brantley and Johnson drew inspiration from this when creating Black Excellence and now has a branch of a Living-Learning Community or LLC geared toward Black freshmen. Students can apply to live on the floor and Black Excellence will fully start up next semester.

“We want to ensure these students are successful in their academic, professional and social lives because too often Black students slip through the cracks and we want to make sure they graduate, are prepared for the world and also create a community together,” Brantley said.

Brantley said that he uses every role he has to enhance the Black experience at WSU.

“I draw a lot of inspirations from my past experiences and it has pushed me to go as far as to make it my mission to change the Black experience for students here at Wichita,” Brantley said.

“Being unapologetically Black to me means to proudly show up and represent for Black spaces and let it be known,” Brantley said. “It is all about just passion, passion for your people and culture and make sure you are doing what is right.”

As an RA, Brantley individually painted and hung up pictures of Black artists around his floor with information about each one to educate as well as decorate. Throughout his floor artists like Prince, MC Lyte, Aretha Franklin, and Erykah Badu all hang proudly with information about their music. Brantley himself is a soul and R&B enthusiast and loves to share music with others. Although people might not be ready for his “hot takes” about Janet Jackson being superior to Michael Jackson.

“I chose the theme of R&B and soul and hung up paintings of Black icons because not only do I want people to learn something, but in all of my roles it is about representation and it is a blessing to proudly represent my people in whatever way I can,” Brantley said.

Brantley said his focus has always been to not only make connections but to also be a representative for all Black students.

“I think it is important for people to know, no matter what my title is or where I am at on campus or whatever I am doing, I am going to be representing Black people, and myself, proudly,” Brantley said.