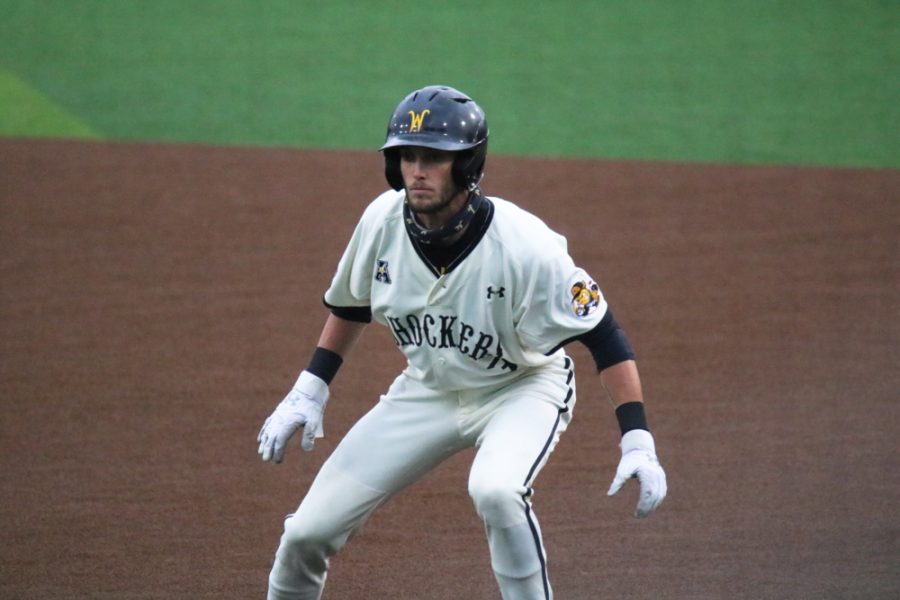 Wichita State freshman, Cooper Elliot runs toward the ball during a game against Kansas University at Eck Stadium on March 23.

The Wichita State Shocker baseball team traveled down to New Orleans, La. to play against the Tulane Green Wave for an American Athletic Conference series. The Shockers were swept by the Green Wave in the series, losing three games to Tulane on the weekend. Game four of the series was cancelled due to weather.

In game one, Preston Snavely received the start on the mound for the Shockers. Snavely struggled, tossing 4 ⅔ innings pitched, giving up four earned runs off of six hits. Snavely recorded three strikeouts and three walks in a losing effort.

Ryan Stuempfig and LJ McDonough threw in relief for the Shockers.

The Shocker offense hit seven-for-33 at the plate as a team. Wichita State struck out 12 times. Jack Sigrist hit his third triple of the season in the loss.

A five-run fifth inning propelled the Green Wave to victory. Tulane won game one of this series 6-3.

Liam Eddy made his ninth start of the 2021 campaign in game two on Friday. Eddy recorded seven innings of work, allowing three runs (only one earned) and striking out seven and walking one.

Aaron Bechtel came on to pitch in relief in the bottom of the eighth inning for the Shockers. The Wichita native pitched a scoreless frame of baseball, allowing no hits and striking out one.

Sunday’s series finale featured a back-and-forth affair between Wichita State and Tulane. This game started on Saturday, however due to weather was postponed to continue on Sunday. The Shockers held a 1-0 lead when the game resumed.

Spencer Hynes threw 3 ⅓ innings, striking out three hitters, walking two and allowing five runs. The Shockers used four pitchers out of their bullpen and struggled to be effective. The bullpen combined for four walks and one strikeout.

The Shocker offense recorded back-to-back innings with two runs. Wichita State scored two runs in the fifth and sixth innings, which trimmed the Tulane lead down to one run, making the score 7-6 through six innings.

Tulane added a run in the bottom half of the seventh inning. Green Wave first baseman Walker Burchfield hit a RBI single through the left side to give Tulane an 8-6 lead.

The Shockers started off the top of the ninth on a high note. Paxton Wallace hit a leadoff double to right field. Moments later, Hunter Gibson would hit a single through the right side, giving the Shockers runners on first and third with nobody out.

Moments later, Ross Cadena would reach base due to an error. The Shockers had the game-tying run at second base and the go-ahead run at first. Couper Cornblum grounded into a 6-4-3 double play to end the game.

After being winners of seven straight, the Shockers are currently on a three-game losing streak.

Next up, Wichita State will play a four-game series against Cincinnati at UC Baseball Stadium on April 23-25.

The Bearcats have a 15-17 overall record and a 4-7 record in the AAC. Cincinnati’s most noteworthy win was a 13-12 victory in ten innings over No. 5 Louisville on March 30.