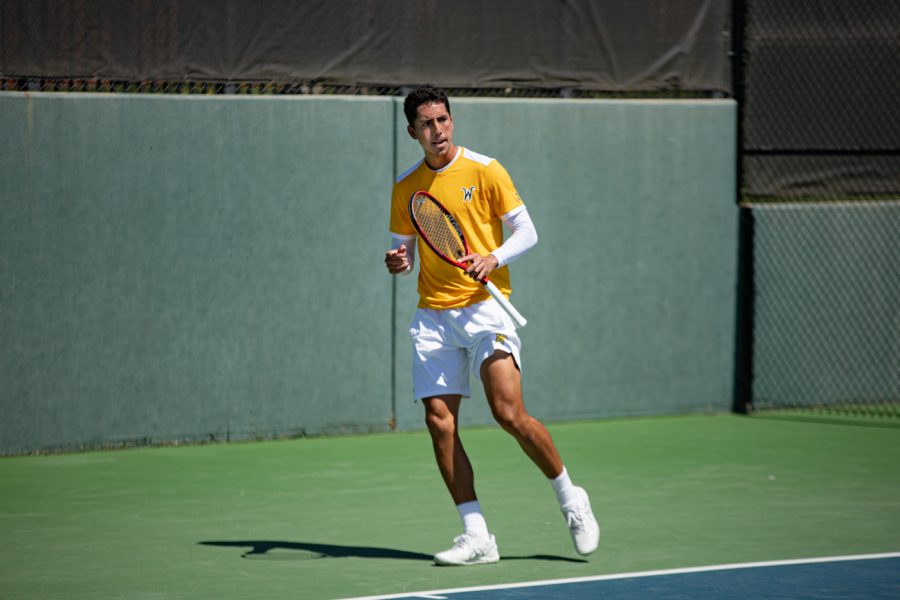 Wichita State Redshirt Senior Murkel Dellien celebrates during the game against Pepperdine at the Coleman Tennis Complex on April 4, 2021.

During a historic men’s tennis season at Wichita State, two seniors have been integral in the team’s success.

Murkel Dellien and Marius Frosa were a part of Head Coach Danny Bryan’s first recruiting class at WSU. After years of building, this season has seen the Shockers rise as high as No. 28 in the rankings, along with a possible return to the NCAA Tournament.

Frosa, a Galati, Romania native, has played the last five seasons with the Shockers. Frosa possessed a record of 112-76 in singles and doubles matches entering this season.

Bryan said Frosa had a difficult transition to WSU as he struggled with a negative mindset during matches.

“He would get really down on himself, he’d be really tough on himself. We definitely went through some tough times with him,” Bryan said. “A couple years ago he started to see things differently. I think the stuff at the beginning was the pressure he was putting on himself and he didn’t know how to handle it yet. He was willing to make those changes with his mentality.”

Frosa said that with the season coming to the end, it is emotional knowing his time in Wichita is coming to a close.

“Of course it’s emotional because we know we’ll be finishing something and we know we’re really connected to the guys,” Frosa said. “Even if it’s our senior day, we still know we have to play in the NCAAs and the conference. It’s emotional, it’s sad but on the other side, I’m happy for the person I’ve become now and I’m focused on the goals that we have in the future.”

Dellien is also a five-year member of the program, arriving from Trinidad, Bolivia. Dellien’s senior season has been full of success, picking up three consecutive ranked wins in singles.

Dellien said he had to quarantine for 20 days over the summer which impacted his mentality out of the gates this season. But after a match against Texas Tech, he saw his season start trending in the right direction.

“I couldn’t find my game on the court and I was really struggling mentally,” Dellien said. “After that, I came back stronger to practice and with the right mentality. Everything started with the first match in Texas against Texas Tech. It was the start of building my confidence then, it was really important for me. Now, that match against Pepperdine was special but at the same time was an extra push for me to believe that I can be that kind of player.”

Bryan said after Dellien entered in some tournaments by himself in the fall, he could see a different mindset from him.

“He had taken another step, he had matured, so I’m not surprised now,” Bryan said. “What was really cool was at the very beginning of last semester, he went and played some tournaments on his own and he didn’t have great results. We would meet individually after that with him and there was no doubt in his mind that he was on the right path.”

For the past five seasons Dellien and Frosa have been paired together in doubles and in 2019 they were named ITA All-Americans. The pair was also awarded with an at-large bid to the NCAA Tournament and became the second Shocker duo to advance to the quarterfinals in the tournament.

Dellien said that their chemistry off the court has been key in their success together in doubles.

“Throughout the years we gained a lot of experience and that turned us into better players in doubles,” Dellien said. “The chemistry that we have on and off the court is what brings us to the success that we have.”

The Shockers currently hold a 14-7 record on the season and are the No. 32 team in the country.

Frosa said that the team’s belief in one another has been the biggest change in this season’s success.

“The main part is that we trust each other,” Frosa said. “When we go onto the court, we know that we want to win that match. Everybody goes there for a goal and I feel like that’s what we did well every match. Even if some of us lose but most of us win, that’s the main thing.”