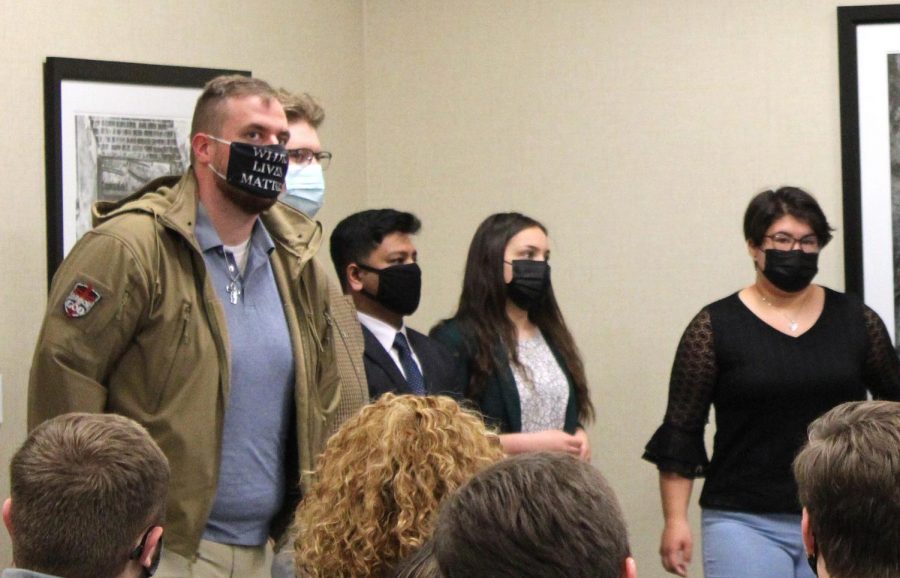 A Student Government Association senator who sparked controversy yesterday for wearing a “white lives matter” mask at the SGA inauguration ceremony has a history of gun charges and criminal threats, including a 2015 arrest for planning to storm a courthouse to disrupt a trial.

Samuel McCrory, a junior in electrical engineering, was sworn in yesterday as a returning adult senator. When The Sunflower posted photos from the swearing-in event, students responded on social media with concerns regarding the mask. Student government would not immediately identify the senator. McCrory confirmed in a telephone interview with The Sunflower that he was the senator in the mask.

“There shouldn’t be anything wrong with advocating for white lives,” McCrory said. “It’s ridiculous that I have to justify that.”

“The very fact that people had an issue with it says something about them. That they have no interest in racial equality or anything like that despite their claims.”

Earlier this month, McCrory was elected to the position as a write-in candidate with only one vote.

McCrory said one reason he decided to run for office was because the senate seats are disproportionate to the student body. The senate is made up of college-specific, at-large, and special constituency senator seats.

“There’s also seats that go to underserved, which basically means you have to be some kind of protected class to run for those, but you can be a member of that protected class and still run for the college seats,” McCrory said. “So you have equal opportunity.”

McCrory has a history of controversy.

According to an article published by the Wichita Eagle, McCrory was arrested in 2015 for suggesting an attack on the Sedgwick County courthouse in a Facebook post and pleaded guilty. In the post, he asked if it was “out of line to storm the courthouse” and said that the “only way to defend yourself from a cop is to kill a cop.”

McCrory said he had no terroristic intent behind the Facebook post, but that the law in Kansas is broad.

“It was something from Facebook that was probably unwise,” McCrory said. “It was taken out of context. It was reported by people who had political motivations against me for a very long time. I saw the law was backed against me with the way it was written and I chose to plea out.”

McCrory also had a misdemeanor battery in 2004 and 2005 when he was 11 and 12. At 15, he pleaded guilty to aggravated battery in December 2005. His mother was the victim, according to the Eagle. In January and March of 2008 he was charged for assaults against his mother at 14. He had a juvenile felony conviction from Rice County in 2008.

In 2014, he was seen multiple times toting a rifle, handgun, and an ax tucked into his waistband at protests and other events around Wichita.