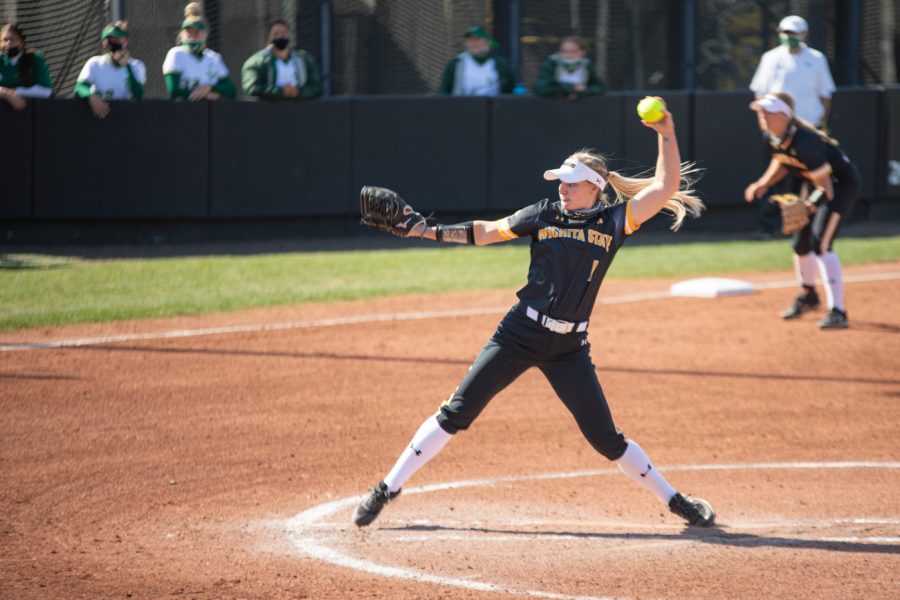 The Wichita State Women’s Softball team went 1-3 in their series against the University of South Florida. This is their first conference series they have lost this season. Their overall record is 33-9-1. Their conference record sits at 15-4-1.

However, the Shockers responded in the bottom of the 6th. Sophomore shortstop Sydney McKinney singled to first base and then freshman right fielder Addison Barnard delivered an RBI triple, leading McKinney to score. Despite other chances to come back, this would be the Shockers only run scored in game one.

Senior pitcher Bailey Lange got the start in the circle for the Shockers. She allowed five hits and two runs.

On Saturday, April 24 the Shockers split in their double-header with USF. In game two of the series, the Shockers run-ruled USF. The final score was 14-3.

The Shockers started out in the lead early, when senior catcher Madison Perrigan homered to left center. They added one more run in the inning to make it a 2-0 game.

In the bottom of the 4th, freshman left fielder Bailey Urban hit her first home run of the season.

Freshman designated hitter Camryn Compton then homered to center field. The Shockers scored a total of three runs in the 4th. In the top of the 5th, USF added on three more runs.

Junior pitcher Caitlin Bingham started in the circle for the Shockers. She pitched 4.0 innings. She allowed zero runs and two hits, while striking out three batters. Senior pitcher Hailey Martinez finished the game off in the top of the 5th.

Lange started in the circle for the Shockers. She allowed three runs on four hits.

Perrigan said she was frustrated for her and her team that they did not produce an offensive threat in their second game of their double-header on Saturday.

“It’s hard to score fourteen runs and then you know the next game will come out and you know what your offense can do and whenever it doesn’t produce it is frustrating,” Perrigan said. “It’s all about our offense making the adjustments because we know we can hit any type of pitching, any pitcher that’s in the circle.”

On Sunday, April 25 the Shockers lost to USF 8-1. The Shockers scored in the bottom of the 1st on a triple from McKinney. USF tied the game up in the top of the 3rd.

After a scoreless 4th inning, USF put up seven runs in the top of the 5th. The rest of the game remained scoreless.

Bingham started for the Shockers and allowed seven runs on nine hits, and one walk. She pitched for 4.2 innings. Junior pitcher Erin McDonald finished the game off. She struck out five batters in the 2.1 innings that she pitched.

Head coach Kristi Bredbenner mentioned the play of USF pitcher Georgina Corrick and her ability to challenge the Shockers at the plate this weekend.

“She’s got great velocity, great command, and then she has a devastating changeup,” Bredbenner said. “You know we’re watching there and she’s throwing hard in on your hands, and you’ve got to get out in front and turn on that pitch but then she throws you in the same exact spot you know something that’s 15 mph slower, and you know that’s tough to hit.”

The Shockers will play Oklahoma State University at home on Tuesday, April 27. They will then play at Tulsa later in the week. Coach Bredbenner said the team’s focus will be to test the defense as their schedule continues to be tough.

“We have a really tough schedule here on the back end,” Bredbenner said. “You know we’ve got to figure out ways to compete. That’s going to have to be our focus heading into next week is to test the defense and you know make it a little more competitive up at the plate.”