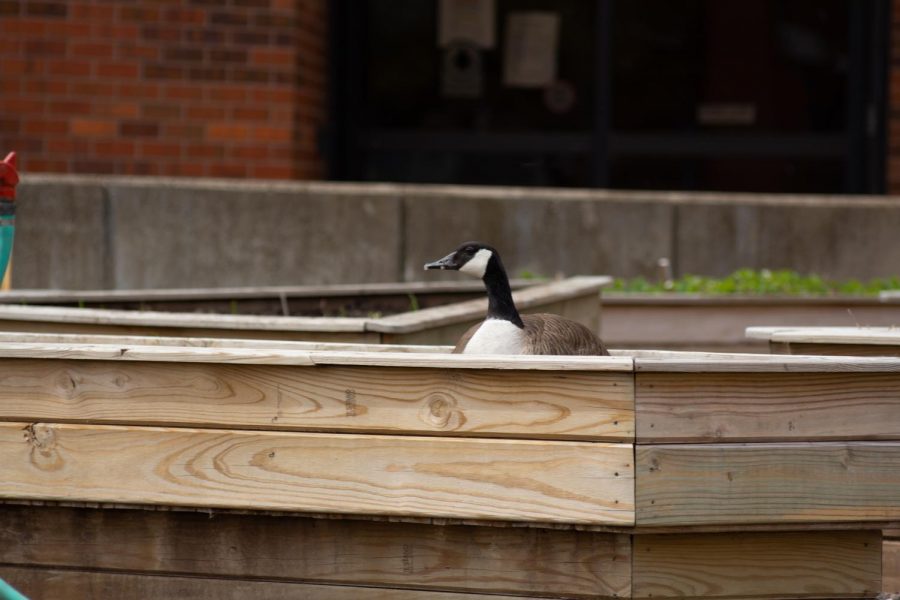 A goose watches members of the Green Group plant at the WSU Community Garden on Wednesday during their Earth Day Event.

A goose nest was removed from the community garden last week. According to WSU’s green group, the nest had been there for roughly two weeks.

“We didn’t want to move her because that’s kind of all the green group does— that wildlife is protected and that we’re investing in, you know, green initiatives,” Alice Fitzgerald, WSU’s Green Group president, said. “So we were just kind of working around her.”

Fitzgerald said that the removal of the nest came after no notice to the garden or the group.

“We have an art class that’s painting the bins for us. So they were painting, they left, and then someone came back and they were like, ‘Oh my gosh the goose is gone, and the nest is gone,’” Fitzgerald said. “And then the goose came back, and the goose was just kind of looking around like, ‘Where did my nest go, where did my babies go?’”

The group then called the physical plant to ask about the removal, when they were told that they decided to remove the nest after someone filed a complaint.

“It’s just really sad, because we were kind of invested in how she was doing,” Fitzgerald said.

Fitzgerald said that geese and goose nests are protected by law, and in order to remove them properties have to have the proper licensing and certification.

Facilities told The Sunflower that they got the certification needed to remove the nest.

“It’s done by goose troopers and that’s who handles that, it was handled in its proper way,” Facilities services said. “Yes, we do have a license for that.”