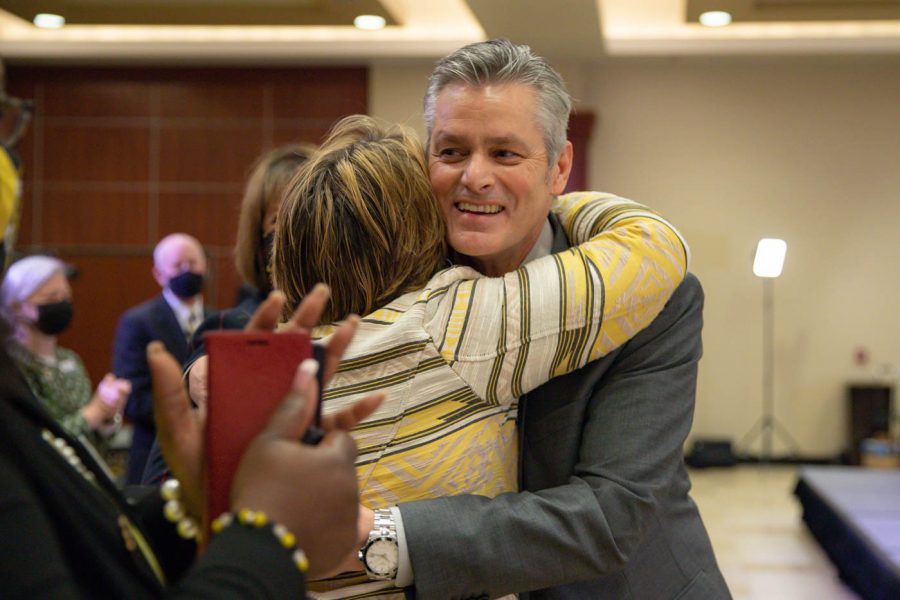 The Kansas Board of Regents announced current Interim President Rick Muma will serve as the 15th president of Wichita State University Thursday, May 16.

Muma will follow Jay Golden, the university’s 14th president who resigned in September 2020 after only nine months on the job.

“Our university mission is to be an essential, educational, cultural and economic driver for Kansas and greater public good,” Muma said during his acceptance speech.

The presidential search was closed — meaning none of the candidates’ names have been released to the public and candidates did not meet with anyone from outside the committee. The committee was chaired by Wichita Attorney and WSU Foundation Board of Directors Chair Dan Peare. The committee was composed of 22 members, three of which were student representatives.

Muma has been at the university since 1994, when he was hired as a Physician’s Assistant Program professor. He became the associate vice president for strategic enrollment management in 2016 and was promoted to provost in 2018.

There is still a lot of mystery around Golden’s sudden resignation. Muma said that while he doesn’t know the reasons behind Golden’s departure, he said he has used that situation to remind the community what a university really is.

“I don’t know what the reasoning was behind that, I tried to explain to all the constituencies that the university is not built on one person. It’s a collective effort.”

When asked in September about his interest in the permanent presidency during a Faculty Senate meeting, Muma said he was not a candidate for the position.

Muma said at the time of that meeting, he did not see himself in the president role.

“I was not a candidate at the time, and that’s how I interpreted it,” Muma said. “I wasn’t actually thinking at the time that this was my ultimate goal but there’s been a lot of water under the bridge since then, and I felt like that I had the skills, the abilities and the timing.”

Muma will be the first openly gay president of WSU.

An advocate for the LGBT population during his time at WSU, with his husband, Muma established an equality scholarship for LGBT individuals.

“I think it’s historic, I think it’s important for Kansas,” Muma said. “I think it’ll say a lot of things to a lot of different people in different ways about inclusions diversity and just the way our society is.

Muma said in his first days of the permanent presidency, his goal is to focus on listening to the community.

“Next week we have commencement, so that’s the number one thing I’ll be focusing on,” Muma said. “Then I’m going to spend some time listening to people, and see what they want to do and want us to focus on … There’s an opportunity for me to hear.”

Muma plans to hold listening sessions before people return for the fall semester.

“Making sure that I’m out there meeting with businesses and community leaders and making sure that they feel good about where we are as an institution and how we are going forward currently,” Muma said.

Muma will begin his presidency still in the midst of the COVID-19 pandemic. He said he feels confident that the university responded to the crisis effectively.

“I feel really good where we are as an institution in that regard, we created a safe environment for our students over this last year and a half,” Muma said. “I see that this fall we will have a somewhat normal return as more people get vaccinated.”

Muma said one of the main problems he wants to address on campus is the freedom of speech debate.

“The freedom of expression issue is an issue not just at Wichita State, but also an issue across the country,” Muma said. “(I am) making sure our student body, faculty and staff are knowledgable about what it means to live in a free society and making sure we preserve that.”