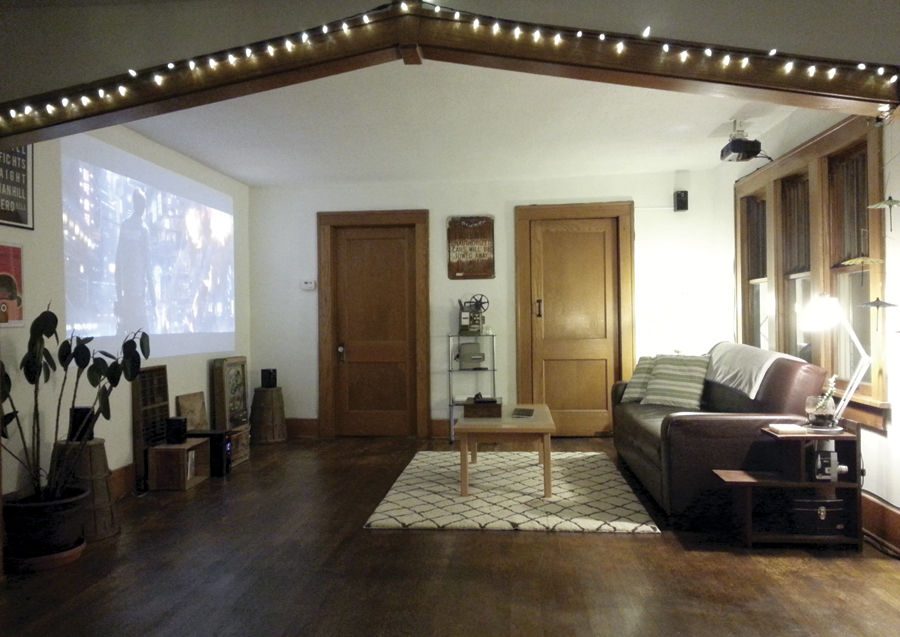 Although it takes research, time and energy to set up, mounting a projector to the ceiling and running the cords is an affordable and unobtrusive alternative to a television.

Robert Frost is a damn good poet. He shares thoughts so clearly and beautifully that you can’t help but think, “I could have written that.” He hits the nail right on the head — with the hammer. He’s the hammer. This paragraph is an example of something Robert Frost would never write.

Here’s something he did write:

“Two roads diverged in a yellow wood, and sorry I could not travel both — and be one traveler, long I stood — and looked down one as far as I could, to where it bent in the undergrowth. Then took the other, as just as fair — and having perhaps the better claim, because it was grassy and wanted wear.”

My mom, and Elliott School teacher, Madeline McCullough, arms herself with the term “digital native.” The words crouch on the tip of her tongue, ready to pounce at the first sight of unfamiliarity with anything digital.

“You’re a digital native, Jess. You were born into this. You understand it. I need you to come over and fix it for me,” — something she often says — where “it” can be anything from troubleshooting computer issues to finding her TV remote.

I’m happy to do it, because she’s my mom. But it irritates me at the same time. I hate that mindset: the easy-to-quit mindset. Just because you don’t understand something doesn’t mean you can’t understand it.

I’m also not a fan of the term “digital native.” It suggests that I was born knowing how technology works. Sorry mom, I have to figure it out, snip-by-snip, just like everyone else.

My roommate recently moved out, and I decided I want a larger TV in my living room. There’s a reason people buy TVs. You buy it, take it home, plug it in and you’re done.

That sounds boring to me. I’ve gone against the grain my entire life. When I was 13, I secretly hooked up cable in my bedroom. I’ve been a vegetarian, living in Kansas, for 10 years. I’ve built my own computer by hand, fixed my own washing machine and painted my own bathroom. So I’m not about to take the easy way out and just buy a TV.

I did the research and bought a 3D-capable, eco-friendly HD projector. I also bought a Bluetooth-enabled surround sound system, a ceiling mount for the projector, 3D glasses, HMDI and audio cables and converters to plug HDMI cables into my laptop and tablet.

I mounted the projector to the ceiling, adjusted the picture settings and arranged the speakers. I connected my PC to the speakers through Bluetooth. However, sound would occasionally glitch, which is OK for music, but distracting for movies. To solve this problem, I spliced 200 feet of audio cable to my speaker wires, mounted the speakers to the walls exactly where I wanted them and fastened the wires along baseboards and doorframes to stealthily run them from one side of my living room to the other, hardwiring the audio directly into my computer.

I spent $700 total on the project. That much money could have landed me a quality, 55-inch TV.

However, here I now sit with a 10-foot display flat against my white living room wall. It disappears when I turn it off — most people don’t even realize I have a TV. The picture is 1080p, plenty bright and 3D-capable. It has surround-sound that doubles as an audio system for music — friends can DJ wirelessly from their phones.

The project has been painstaking. I’ve invested time, money and energy. But I’ve also learned so much — increasing my digital nativity in my mother’s eyes. And I got a huge bang for my buck — all because I took the road less traveled by.