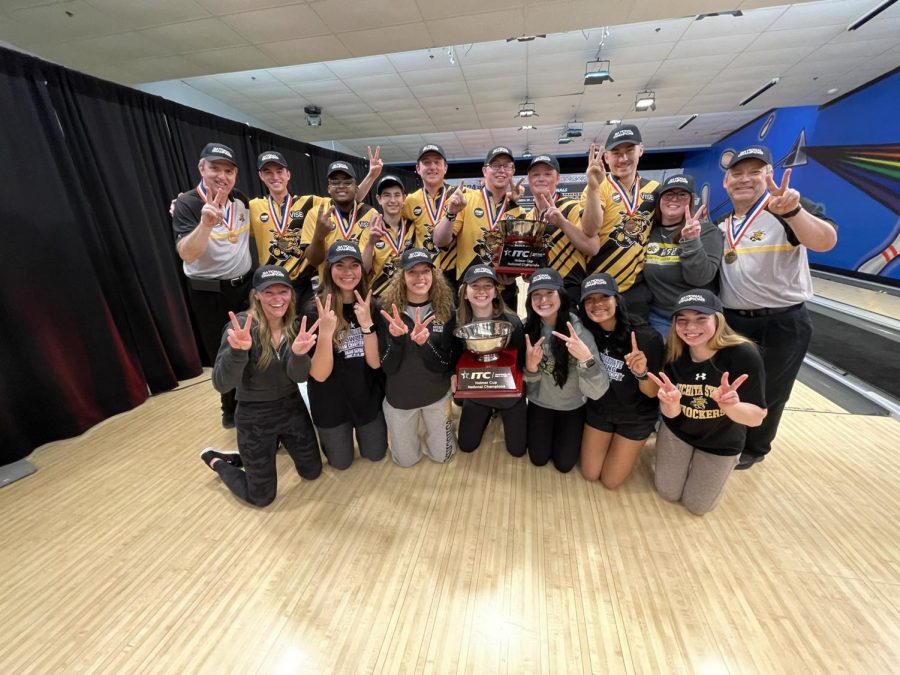 The Wichita State Bowling program collected two national championships victories on Saturday at the Intercollegiate Team Championships, with the men’s and women’s teams both picking up wins.

The sweep from WSU is the first by a program since 2012 and is the third time it’s happened in Shocker history. The women’s victory was their 10th all-time and the men’s win was their 12th. Both marks are the most from any college program nationwide.

“It’s a lot of emotion carried over from all the years of the kids that have been through the program that have been close and never got that last win,” Director of Shocker Bowling Mark Lewis said.

Because last season got canceled unexpectedly due to COVID-19, the program was able to compete in the national championships after a one year wait.

Lewis said it was special for WSU to win this year especially for all the seniors that were unable to finish their seasons last year.

“At the time, both the men’s and women’s teams were leading all the rankings and ranked in the coaches poll and the media poll, ranked No. 1 in the country, headed into that sectional event with a great chance to do what we did this weekend,” Lewis said. “It almost seems like this could’ve been back-to-back for both teams because they were primed, right on the cusp.”

Those setbacks carried over to this year as the bowling season was delayed until the spring. The season was shortened even further with a later start date of Feb. 1 due to Wichita State’s late start to the semester.

In hopes of staying healthy and having enough points to qualify for the championship event, the Shockers practiced in groups of two for the opportunity to compete this weekend.

“We felt that it was such a challenge and it was hard,” Lewis said. “We wanted to be together, wanted to have the interaction, wanted to do all that and we’re just holding the reins back. Let’s be patient, let’s get through this so we have a chance and we don’t have something crazy happen and they did that. It was tough on them but they did that.”

In the women’s final against North Carolina A&T, the Shockers won the title in dramatic fashion. Both teams exchanged victories in the first four games, setting up excitement for the decisive fifth game. Junior Madison Janack, who was recently named National Collegiate Bowling Coaches Association Most Valuable Player, delivered three strikes in the 10th frame to secure WSU the 247-217 win and the national championship.

Lewis said that Janack’s performance this season has been remarkable especially with all the setbacks she and the rest of the team has faced.

It’s a strange setting, there’s no fans, so unique, it’s just the competitors and the tournament officials and it’s so quiet and to not get ahead of herself, not think about what if, and just focus on what she needs to do, stay under control and she just threw so many great shots. She was just amazing, absolutely amazing.”

On the men’s side, they faced adversity shortly before they reached the final. After dropping their game to Emmanuel earlier in the tournament, the Shockers defeated them in Friday’s final round to force an additional early morning game on Saturday at 7 a.m. The Shockers would go on to defeat Emmanuel in that early morning matchup, ultimately advancing to the championship.

Lewis said that it was a difficult challenge for the Shockers to face the same opponent three straight times.

“To go through that battle, it’s so hard to do,” Lewis said. “It’s tough like that in any sport to beat a team multiple times in succession and you’ve already been beaten by them once so you’ve got to fight through that. They really did and they fought through that to get to the championship match.”

The men’s final also came down to the decisive fifth game against St. Ambrose. The first four games featured low scoring outputs from both sides and the teams exchanging victories. In Game 5, the Shockers started with three consecutive strikes and maintained that advantage throughout as they won the game and title, with a 188-146 win.

Lewis said that both teams did a great job of not letting the pressure get to them in those decisive fifth games.

“All the pressure is on and those guys did a great job of working together, it was really fun to see how they did that, handled that. You see all that emotion, all that energy that’s going to come out in that championship match. Just a lot of fun.”