Shockers move into third place with series victory over UCF 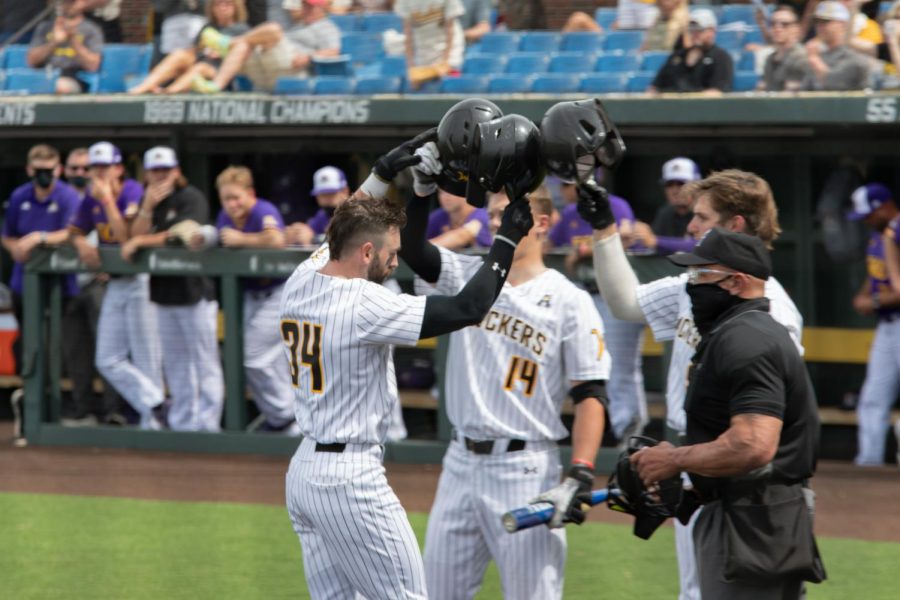 Redshirt senior Corrigan Bartlett celebrates with teammates after hitting a home run against East Carolina on May 1 inside Eck Stadium.

The Wichita State Shocker baseball team traveled down to Orlando, Fl. to face off against Central Florida for an American Athletic Conference series. The Shockers won the series against the Knights, taking three out of the four games.

In game one of a doubleheader on Friday, the Shockers jumped out to an early 2-0 lead after two innings of play. Sophomore Jack Sigrist launched his second home run of the season in the top of the third, to increase the Shockers’ advantage. Sigrist also scored WSU’s first run of the game on a sacrifice fly from Corrigan Bartlett.

Senior Preston Snavely struggled to hold the lead for WSU and gave up four earned runs in 4.1 innings pitched. The Knights would tack on two more runs after Snavely’s exit, before picking up a 6-3 victory in game one of the series. Snavely suffered his fifth loss on the season, while Hunter Patteson picked up the victory for the Knights.

The Shocker offense clicked in the second game, as WSU run-ruled UCF 11-1 in eight innings. Hunter Gibson got the scoring starting for WSU in the top of the first inning, as he launched a three-run homer, to give the Shockers an early 3-0 lead. WSU would tack on another run in the inning on an RBI single from freshman Chuck Ingram.

WSU put the game away in the top of the eight, as they hit three more home runs. Sigrist launched his second homer of the day, giving him three on the season. Gibson followed suit with a two-run homer and his second of the game. Then, Corrigan Bartlett hit a solo home run the ensuing at-bat after Gibson.

In today’s doubleheader the Shockers launched five home run, with four coming in their 11-1 victory in the second game.

Freshman Jace Kaminska continued his hot start for WSU and collected his sixth win of the season. Kaminska pitched six innings while giving up one earned run and five hits. Kaminska also tallied six strikeouts in the win.

In Saturday’s game, Paxton Wallace led the way for the Shockers offense by homering twice in a 10-3 victory. Wallace got the Shocker offense started in the top of the first inning, with a two-run homer, driving in Ross Cadena.

The Knights would answer back in the bottom half of the inning, tying the game at two. The Shockers would respond with eight more unanswered runs to take a 10-2 lead. The rally was highlighted by Wallace’s grand slam in the fifth. Wallace drove in a game-high six run to lead WSU.

M5 | Paxton Wallace (@paxton_wallace) launches a no-doubter grand slam to increase Wichita State’s lead to 10-2 over UCF. The homer is Wallace’s second of the game and the ninth on the season. pic.twitter.com/uxSU7v2N9d

Liam Eddy received the start for WSU and earned his fourth victory of the season. Eddy allowed three earned runs on seven hits with three strikeouts in five innings of work. The Shocker bullpen followed suit as relievers LJ McDonough and Tommy Barhouse combined for four scoreless innings to close out the 10-3 victory.

The Shockers once again jumped out to an early lead in the final game of the series on Sunday, with an RBI single from Hunter Gibson in the top of the first, giving WSU a 1-0 lead. The Knights answered back in the bottom half of the inning with a home run from Gephry Pena.

Seth Stroh would answer with a solo homer for the Shockers in the second inning, but the Knights tied the game at two with an RBI double in the bottom half of the inning. Once again, WSU had a response with a three-run inning capped off by a two-run home run from Corrigan Bartlett, giving the Shockers a 7-6 advantage.

Wichita State baseball hangs on for a 7-6 victory over UCF and takes the series.

The Shockers are now in a tie for third place in the AAC and will return home for a series against USF next weekend. pic.twitter.com/ZggnmrelpT

Aaron Haase earned the victory on the mound after delivering two scoreless innings to close out the series win. Haase allowed just one hit with no walks and three strikeouts.

Next up, Wichita State will play a four-game series against South Florida this weekend at Eck Stadium.

With the Shockers’ series victory against the Knight, they move into sole possession of third place in the AAC.