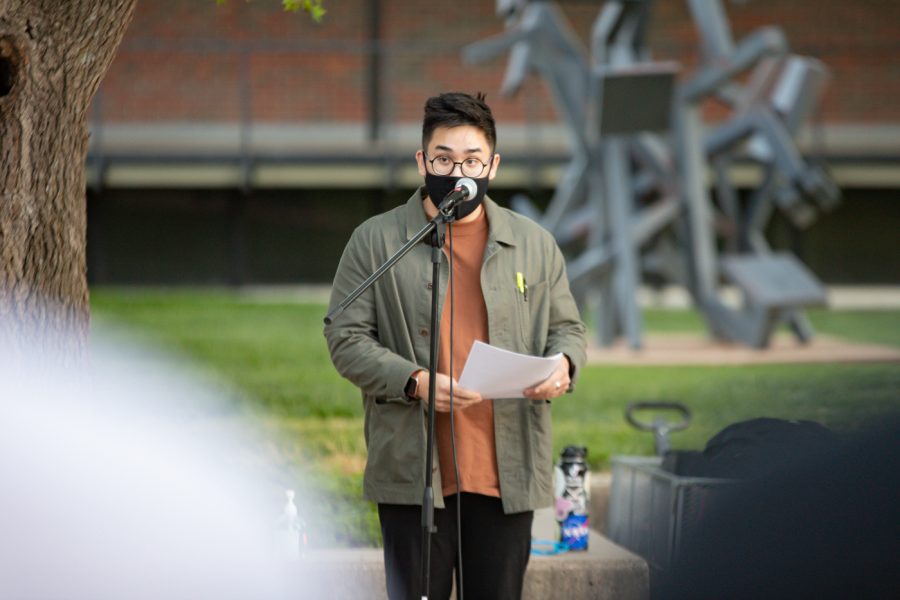 Jordan Cao speaks at the #StopAsianHate vigil on April 30.

Jordan Cao was embarrassed by his ancestry when he arrived at WSU. He was more concerned about fitting in with his American classmates than celebrating who he was, he said.

Recently, Cao planned the vigil for victims of Asian hate alongside members of Chi Sigma Tau — the first Asian American Interest fraternity to have been founded in the Midwest.

It would be the third Asian-centric event he planned and hosted at WSU this year. He said he hoped it would provide the community with a time to heal from this strenuous past year.

So how did a kid who was ashamed of his culture become president of CST? How did Cao go from disengaged to activist?

Just five years earlier, Cao stepped onto WSU’s campus as a rookie Shocker. Whereas most freshmen would be happy to have an upperclassman invite them into their social group, Cao was not. When his elder brother, Alex, was starting his last year at WSU, Cao was beginning his freshman year. Alex was involved with some Asian student groups and wanted his brother to join.

Little did Alex know that just a few months before then Cao had learned from friends that his brother was in an Asian dance group at WSU. Jordan said he was mortified.

“It wasn’t the dancing, it was the Asian part. He had rejected everything that I had absorbed myself into,” he said. “I am the complete opposite now. I live by these six words now, ‘above all else an Asian American.’

Cao said almost all his friends growing up were white. He described the town as affluent and lacking in diversity.

He had wanted to fit in all his life and had no interest in promoting or celebrating his heritage.

He said he doesn’t like to acknowledge the fact that there were many racist microaggressions in the community he grew up in.

“I know that there was no malice intent behind it within my social networks but I would become a target of some sort of racist joke or microaggression,” he said. “But because I was so used to that, I had essentially assimilated my brain.”

He said he had absorbed himself into a culture of whiteness in order to fit in and survive.

“When I graduated (from high school) I came to Wichita State University where my brother was a part of this club – the Asian Student Conference,” Cao said. “He was like ‘yo Jordan, you should do this, you should like join the organization and hang out with us’ and me being the idiot I was, or the close minded individual I was — I was like, ‘f**k no dude.’ I don’t want to do that.”

His social groups were 99% white so it was all he knew.

“Right now, it’s probably the opposite — 99% of my friends are members of my same community that identify the same way I identify culturally,” he said. “I also found myself joining an Asian interest fraternity on campus. So man dude, senior year Jordan would be really pissed at me.”

Cao is a member of Chi Sigma Tau. He joined his sophomore year giving into pressure from his brother.

Cao said the Asian community is pretty apathetic about a lot of things. He said they tend to stay to themselves, stay quiet and just try to keep a comfortable lifestyle.

“Other members of our community, especially the older generation, they like to subscribe to this idea that we are the best of the best but in order to maintain this idea you have to stay as quiet as possible,” he said. “You don’t yell, you don’t make too much noise that can disturb your neighbor, you don’t engage in political activity because that may disadvantage you later.”

Cao said he rejects this stereotype though. The generations have different ideas about what it means to be a good citizen. For Cao it means involvement, action and speaking up.

Cao became the president of ASC last year which he described as a way to give back to his community.

One of the biggest accomplishments of his life was being able to host two conferences at WSU to bring over 500 guests from across the midwest to campus he said.

“We dragged them all the way out here and we engaged in conversations about what does it mean to be an excellent Asian American,” he said. “Where do we move forward with our community? What are issues that we can address, and how can we ensure that this is not a problem for future generations; for our children and our children’s children.”

He said hosting those conferences was a big lifetime achievement because essentially, he had come to WSU with nothing when it came to understanding his culture and community.

The last success of Cao’s of which he is proud happened last Friday evening when the ASC hosted the #StopAsianHate candlelight vigil at the RSC. The event focused not just on remembering and honoring the victims of Asian hate crimes, but also on creating a path for a better future.

“Y’all know what’s been going on the news with like Asian hate so the vigil was a passion project of mine,” he said.

Cao said he spent the last four years trying to bring students from various backgrounds together to promote Asian culture on campus. And he has one piece advice for new students that might be looking at their ancestry, culture, race or identity with shame, uncertainty or dislike.