Shocker Softball secures the No. 1 seed heading into the AAC Tournament 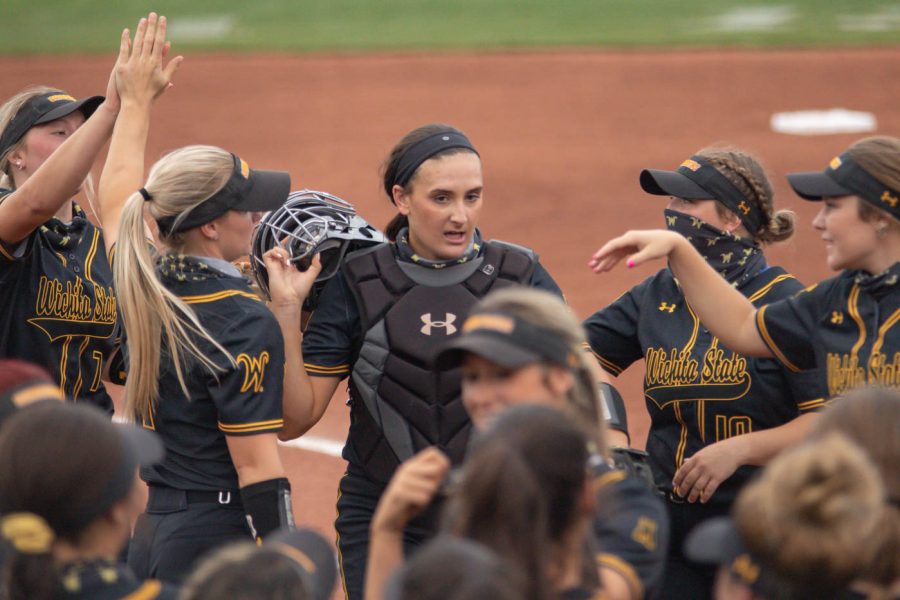 Wichita State senior Madison Perrigan gathers with her teammates during the game against Oklahoma State at Wilkins Stadium on April 27, 2021.

Due to the Shockers being the No. 1 seed in the tournament, they will have a bye in the first round. The Shockers will play the winner of Tulsa vs Houston on Friday, May 14  at 7 p.m.

Senior catcher Madison Perrigan has been a key factor to the team in her time here at Wichita State. She has set the career home run record and with the sight of a national championship slowly getting closer she said she wants to help get it done for the softball program at Wichita State.

“I wanna leave it better than I found it,” Perrigan said. “I always told Coach B I want to get this program farther than it’s ever been by the time I leave and hopefully that’s what I can leave on the field, on my last game here I want to prove to everyone that no matter where you go if you go into a program, work your butt off and invest in it, you can make anything happen, you can make your dreams happen, that’s what I want to leave at Wichita State.”

Head Coach Krisiti Bredbenner said the tournament will have a competitive atmosphere.

“I’ll take whoever,” Bredbenner said. “A definite postseason atmosphere and I definitely think everybody always plays well in this conference tournament. It’s anybody’s ballgame and this is a new season for everybody. We have an opportunity to get that at large and we can’t say that about five other teams in this conference. “It’s going to be a dog fight.”