Ron Baker joins the AfterShocks as its General Manager 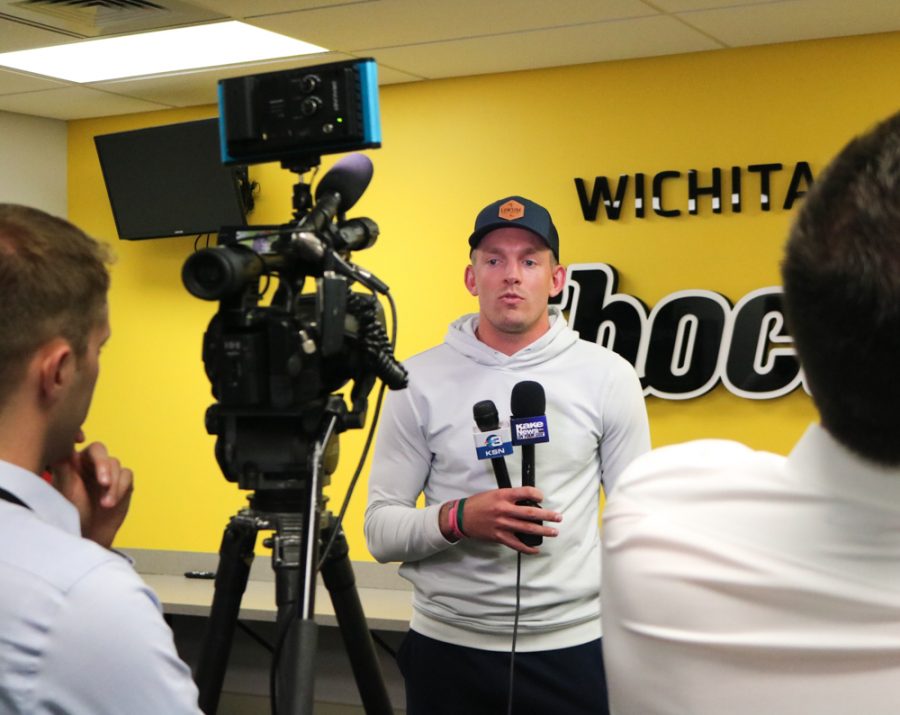 Ron Baker talks to the media after being named the GM of the Aftershocks on Thursday inside the Charles Koch Arena media room.

Former Wichita State men’s basketball player Ron Baker will serve as the General Manager of Wichita State’s alumni team, the AfterShocks, during this summer’s The Basketball Tournament, it was announced on Thursday.

Baker along with other former Shockers, Zach Bush and John Robert Simon will be tasked with assembling a roster to compete in the Wichita Regional from July 16-20.

Baker said that the team had reached out previously to see if he’d like to join but had other commitments at the time.

“In 2019, they actually asked me to be a part of the team in some aspect,” Baker said. “I had a lot going on, I was still training up in New York so unfortunately, I had to watch from afar. JR (Simon), Zach (Bush), and a couple others reached out two months ago, and just so happened in July I had some free weekends. I was happy to be a part of this, it means a lot to not only me but I think our fans, obviously the program itself too.”

Bush and Simon will help assist Baker in assembling the roster for this summer. Bush helped spearhead the recruitment of Baker and is grateful to have him join the team.

“It’s been quite a bit, probably to a point where I was bugging him,” Bush said. “You try to walk that fine line. Thankfully we have a great relationship and have known each other since high school AAU and it’s not like this where I feel I can’t talk to Ron about things so it’s pretty easy. Just getting him to want to be a part of it was really cool, we’re obviously grateful to have him.”

When the tournament came to Wichita in 2019, they broke the all-time regional four-day record for attendance – bringing in 20,000 fans. Opening night drew a TBT record crowd of 7,184 fans.

Baker said that was a key reason he decided to join the AfterShocks for this summer.

“I wasn’t here in 2019 but just watching I could tell that it was electric seeing fans look at ex-players being back out on their home court,” Baker said. “That’s a special memory not only for the players but as fans being involved now with Zach and JR and obviously, the players are going to be like coming back home. Home is where the heart is and if we can win a couple games for our city and give them something they’ll enjoy to watch, that’s kind of our objective.”

The AfterShocks have four commitments for the tournament with Markis McDuffie, Conner Frankamp, Rashard Kelly and Darral Willis Jr. all signed up to play.

Baker said that they have six other former Shockers committed and will announce them over the next couple of weeks.

“We’re going to have an exciting team,” Baker said. “We’ve got six guys that are committed right now. I reached out to a lot of former players already that we’d like to get back on the team. I know they’re excited to come back, I know fans around town are excited.”

Baker spent three seasons in the NBA following the conclusion of his Shocker career. He spent two full seasons with the New York Knicks and finished his NBA career with the Washington Wizards in 2019. Baker most recently played professionally in Russia with CSKA Moscow before being released last May.